Dua Lipa interview: How I released an album from lockdown

Her new album is rooted in the 1980s with references to Prince, Blondie, INXS and Madonna

Four weeks ago, Dua Lipa flew back to London after playing Sydney's Mardi Gras to discover her flat had flooded.

The singer-songwriter rented an Airbnb while the repairs were carried out. Now, she and her boyfriend are stuck there for the duration of the lockdown.

"I'm really enjoying it," she tells the BBC over the phone. "I'm doing stuff that I don't normally get the chance to do, just sleeping in and reading a book and catching up on TV shows."

Sleeping in wasn't supposed be on the agenda this month.

Dua's second album, Future Nostalgia, was primed for release at the start of April, and her diary for the rest of 2020 was packed - with a world tour, a Glastonbury slot and an appearance on Saturday Night Live all scheduled for the coming weeks.

But while artists like Lady Gaga, Sam Smith and Haim have delayed their albums due to the coronavirus, Dua chose to bring hers forward, giving it to fans a week earlier than planned. 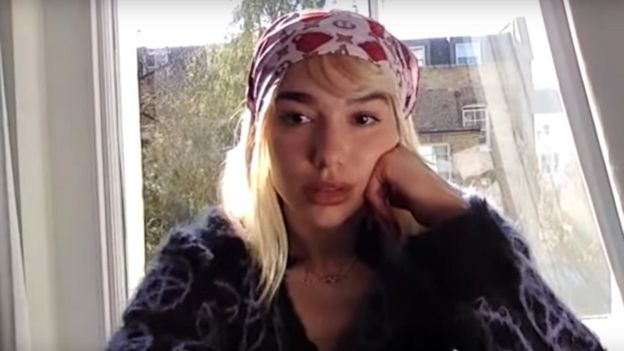 The star has been chatting to fans from lockdown in London

It wasn't an easy decision. The star was in tears as she announced the news in a YouTube livestream, not least because the album had leaked online (a situation she later described as "a pain in the arse").

Ultimately, she thinks it was better to set the record free instead of worrying about the "perfect" release strategy.

"I made this album to get away from any pressures and anxieties and opinions from the outside world," she says.

"Yes, it was made to be listened out in the clubs and at festivals - but at the same time, I wanted to give people some happiness during this time, where they don't have to think about what's going on and just shut off and dance.

"Maybe it had to just come out now, rather than later."

Future Nostalgia is currently heading to number one in the UK and the top five in the US. It's also one of the highest-rated albums of 2020 so far, with an average score of 88 on Metacritic.

As the title suggests, it sounds like a throwback record from the year 2050 - its laser-gun pop melodies fused with squelchy funk basslines and disco grooves.

Dua dreamt up the concept in late 2018 as she walked around the strip in Las Vegas.

"I'd already started working on the record and I knew I wanted it to reflect my childhood influences, but I hadn't quite figured out what direction I wanted to go," she recalls.

"I had my headphones in and was out walking to clear my head, when I was like, 'Oh, I know, Future Nostalgia could work.'

"At first I worried it was too on the nose, too literal, but by the time I'd gone back to my hotel, I'd solidified it in my head.

"I messaged my manager and said, 'I've got my album title, I'm going to start working backwards from there.'" 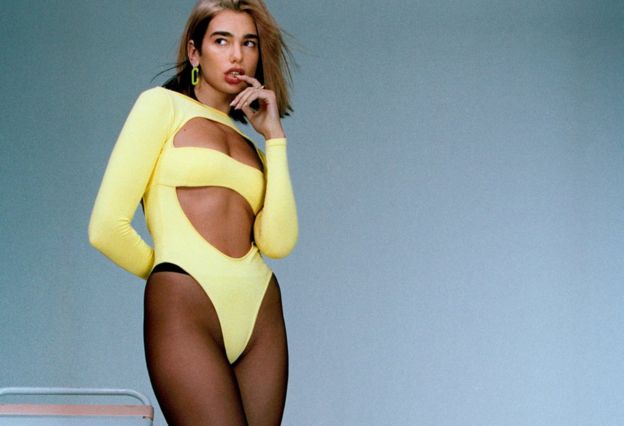 The first song to capture the essence of that idea was Levitating, a euphoric roller-skating jam that clocks in at 103bpm, the same sweet spot as the Bee Gees' Night Fever.

"It was the song that helped shape the record," says Dua, who got "so excited" in the studio that the recording session became an impromptu party.

"We ate so many doughnuts that we were literally levitating because we were so high on sugar," she told fans in a Q&A session last week.

'People see you as manufactured'

Unlike her self-titled debut album, she has a writing credit on every song. As a result, you get a clearer picture of the star's personality - smart, strong-willed, passionate and really, really committed to dancing.

"With my first record, I was lucky to get songs like New Rules and Be The One that I didn't write, but which were also massive parts of my career," she says. "But I also felt like I had a lot of proving to do.

"For a pop artist, people can see you as manufactured, and that you just get a writing credit for turning up. But, for the songs I did write, I was in those sessions and they are my personal experiences. And that's something I wanted to get across in every interview I did." 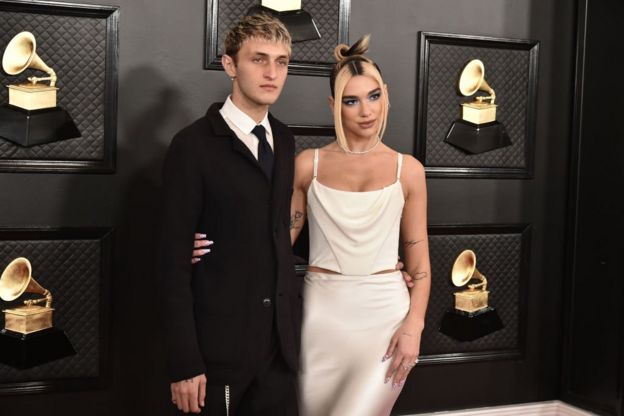 The star attended this year's Grammys with her boyfriend Anwar Hadid

This time, Dua says she didn't go in with an attitude that she'd reject other people's songs. It just turned out that she was "very inspired and knew exactly what I wanted to say".

That's clearest on the two songs that bookend the album. Both look at different aspects of feminism, with the agenda-setting title track declaring: "I know you ain't used to a female alpha."

"I'm not suggesting that's what I am," she says. "But when you sing that song, you want to feel stronger and more empowered."

Closing the album is the more reflective Boys Will Be Boys, which voices the everyday fears women face but men rarely have to think about - from being ignored and treated as inferior to the threat of violence.

One striking line about "putting your keys between?your?knuckles" was borne of real-life experience.

"I remember walking home, especially in the winter time, when I was getting off my bus and just trying to get to my flat, which was a three minute walk from the bus stop, and just being petrified of boys on bikes cat-calling around the estate," recalls the singer.

She included that line to speak directly to her female fans "so they feel seen and feel heard and know that we all go through the same things".

The song is the fulfilment of everything Dua has been saying about feminism since New Rules catapulted her to global fame three years ago.

She's spoken out about abortion rights, criticised the treatment of women in Saudi Arabia, and presented a "five-point plan for the music industry to evolve" at the Cambridge Union.

Even at the Grammys, where she won best new artist in 2019, she used her time at the podium to criticise former Recording Academy president Neil Portnow, who said women needed to "step up" if they wanted fairer representation at award shows.

"I get a lot of backlash for speaking out, but these are things I'm passionate about - and that's that," she says. A lot of other pop stars would bite their tongue or shy away from such confrontation. 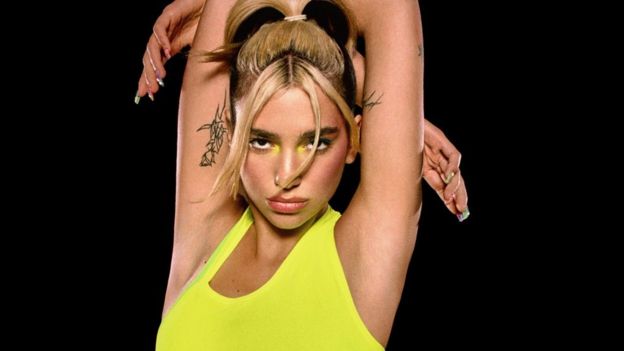 "I didn't feel the need that I had to get someone to write the songs for me."

Tenacity, however, is in her blood. Born in London, her Kosovan-Albanian parents took her back to Pristina at the age of 13 - but she lasted just two years before returning to the UK, alone, to pursue her dream of becoming a singer.

"I didn't feel like there was enough opportunity for me to be able to do this from Kosovo.

"So when I moved back to London at the age of 15, I was still going to school, but I thought, I'm going to use social media to my advantage and I'm going to put some covers online.

"Deep down I wanted to have that Justin Bieber effect where someone would find me on YouTube!" 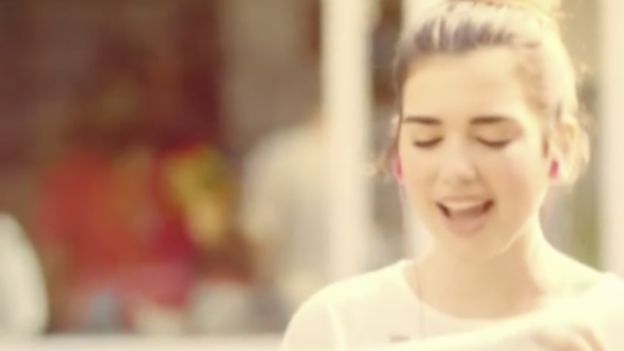 To earn money for music sessions, she worked in restaurants and nightclubs, eventually scoring a record contract at the age of 18.

Her debut album was delayed three times as she struggled to gain traction on the charts - but by February 2017, she had three singles in the top 15 simultaneously.

That summer, New Rules sent her career into the stratosphere. The pastel-coloured message of female camaraderie in its video - girls leaning on each other, looking after each other and supporting each other - crystallised everything that made Dua Lipa unique.

The experience also helped her define who she wanted to be as an artist.

"I feel like I'm very much more in touch with who I am now," she says. "I have a very clear idea of what I'm doing and what I want to say. Things I'm not afraid of."

That confidence set the tone for Future Nostalgia. She put the record on ice after it was finished so she could concentrate on the visuals (the album cover literally puts her in the driving seat) and work on her choreography.

'The best I could be'

"I knew what I had to do to be the very best I could be, so I made sure I had a significant amount of time to be able to do that."

The change was apparent when Dua performed her comeback single Don't Start Now at the MTV Europe Music Awards last November. Fans who'd previously made fun of her stage presence were won over by the dance moves and staging.

It was, she concedes, "the first time I came off stage and felt really proud of myself".

From that moment, everything about Dua's second album went to plan - until coronavirus struck. So she must be gutted that her plans for the rest of the summer have been obliterated?

"My aim for this album was always to make songs that would live for a long time. So once all this blows over, I'm really hoping to pick up where I left off and be able to go out and do festivals and perform these songs and do some club shows just for the hell of it."

And if Dua Lipa wants something to happen, you can almost guarantee it will.

Public Enemy split was a hoax
Previous Item
NEXT

OJ: Made in America Series
Next Item