Overeating was once part of my job. I spent a good chunk of my early 20s as an editor at Maxim magazine, then in its heyday. While there, I witnessed and engaged in all manner of dumb young “masculine” activities, mostly involving imbibing or consuming something to excess. I once almost choked to death eating a heaping spoonful of cinnamon (it’s terrifying). I stood in a circle and cheered as two colleagues competed to see who could eat the most protein bars, the winner later admitting that he didn’t pass solid waste for at least a week afterwards. I lost a beer chugging contest to actor James Marsden at a press junket because he dared me to. 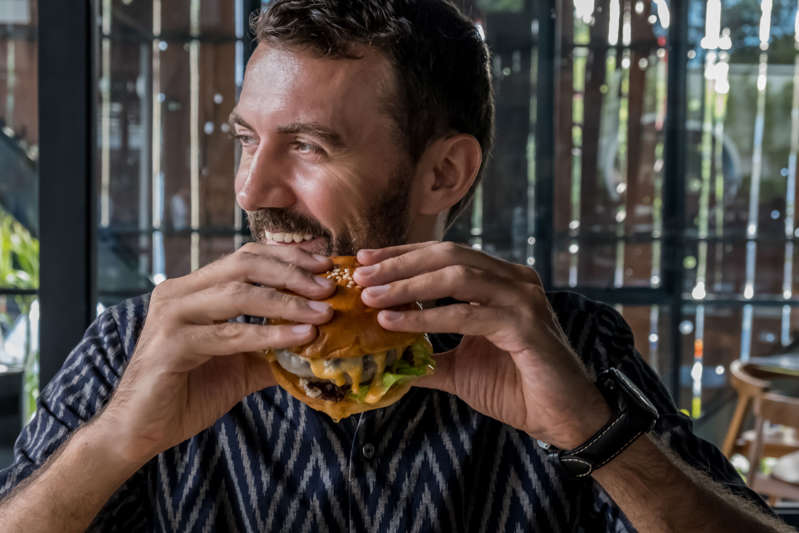 Men have an innate need to prove their hardiness. It’s primal and genetic. But despite what pop culture has led you to believe, the average guy doesn’t engage in fistfights all that often, if at all. So we seek other ways to prove our worthiness as a mate – opening jars, building things around the house (IKEA furniture at the very least), and being able to tackle food challenges.

The need to prove you can “hold your liquor” comes from the same well as being able to scarf down excessive amounts of any food. Warriors of the wasteland don’t eat sensible portions, and they certainly don’t have food allergies. After all, No one ever asked Conan the Barbarian, “What is best in life?” “To crush your enemies, see them driven before you, and eat something prepared in a tree nut-free facility.”

Think about how you’ve seen most medieval or fantastical kings portrayed on film or television. They are usually burly, bearded men shouting spittle-drenched orders in between bites of turkey legs the size and shape of bowling pins. They retire to their chambers expecting the company of pliant, comely ladies even as they sweat grease into the linens and breathe as though their esophagus was coated with peanut butter and insulation. Gluttony used to be a sign of success. You ate a lot because you had a lot, and could provide a lot. That’s why gout is the disease of kings. The increase of uric acid that causes it is due to eating too much rich food.

History is full of men filling their bellies to excess. But, before I go further, it is necessary to say that binge eating or overeating can be a real and serious disorder. It is a compulsion that often comes from stress or underlying disease and can be dangerous. Is there overlap between some of that and the tendency for men to prove their mettle by eating more mozzarella sticks than the guy beside them? Certainly. And those with the disorder should seek help. Treatment plains are available. But, here, I am looking into the tendency men overeat on occasion to prove their manhood.

One glimpse: A study published in the Evolutionary Psychological Science journal in March 2016 found that men tended to eat more when in the presence of women. The study claims “that men eat more food when sharing a meal with women than with men. Notably, men appear to eat larger quantities of both unhealthy (pizza) and healthy (salad) food when in the company of women. More specifically, men eating with women ate 93 percent more pizza (1.44 more slices) and 86 percent more salad.” Women, meanwhile, don’t seem to change their habits much depending on dining companion.

So there is an element of showing off in addition to appearing hearty, a posturing by way of packing it in. We’ve been taught the insipid notion that to appear fastidious or fussy is somehow not manly. Action heroes, in the words of First Blood’s Col. Trautman, “eat things that would make a billy goat puke,” refuse medical attention, and never, ever, order dressing on the side.  Abstaining from meat altogether – especially red meat – used to be an automatic null and void to manly cred. Much like other masculine traits such as bottling up emotions or not going to the doctor, this notion is as silly as it is outdated, which may be why it’s becoming relegated to circus sideshow status.

While not limited to men alone, the eating competition is, in short, the perfect Venn diagram of lizard brain male thinking. Consume massive amounts of food in front of hordes of people while also trying to out do an opponent? It’s almost laughable in its gladiatorial simplicity.

But there’s also something a little less burly behind our obsession with it.

In one of his classic bits, late comedian George Carlin ran down what he considered the only true sports (baseball, basketball, and football) and then went on to explain why everything else fails to qualify. When he gets to running, he rants, “Running isn’t a sport because anyone can do it! Anything we can all do can’t be a sport. I can run, you can run. My mother can run, you don’t see her on the cover of Sports Illustrated, do you?”

It’s funny, but it’s also the psychology behind the eating competition. It’s not that it’s gloriously gluttonous or proof of barbarian virility – it’s just that, literally, anyone can do it, or at very least relate to it. Richard Shea, the president of Major League Eating, explained to California’s Mercury News in 2017 that eating competitions are, if nothing else, at least democratic. “We all eat. You and I know what it means to eat a couple hot dogs, so you can benchmark it,” said Shea. “But to see someone eat 70 hot dogs in a sitting — it’s stunning.”

This sentiment was shared by perhaps one of the most famous gluttons on the planet (at least when the cameras were rolling), Adam Richman, the original host of Food Network’s Man vs. Food. In a 2012 interview with the UK’s The Guardian, Richman admitted that the drive to take on food challenges is a way for the non-athletic to engage in strenuous physical activity.

“We can’t all play basketball like Kobe Bryant or footie like Wayne Rooney,” Richman told The Guardian, “but we can all do some pretty significant damage to a delicious meal. I think that at our hungriest, or sometimes at our most inebriated, people surprise themselves at what they’re able to eat.”

Whether to show off, prove heartiness, or engage in the most common denominator level of “sport” imaginable, many men will go to great lengths to stuff themselves. Things like regret and consequences are kicked down the road to worry about later. You chug, you eat, you let out a barbaric yawp – that is what men are supposed to do now that they no longer need to hunt, gather, and conquer. For some, the battle axe has been replaced by the hot wing. The field of combat replaced by Nathan’s Hot Dogs in Coney Island. And the conquering hero replaced by a Polaroid of a guy in a mustard-stained T-shirt grinning as he fights back the vomit on the wall of a roadside diner. His own personal Valhalla.

So, before you bust out the sweatpants to have more give at the Thanksgiving table or enter into a wing-eating competition with your buddies, consider the motives. We’re past the age of kings and know far more about cholesterol levels and clogged arteries. We also know more about the mechanisms behind over-mastication. Is a friendly food throw-down between friends all that bad? On the rare occasion, no. We all submit to our baser instincts now and again. And who doesn’t love a good competition? But, in the meantime, maybe just order a salad.

The post Why Men Take So Much Pride in Eating a Lot of Food appeared first on Fatherly.