No-deal Brexit: What is the UK government doing to prepare?

The government says it is scaling up preparations for a no-deal Brexit on 31 October.

A week after taking office, Prime Minister Boris Johnson pledged an extra £2.1bn specifically to prepare for leaving the EU without a deal.

Prior to this, the government led by Theresa May had promised £4.2bn to prepare for a range of Brexit scenarios.

The extra £2.1bn will fund preparations including:

So what has the government already done to prepare?

At the end of June, the Department of Health and Social Care (DHSC) started a new process of "securing" freight capacity, warehouse space and fridges in order to stockpile medicines.

Of the £2.1bn pledged for no deal preparations, £434 million has been set aside for this.

Ahead of the UK's original departure date of 29 March - then extended to 12 April - the DHSC said thousands of medicines had been analysed to work out what might be affected by supply disruption from the EU.

Suppliers stockpiled an additional six weeks' worth of these drugs over and above the usual "buffer" stock. 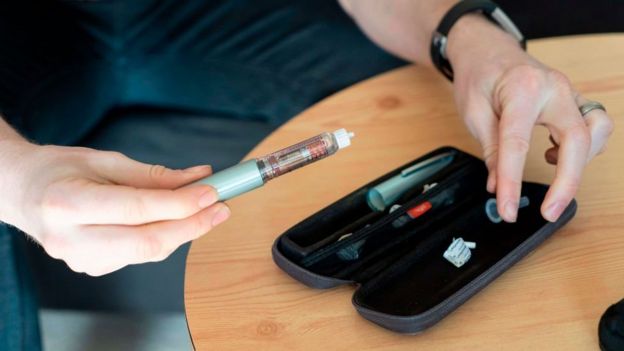 The same approach was being taken with vaccines as well as blood and transplant products.

The DHSC had also agreed contracts for extra warehouse space with refrigeration capacity to store these supplies.

This exercise is being repeated to ensure the department is "as prepared for leaving the EU without a deal in October as it was on 29 March and 12 April".

It is looking to secure an express freight service to bring in emergency medical supplies within 24 hours where medicines can't be stockpiled or "a suppliers' own logistics plans are disrupted".

There have been warnings of significant disruption in a no-deal scenario, because lorries travelling between the UK and the EU will need to complete custom declarations.

On top of this, certain goods from the UK - such as food and plant products - arriving at EU ports may also require physical checks, under EU single market rules.

The Port of Dover in Kent handles approximately 10,500 lorries a day and the worry is that extra checks could lead to bottlenecks, leading to many miles of tailbacks.

Independent modelling has estimated that two minutes of extra processing time for each lorry would lead to tailbacks of 17 miles.

Operation Brock is the name of the plan to hold up to 2,000 lorries heading for mainland Europe in a queue, while keeping other traffic flowing around it - a contraflow system.

Extra funding for the operation was included as part of the £2.1bn pledged by the prime minister at the end of July.

A fallback option would be to divert lorries to the disused Manston airfield, near Ramsgate - and use it to hold up to 6,000 lorries on the runway at any one time. 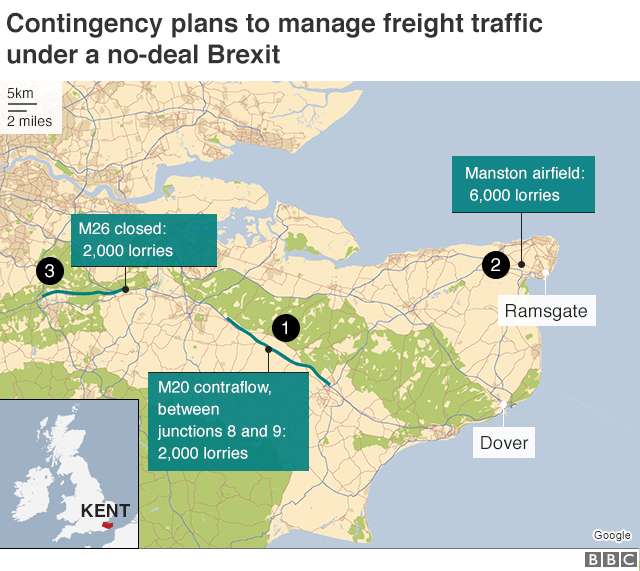 If further capacity was still required, a "last resort" would be to turn the M26 into a temporary lorry park. The M26 is a 10-mile motorway connecting the M25 at Sevenoaks and the M20, near West Malling.

Under this scenario, the M26 would be closed to normal road users and lorries would park on the carriageway. Kent County Council believes this option could accommodate an additional 2,000 lorries.

On 15 April, following the Brexit delay to 31 October, the contraflow on the M20 was removed to restore capacity on the motorway.

But Highways England said a steel barrier installed to implement the contraflow would remain in place "should Operation Brock be required again in the coming months".

The government published a "tariff schedule" - a list of the taxes placed on different types of products when they are imported from other countries - in March. It removed most tariffs on imports in the event of a no-deal Brexit.

The British Retail Consortium has warned there could be gaps on supermarket shelves if there is disruption at the border.

On 13 March, the UK government published its contingency plan to avoid a hard border (ie physical infrastructure) in Ireland in the event of a no-deal Brexit.

Under the plans, the UK said it would not bring in new checks or controls, or require customs declarations for any goods moving from Ireland to Northern Ireland, in the event of no deal.

But this will only be a temporary measure while negotiations take place to find longer-term solutions. The UK government says its contingency plan recognises "the unique social, political and economic circumstances of Northern Ireland".

To protect people's health, some plant and animal products that come into Northern Ireland from outside the EU, via Ireland, will still need to be checked. The UK government has said these checks will not happen at the border itself. But it has not specified exactly where they will take place.

It remains unclear what will happen to goods travelling from Northern Ireland to the Republic of Ireland. Under EU rules, checks would normally be required at the point certain goods enter the EU single market (such as at the Irish land border).

The Irish government says it is securing additional space and has recruited more customs and agriculture staff to allow for a "significant increase in checks and procedures" at the border.

While each government department has its own plan to manage the effects of no deal, these different efforts will need to be co-ordinated.

It was designed as a way for the government to take control and quickly co-ordinate different agencies to handle any short-term disruption.

And it covered 12 areas. including transport, healthcare, energy, food and water.

Operation Yellowhammer was based on worst-case scenario assumptions - delays at the border over a six-month period, increased immigration checks at EU border posts, reduction in choice and availability of food, and potential price increases for utilities, food and fuel.

The government could use this central command to prioritise fuel to essential services or to relax rules limiting the working hours of HGV drivers, for example.

On 18 August, an Operation Yellowhammer dossier leaked to the Sunday Times said that the UK could face months of disruption at its ports after a no-deal Brexit.

The Sunday Times said the document - which has not been seen by the BBC - was based on the "most likely aftershocks of a no-deal Brexit".

It set out scenarios including freight disruption at ports lasting up to three months, caused by customs checks, before traffic flow improves to 50-70% of the current rate.

And it said there could be a rise in public disorder and community tensions resulting from a shortage of food and drugs.

Cabinet minister Michael Gove, who is responsible for no-deal preparation, said the report outlined a "worst-case scenario". He added that his government had stepped up no-deal planning over the past month.

The Prime Minister, along with other of his Conservative colleagues, has referred in the past to "side deals" with the EU which will make no deal easier.

It's not the case that the UK and the EU have any no-deal agreements or "side deals".

The UK government has published a series of no-deal notices which detail guidance for businesses and ports on how to prepare.

It has also published a paper confirming the rights of EU citizens already living in the UK - and their families - to remain.

On the other side, the EU has also passed a series of regulations to prepare for no deal, for example allowing planes to fly from the UK to the EU, and road hauliers to operate in the EU for nine months.

The EU has described these as "temporary in nature, limited in scope and will be adopted unilaterally by the EU. They are not 'mini-deals' and have not been negotiated with the UK."

One step closer to clean energy

Campaigns end as in Togo

Progress at Last for Kingdom of Eswatini
Next Item