The pace of change in Ethiopia has been so fast since Abiy Ahmed became prime minister in April 2018 that it is almost like observing a different country, and this is why he has been awarded the Nobel Peace Prize.

The reforms he has introduced were unthinkable not so long ago.

For many years, the government seemed impervious to criticism from human rights groups that the state stifled free expression, sidelined and imprisoned opposition leaders and cracked down on protests.

It also appeared steadfast in its disagreement with a border commission ruling that was meant to end the two-decade conflict with neighbouring Eritrea.

But all that has changed. 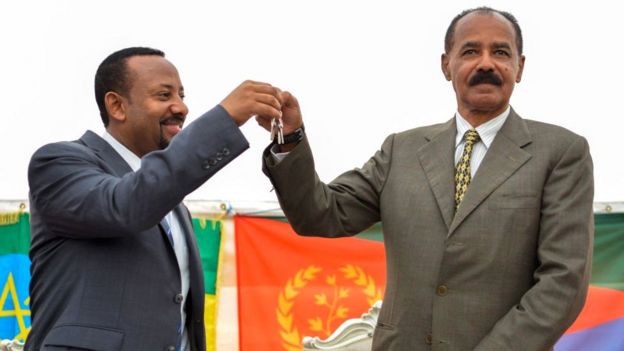 In the first few months after he came to power, following the unexpected resignation of his predecessor Hailemariam Desalegn, Mr Abiy lifted the state of emergency, ordered the release of thousands of prisoners, allowed exiled dissidents to return home and unblocked hundreds of websites and TV channels.

He also ended the state of war with Eritrea by agreeing to give up disputed border territory, in the process normalising relations with the long-time foe. 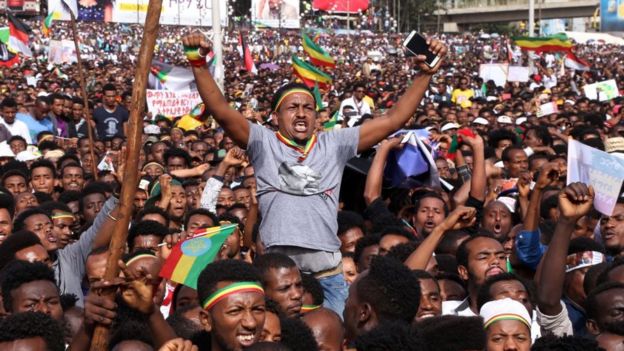 There have been massive rallies to support the prime minister's reforms

Opposition to his reforms

But not everyone is happy with the pace of change.

In June 2018, Mr Abiy was targeted in an attack, with two people killed in an explosion at a rally held to show support for him, and there is some opposition to him in the Tigray province which used to dominate the country.

Later that year, a group of soldiers, some of them armed, marched to his office to demand a pay rise.

Initially, a photo of him doing press-ups with the soldiers led to him being praised for managing to defuse a potentially dangerous situation. 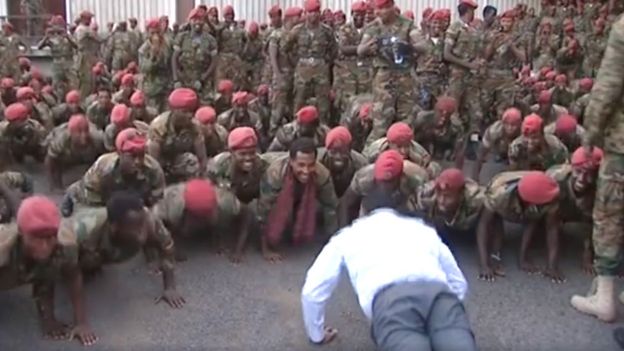 However, he later said that some of them had wanted to kill him - a reminder of the extent of the opposition his reforms have attracted in some quarters.

And after some of the state's tight controls were lifted, the simmering ethnic tensions in this diverse country boiled over into violence which has forced some 2.5 million people from their homes.

In June 2019, two of Mr Abiy's close allies were killed in what was described as an attempt to seize control of the Amhara region, scene of some of the worst violence.

Who is Abiy Ahmed?

Mr Abiy's background is crucial to the way people view him.

He is the country's first Oromo leader - the ethnic group at the centre of nearly three years of anti-government protests, which left many dead and thousands arrested following clashes with security forces. 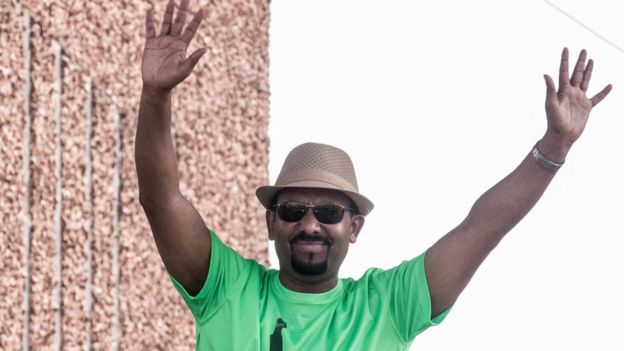 One of the protesters' main complaints was that they had been politically, economically and culturally marginalised for years - despite being the country's largest community.

The coming to power of Mr Abiy, who is believed to have huge support among the Oromo youth as well as other ethnic groups, has begun to change that.

He is leader of the Oromo People's Democratic Organisation (OPDO), one of the four ethnic parties which make up the ruling Ethiopian People's Revolutionary Democratic Front (EPRDF) coalition.

The 42-year-old, who was born in the city of Agaro in Oromia and comes from a mixed Christian-Muslim family, joined the OPDO in the late 1980s.

In the military he rose to the rank of lieutenant colonel, before becoming the founder and director of the country's Information Network and Security Agency, which is responsible for cyber-security in a country where the government has always exercised tight control over the internet.

After that he became the minister for science and technology.

He has promised to free up the telecoms sector, which is currently dominated by a state-run monopoly.

However, old habits seem to die hard and in June 2019 the internet was blocked throughout the country for several weeks. The authorities never gave a reason but it coincided with national exams and may have been a draconian attempt to prevent cheating.

The speed at which he has been changing Ethiopia has been unprecedented but should not be a surprise.

He laid out his political vision in comments made to the Southern Ethiopian People's Democratic Movement's (SEPDM), a constituent party of the ruling coalition, in October 2017

"We have only one option and that is to be united, not only cooperating and helping each other but uniting in order to live together. The other option is to kill each other," Mr Abiy is quoted as saying.

"However, no sane person will opt for this. So, our option should be to trust one another, heal our wounds together and work together to develop our country."

What does the opposition think?

When Mr Abiy came into power, he was seen by many as outspoken and competent, with a participatory leadership style. It left opposition figures cautiously optimistic about the future, as long as he tackled the issues behind the unrest. 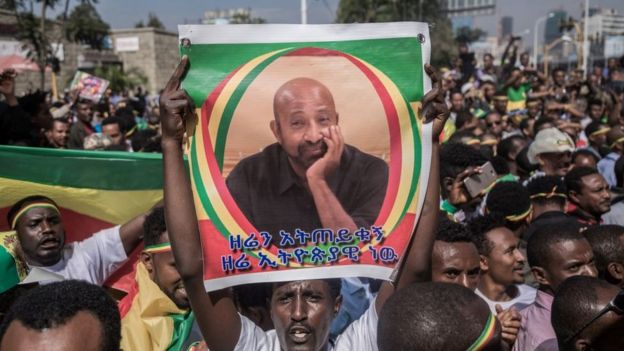 Opposition leader Berhanu Nega was feted on his return in September

Opposition leader Berhanu Nega, once branded a terrorist in Ethiopia, has returned home, pledging that he will work closely with the government "to stabilise the country".

But he was not giving a free pass to the prime minster, saying that "many institutions and many laws" need to be reformed to create a meaningful democracy.

Ethiopia has had general elections every five years since 1995, but in the last vote in 2015 not a single opposition MP was elected.

Journalist and activist Jawar Mohammed was at one time accused of stoking anti-government protests. He has ended his exile and described Mr Abiy's appointment as "a unique opportunity [for a] peaceful transition to democracy".

Yeshiwas Assefa, who leads the opposition Blue Party, told the BBC: "The main point is he has to be someone who understands the demands of the public and the public's desire for change... He has to reform institutions in dire need of reform."

The next elections are due in 2020, and will be keenly watched to see if the reforms do mean that opposition parties are free to campaign against Mr Abiy and the governing EPRDF, in a way that was previously impossible.

CPP need a realists as a General Secretary

Focus on her record not insults

Kenyan schools to stay closed until 2021

NDC victory on the horizon- Bedzra
Previous Item
NEXT

SA’s Gupta brothers sanctioned by US
Next Item