Group photo of Ghanaian veterans with Staff of the British High Commission in Accra, Ghana

Remembrance Day 2019 luncheon in Ghana remembers the service and sacrifice of British and Commonwealth Armed Forces and veterans in Ghana.

At the going down of the sun and in the morning. We will remember them.

The luncheon, attended by Hon. Dominic Nitiwul Defence Minister of the Republic of Ghana, brought together armed forces veterans, business leaders, and representatives of the Commonwealth nations involved in the First and Second World War conflicts. The event paid tribute to all those who put aside cultural and national differences to serve and sacrifice for the Commonwealth, whilst celebrating Veterans and today’s Armed Forces who are inspired by them and continue the proud traditions of service and achievements of those who have gone before.

For over a century, the UK and Ghana have stood shoulder-to-shoulder in support of global peace and security. Last year we remembered the Centenary Anniversary of the Great War, where in West Africa, the first soldier in British service to fire a shot in First World War was RSM Alhaji Grunshi of the Gold Coast Regiment. We should never forget the sacrifices made in that war or in the Second World War that began 80 years ago in 1939. Those sacrifices made by all previous generations made will continue to be honoured; those that have served before us will not be forgotten.

Today Ghana is a top ten contributor of personnel on UN and African Union Peacekeeping operations, and has deployed forces as part of the African response in support of democracy in the Gambia, stability in Somalia; and peace in South Sudan – where Ghanaians serve alongside British peacekeepers as part of the UN Mission in South Sudan (UNMISS). These Ghanaian Women and Men continue to step forward, as examples to all, to protect not only Ghana but to promote regional peace. 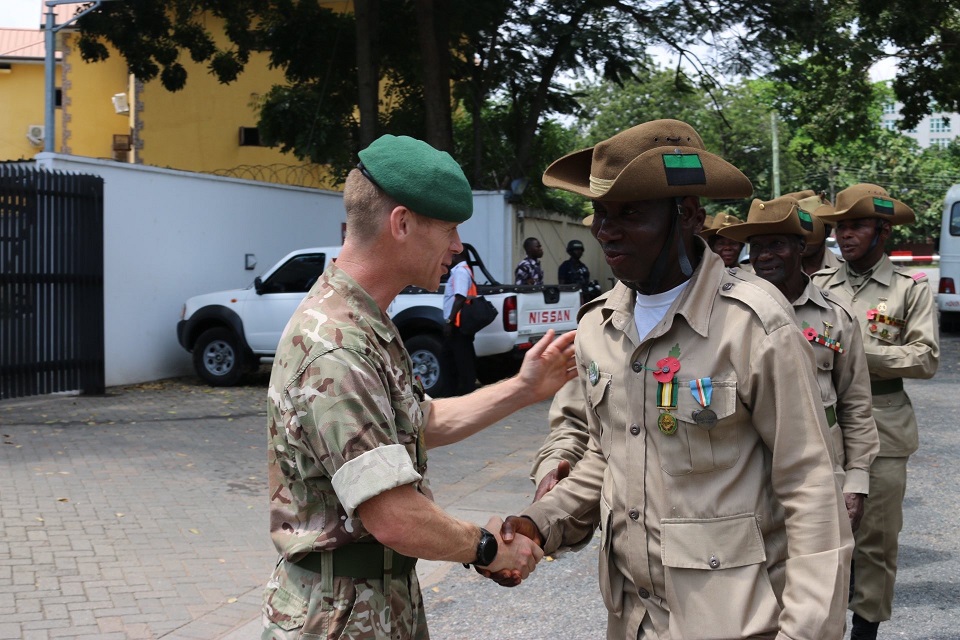 Today’s generation of Ghanaian and British soldiers who serve alongside on operation and within the British Armed Forces, do so to protect global security and defend our shared vision of a more peaceful world. Today we have some 4,500 Commonwealth Service Personnel in the British Armed Forces. Examples such as Ghanaian-born, Major Nana Kofi Twumasi-Ankrah, the first black Equerry to serve Her Majesty Queen Elizabeth II embody the invaluable contribution of the Commonwealth.

These are just a few examples of the many thousands of Ghanaian soldiers who fought, and continue to fight, for the freedoms that we enjoy today. We shall not forget their sacrifice and duty. We will remember them.