The US Supreme Court is to hear arguments in the case of an Obama-era immigration programme the White House has sought to end since 2017.

The top court took up the case after lower courts ruled the administration did not adequately explain why it was ending the programme.

A decision is expected in 2020, months before the presidential election.

The lower court rulings do not contest the administration's right to end Daca, but they have criticised its "capricious" explanations for why it was doing so.

However, the case could lead the Supreme Court to issue a key ruling on a president's power regarding immigration policy.

Immigration has been one of President Donald Trump's signature campaign issues.

The Daca programme affects an estimated 700,000 young people who entered the US without documents as children. Another million people were eligible but did not apply for the scheme.

Most of them are from Mexico and other Latin American countries.

In order to qualify for Daca, applicants under the age of 30 are required to submit personal information to the Department of Homeland Security (DHS), including addresses and phone numbers.

They must go through an FBI background check and have a clean criminal background, and either be in school, recently graduated or have been honourably discharged from the military.

In exchange, the US government agrees to "defer" any action on their immigration status for a period of two years.

It is only available to individuals residing in the US since 2007.

Who is for and against ending Daca?

The Trump administration has argued that President Obama did not have the authority to create the Daca programme through executive order, though Mr Trump has appeared sympathetic to the Dreamers' plight.

Does anybody really want to throw out good, educated and accomplished young people who have jobs, some serving in the military? Really!.....

Mr Trump successfully ordered DHS to stop accepting new applications in 2017, but his second order to end renewals for Daca recipients was blocked last January and is the one up before the Supreme Court.

In 2018, the then-DHS Secretary Kirstjen Nielsen wrote that the programme should end as it is "critically important for DHS to project a message that leaves no doubt regarding the clear, consistent, and transparent enforcement of the immigration laws against all classes and categories of aliens".

The White House has tried to negotiate with lawmakers on a plan to allow the undocumented immigrants a path towards citizenship in exchange for funding for Mr Trump's border wall with Mexico to no avail.

Two out of three US adults back Daca, according to surveys conducted last year. 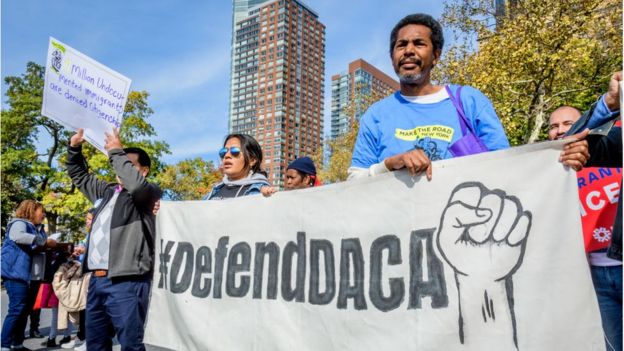 A poll conducted in June by the president's preferred news outlet, Fox News, also found most voters support allowing Dreamers to stay in the US.

Democrats strongly support the programme, and are joined by moderate Republicans.

A number of companies and Silicon Valley leaders have also backed Daca, including Microsoft, who joined one of the lawsuits being heard by the court on Tuesday.

But many of President Trump's right-wing supporters are against protecting Daca recipients.

Mr Trump tried to end other immigration programmes, including the Temporary Protected Status (TPS) for 200,000 migrants from El Salvador and the diversity green card lottery, but both moves have become mired in court battles.

What could the Supreme Court do?

If the Supreme Court agrees with the White House's claim that Daca was an unconstitutional use of presidential power to begin with, it could limit the power of future presidents to issue similar immigration orders.

The court could also eventually uphold the lower court's decisions that the Trump administration did not offer sufficient explanation for ending Daca, and the White House would need to re-submit its explanations for ending the programme.

Or, the Supreme Court could overturn the lower rulings, allowing the administration an easier path forward.

The justices have been split along ideological lines in recent decisions regarding immigration, including Mr Trump's travel ban on mostly-Muslim countries and the attempt to add a citizenship question to the 2020 census.

In both cases, Chief Justice John Roberts was the deciding vote; he sided with the conservatives regarding the ban, but with liberals on the census.

The Supreme Court will hear arguments on Tuesday and deliberate until next summer.

One of the lawyers appearing before the justices to argue in favour of Daca is Luis Cortes, a 31-year-old recipient of the programme, who told CNN: "I will be looking at nine individuals who will ultimately decide whether my clients will be deported and me with them."

In the meantime, Republicans and Democrats in Congress can attempt to reach a deal regarding the Dreamers.

If the programme is dismantled, Dreamers would again become undocumented, losing their work permits, health insurance and in some states, their drivers' licences.

Or, lawmakers could agree upon a law to protect Dreamers, whether through Daca or a similar programme.

Mr Trump tweeted last month if the Supreme Court does not let Daca stand, "the Republicans and Democrats will have a DEAL to let them stay in our Country, in very short order".

President Obama said that he did not have the right to sign DACA, that it will never hold up in court. He signed it anyway! If the Supreme Court upholds DACA, it gives the President extraordinary powers, far greater than ever thought. If they do what is right and do not let......

....DACA stand, with all of its negative legal implications, the Republicans and Democrats will have a DEAL to let them stay in our Country, in very short order. It would actually benefit DACA, and be done the right way!

Two-Thirds of Zimbabweans to need aid