Trump impeachment inquiry - what to look for

Trump has decried the impeachment effort as politically motivated

The US impeachment inquiry emerges from behind closed doors at last.

For more than a month, the process - which could end in a Senate vote on Donald Trump's removal from office - has been shrouded in mystery.

The biggest revelations have come from leaks, anonymous media reports and voluminous deposition transcripts where even the most explosive and revealing moments can be drained of drama when presented on the written page.

That all changes on Wednesday.

Here are four things to keep in mind as the lights go up and the cameras turn on in the House Intelligence Committee hearing room.

Are the witnesses credible?

It's unlikely there will be many surprises in the testimony offered by the three witnesses scheduled to testify this week.

The bombshells, for those who want to view them as such, have already exploded. The allegations of an exchange of favours (a quid pro quo) and a shadow foreign policy have already been disclosed and picked over. 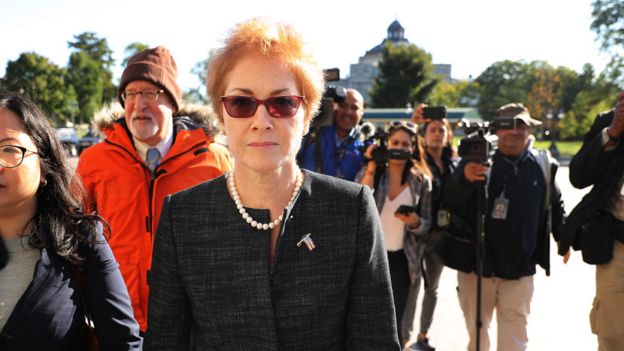 Marie Yovanovitch will testify on Friday

If things go according to plan for Democrats, the three witnesses will simply repeat their previous answers - only this time, with the public watching. What may be important is not what they say but how they say it. Do they look and sound credible? Are there hints of doubt in their recollections? Will they be rattled by hostile Republican questioning?

The impeachment process is rife with legal language - depositions and due process, evidence and examinations - but it is, at its heart, a political undertaking. Politicians are the prosecutors, defenders, judges and jury. And politicians, in the end, are answerable to the people who elected them.

It is the people, the voters, for whom the politicians will be performing. The goal of this week's impeachment theatre is to shape their views and win them over.

If this week is political theatre, Bill Taylor is its leading man.

His text messages, disclosed by US special envoy to Ukraine Kurt Volker, first revealed his concern about the scope of efforts by the Trump administration to pressure Ukraine to open investigations that could prove politically helpful to Mr Trump. 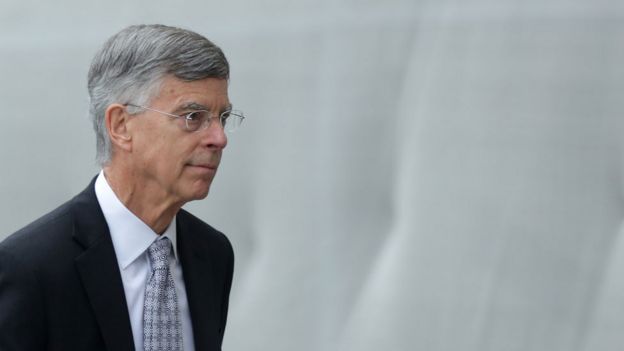 In his testimony, he expanded on his view of the White House's Ukrainian policy and detailed multiple occasions where he believed US military assistance and an invitation to the White House were being used to pressure the Ukrainian government to act.

It was his testimony that helped prompt US Ambassador to the EU Gordon Sondland - one of the president's point people on Ukrainian policy - to "refresh his recollection" and acknowledge that he did indeed tell Ukrainian officials on 1 September that US military aid likely would be withheld until they opened the requested investigations.

Taylor also recounted a video conference where a woman from the White House said the Ukrainian aid was being delayed on the president's orders.

While he will be sharing a table with senior State Department official George Kent, Democrats are counting on Taylor to clearly and compellingly explain his views and concerns in a way that the public can understand.

There is a reason Democrats chose Taylor, a 72-year-old diplomat and decorated Vietnam War veteran who served in Republican and Democratic administrations, as one of the lead witnesses in their public hearings. They think he will be up to the task.

According to a memo circulating on Capitol Hill on Tuesday, the Republican strategy for defending Mr Trump during the public impeachment hearings is straightforward.

The president did not pressure Ukraine to investigate his political rivals, they will say. While US military assistance had been withheld, it was because Mr Trump had legitimate concerns about Ukrainian corruption. And in the end, that aid was released without the investigations in question being ordered.

When witnesses contradict these assertions or criticise the president or his subordinates - as many have done in their closed-door testimony - Republicans in the hearing will dismiss them as unelected bureaucrats whose views are shaped by policy disagreements or animosity.

Republicans may also try to undermine the credibility of the anonymous whistleblower who first flagged Mr Trump's call with the Ukrainian president or argue that Mr Trump was right to ask that the Ukrainians investigate Democrat Joe Biden or his son Hunter, who served on the board of a Ukrainian energy company.

They could also ascribe any misconduct to the president's subordinates or acknowledge that while the president's actions were not ideal, they do not rise to an impeachable offense. That defence risks the ire of the man in the White House, however.

For Democrats to find success in these hearings they have to tell a cohesive story about presidential behaviour that merits impeachment and a Senate trial. Republicans simply have to poke holes in the narrative or garble it beyond recognition.

The status quo favours the Republicans. The more they can grind the investigatory gears to a halt and muddle the process, the greater the chance the entire inquiry becomes mired in partisan trench warfare.

This week will be a big test of their ability to succeed - and in Democrats' ability to deflect their attacks and press ahead.

Will Adam Schiff be up to the task?

When Speaker of the House Nancy Pelosi first announced the formal impeachment inquiry in September, she divided responsibilities between three House committees with three different chairmen.

By the time the House voted two weeks ago to set out in greater detail the specifics of the impeachment process, Pelosi had settled on one committee to take the lead and one man to run the show, California congressman Adam Schiff.

The former federal prosecutor has shepherded weeks of closed-door depositions, and now he'll be the one calling the shots as the process goes public. Unlike other recent-high profile congressional hearings, Schiff will have considerably more time than most other members of Congress to question witnesses or delegate the task to committee lawyers. 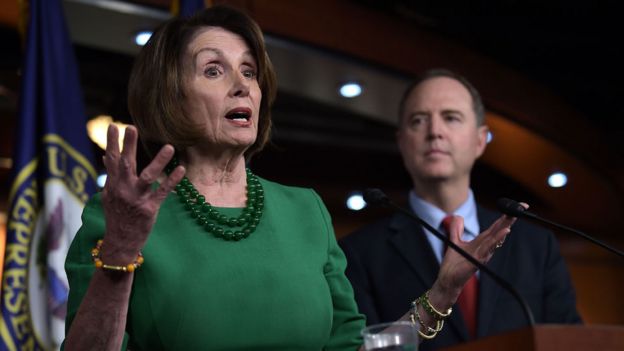 Schiff has promised a process that will be "fair to the president", but the congressman has already been a repeated target for Trump, who has berated him with personal insults and called him corrupt and his investigation a scam.

Pelosi and her fellow congressional Democrats are counting on Schiff to stay cool under pressure and present a process that is organised and professional.

The California congressman has never had a bigger moment than this.

NDC urges NO vote in Dec referendum
Previous Item
NEXT

AfDB decides not to fund Kenya coal project
Next Item