The big names who had a bad day at the hearing

A top US diplomat has told an impeachment inquiry that he followed President Donald Trump's orders to put pressure on Ukraine to investigate his Democratic rival, Joe Biden.

The inquiry is assessing if Mr Trump withheld military aid to Ukraine as a precondition. He denies any wrongdoing.

It is illegal in the US to seek foreign help to gain electoral advantage.

Mr Biden is one of the top contenders for the Democratic nomination for the 2020 presidential election.

Mr Sondland, the US ambassador to the EU, told the latest hearing in the US House of Representatives that Mr Giuliani had sought a public statement from Ukraine's leader, Volodymyr Zelensky, announcing an inquiry into "corruption issues".

Mr Giuliani specifically mentioned the company Burisma - which had the son of Democratic presidential candidate Mr Biden, Hunter, as a board member - and issues surrounding the 2016 US presidential election, he said.

If found guilty in a majority vote in the House, the Republican president will face an impeachment trial in the Senate. But two-thirds of members of that Republican-controlled chamber would then need to vote for Mr Trump to be removed from office.

What exactly did Sondland say?

In his opening statement, he said he had worked with Mr Giuliani "at the express direction of the president". While he is the US ambassador to the EU, Mr Sondland said his brief included work on Ukraine alongside other colleagues - despite that country not being an EU member.

He then confirmed the president had sought an investigation in exchange for a White House visit for Mr Zelensky - a quid pro quo (a favour in return for a favour).

"I know that members of this committee have frequently framed these complicated issues in the form of a simple question: Was there a quid pro quo? As I testified previously, with regard to the requested White House call and White House meeting, the answer is yes."

However, Mr Sondland also said he had never directly heard from the president that military aid would be released in exchange for such an inquiry.

The US diplomat said he was "adamantly opposed" to the suspension of military aid to Ukraine, and was never told why it was withheld.

But he came to believe it was linked to Ukraine announcing corruption investigations.

Mr Sondland said he had later told an aide to the Ukrainian president: "I believed that the resumption of US aid would likely not occur until Ukraine took some kind of action on the public statement that we had been discussing for many weeks."

Moreover, the ambassador insisted that this was not a secret plan, as some critics have suggested, instead arguing it was transparent and that his superiors were "fully supportive".

Who knew about the Ukraine plan?

Mr Sondland said the leaders of the state department, National Security Council and White House had been informed, including Secretary of State Mike Pompeo. He does not remember any objections from his superiors to the policy.

The ambassador said he had even discussed the fact military aid had been withheld with Vice President Mike Pence on a visit to Warsaw in September.

The chief of staff for Mr Pence has denied the vice president ever spoke to Mr Sondland "about investigating the Bidens, Burisma, or the conditional release of financial aid to Ukraine based upon potential investigations".

Similarly, a spokesman for the state department said Mr Sondland had "never told Secretary Pompeo that he believed the President was linking aid to investigations of political opponents. Any suggestion to the contrary is flat out false".

Mr Sondland, a wealthy hotelier, donated to Mr Trump's 2016 election campaign and was appointed to his position by the president in July 2018.

Mr Trump has already responded to the testimony. Brandishing a copy of Mr Sondland's opening statement on the White House South Lawn, he read out a transcript of a phone conversation the pair had, in which the president said: "I want nothing. That's what I want from Ukraine."

He also told reporters he did not know the EU ambassador "very well", but said he seemed "like a nice guy".

Mr Giuliani has also denied Mr Sondland's testimony, tweeting he had "never met him and had very few calls with him".

With his opening statement to the House impeachment hearings on Wednesday, Gordon Sondland fired a torpedo that has blown a hole in the White House's defences.

Water is rushing in, and it's now a question of whether the Trump presidency can be saved before it disappears beneath the waves.

Mr Sondland, the US ambassador to the EU, was working with Donald Trump's personal lawyer, Rudy Giuliani, on Ukrainian policy at the explicit direction of the president.

There was a quid pro quo. A White House visit for President Zelensky was conditional on opening investigations that could help the president politically. Mr Sondland also came to believe that US military aid to Ukraine was being held up for this reason.

Everyone at the White House - acting chief of staff Mick Mulvaney, Secretary of State Mike Pompeo, former National Security Adviser John Bolton and others - was "in the loop".

The word "bombshell" gets thrown around a lot these days, but Mr Sondland's testimony, which represents a shift from his earlier closed-door statements, is a watershed moment in these impeachment investigations.

Who else addressed the panel?

Ms Cooper told the lawmakers that as early as 25 July - the day President Trump had his phone call with President Zelensky - she had received expressions of concern about the aid from the Ukrainian embassy.

"The Ukrainian embassy staff asked - what is going on with Ukrainian security assistance?" She added that the embassy staff had raised similar concerns with the state department. 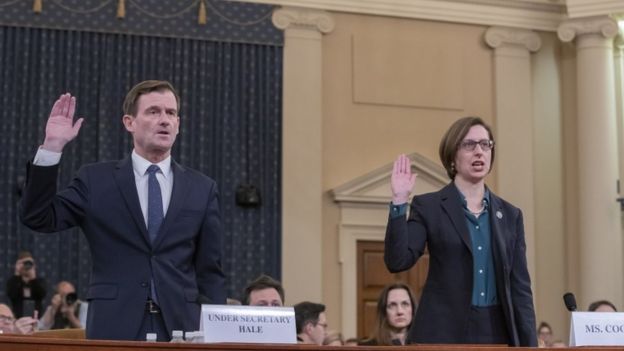 Mr Hale said that in March he had been "concerned" by a campaign of attacks in Ukraine against then-Ambassador Marie Yovanovitch and had felt she needed a statement of support from the state department.

He told the hearing he had immediately briefed Secretary of State Mike Pompeo on the issue, but Mr Pompeo "did not issue a statement at that time".

In May Ms Yovanovitch was recalled by President Trump, who called her "bad news" in his controversial phone call.

Our campaign discourse should be substantive

MCE for TNMA meets the press