Tens of thousands of people attended vigils for the nine victims of a far-right extremist who opened fire on two shisha bars in Hanau, Germany.

At the vigils on Thursday in Hanau and Berlin people carrying candles and white roses gathered in silence.

Wednesday evening's attack is being treated by investigators as an act of terrorism.

The German government is meanwhile facing calls to do more to combat the threat of far-right extremism.

All of the victims were of immigrant backgrounds, and several are thought to be of Kurdish origin.

In a statement, the Kon-Med association of Kurds in Germany said that it was "furious" with the authorities for "not resolutely opposing right-wing networks and right-wing terrorism".

Has Germany done enough to tackle far-right violence?
'A shock but not a surprise' - German Kurds react
What we know so far

Germany's Muslim association KRM also called for more to be done, saying they had requested for months there needed to be "a clear stand against Islamophobia".

In her response to the attack Chancellor Angela Merkel talked of the "poison of racism", while attending one of the vigils President Frank-Walter Steinmeier said Germany "won't be intimidated".
What happened in the attacks?

The shootings began around 22:00 (21:00 GMT) on Wednesday, and the first target was the Midnight shisha bar in the city centre of Hanau.

The suspect then travelled by car to the Kesselstadt neighbourhood, some 2.5km (1.5 miles) away, and opened fire at the Arena Bar & Cafe.

Shisha bars are places where people gather to smoke a pipe known as shisha or hookah. Traditionally found in Middle Eastern and Asian countries, they are also popular in many other parts of the world.

The shootings sparked a manhunt. Police identified the gunman through information from witnesses and surveillance cameras. Early on Thursday, they stormed the suspect's home, near the scene of the second shooting.

The suspect and his 72-year-old mother were found in his apartment, both also shot. A gun was found next to the suspect's body.

The investigation into the attack is now focusing on whether others knew about or helped organise it, Mr Frank said on Thursday, adding that investigators wanted to establish any links the suspect may have had in Germany or potentially also abroad.
Who were the victims?

Few details have been released but they include German citizens and foreigners aged between 21 and 44, Germany's federal prosecutor said.

A Bosnian, Bulgarian and Romanian citizen died in the attack, their respective countries said.

Ali Can, a German-Turkish anti-racism activist, posted a photo of a friend of his cousin, saying that the friend was among those killed.

Writing on Twitter he said: "We can't spend a peaceful evening out, we're scared for our lives. What is happening in Germany? Where is the protection?"
Skip Twitter post by @alicanglobal

What do we know about the suspect?

Tobias R had posted videos and a kind of manifesto on his website, the federal prosecutor said.

In the document he wrote that people from more than 20 countries including Turkey and Israel should be "destroyed", AFP reported.

London-based German counter-terrorism expert Peter Neumann said the text contained "various, but mostly extreme right views, with a do-it-yourself ideology cobbled together out of parts found on the internet". 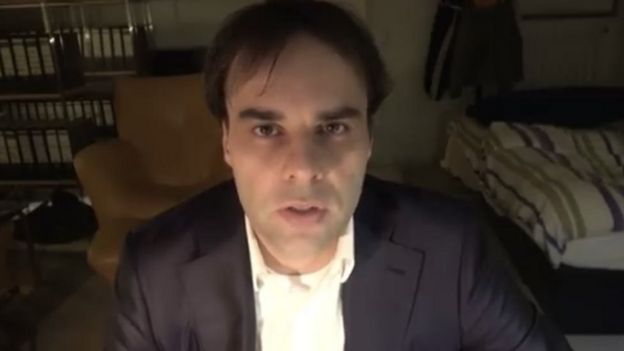 Image caption The suspect has been identified as Tobias R

Hesse state Interior Minister Peter Beuth said the suspect had not previously been known to the authorities.

The Bild tabloid reports he had a firearms licence, and that ammunition and gun magazines were found in his car.

Gun laws in Germany are among the most stringent in the world, and were tightened further in recent years after other mass shootings.
Recent far-right attacks in Germany

October 2019: In Halle, an attacker kills two and tries to storm a synagogue, broadcasting the assault live online. He later admits a far-right, anti-Semitic motive for the attack

June 2019: Walter Lübcke, a pro-migrant politician, is shot in the head at close range and found dead in his garden. A suspect with far-right links later confesses to the murder

July 2016: An 18-year-old shoots dead nine people at a shopping mall in Munich before killing himself. Bavarian authorities later classify the attack as "politically motivated", saying the teen had "radical right-wing and racist views" 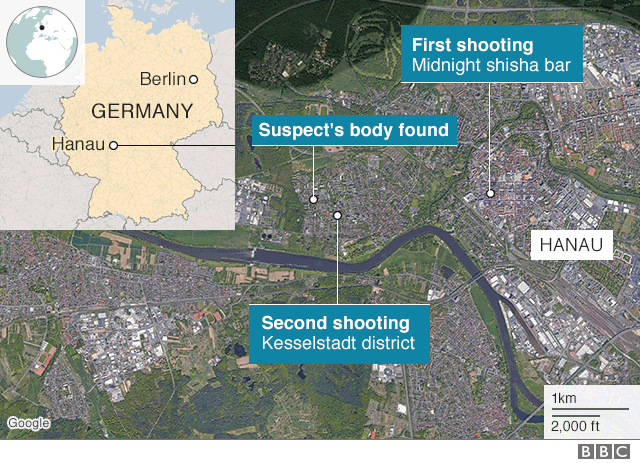