Coronavirus capital by capital: How are Europeans coping with shutdown?

Across the Continent, Europeans are facing a barrage of restrictions on their freedoms as the authorities struggle to stop the new coronavirus spreading further. BBC correspondents describe the challenges faced in the cities where they live.

Spaniards do their best amid worsening crisis

Fear and uncertainty have encouraged residents to largely comply with a national lockdown which means they are not allowed out without a justifiable reason.

Madrid is at the heart of Spain's pandemic. With about half of the country's deaths, it has seen hotels and a massive conference centre converted into makeshift hospitals and an ice rink turned into a morgue.

A few shoppers go in and out of supermarkets and stay 1m (3ft) apart at the checkout. At pharmacies only one or two customers are allowed inside at a time, so queues of masked people snake out onto the street. 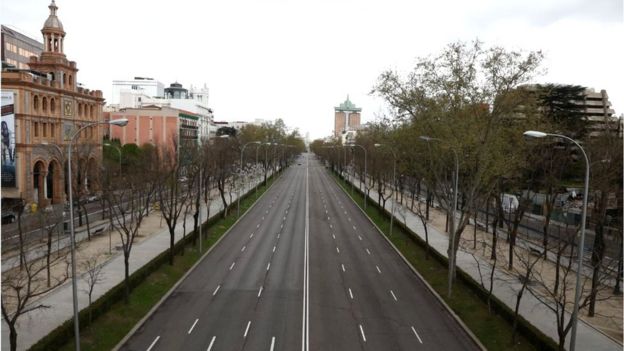 Police enforce the restrictions and thousands of people have been fined. But the response has mostly been positive and the hashtag #QuedateEnCasa (stay at home) has caught the imagination. A wealth of specially created online activities has emerged to make the confinement more bearable for both parents and kids.

Grandparents play a huge role in childcare in Spain and there is widespread sympathy that they cannot be with their grandchildren.

At eight o'clock every night, Spaniards applaud the healthcare workers who are battling the virus.

I peer out of my window to see how long the queue is for the supermarket next door. If it's more than 10 people, that could mean a half-hour wait to be let in one by one. As it happens, it's shorter, so I nip down.

It's calm and orderly. People chat while waiting, sharing surreal experiences. There's no hoarding or panic buying. The toilet roll shelves have a few gaps but everything is still available. 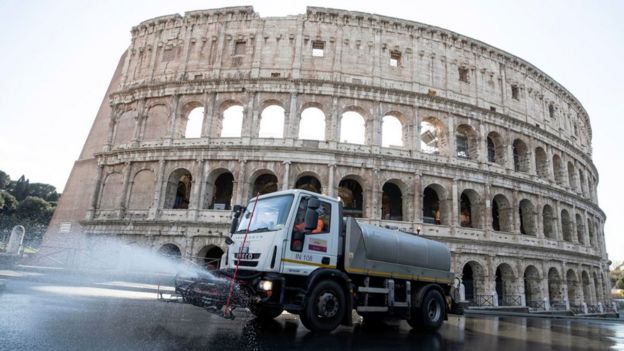 The streets of Rome are regularly disinfected

Outside, trams and buses still run - but they're almost empty. Rome's cobbled streets are pretty deserted. Movement is restricted to urgent medical or professional need. Police make spot checks on papers to justify why people are out. I was stopped on a run and told I could only exercise within 300m of my home. It's reminiscent of wartime curfews.

Tourist sites are silent. In some ways, it's a privilege to see the beauties of Rome so quiet - if it weren't for the catastrophic circumstances that have made them so.

As the eye of this storm moves across eastern France, there's a sense of officials racing to catch up with the wave: an emergency scramble for intensive-care beds and face masks for medical staff; a tightening of social restrictions seen as the main barrier to catastrophe.

A hundred thousand police officers have been deployed to enforce the rules and there's a six-month jail sentence for those who repeatedly fail to comply.

A friend told me how a neighbour of hers was fined for sitting alongside her husband in their car. My camera crew and I were stopped near the BBC office - the rules had changed and we now needed permission to be out filming. 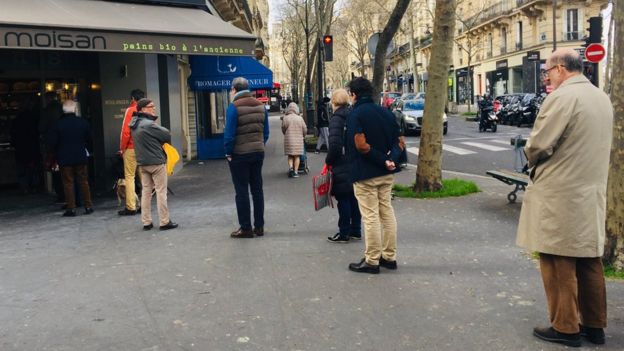 With each tightening of the quarantine, the pressure ratchets up another notch. And yet, there's also something else that reveals itself in the small daily spaces of life under lockdown.

My husband and I regularly confront the question of who should take out the rubbish, but now I find myself quietly sizing up an opportunity of a few seconds out. A mundane chore, morphed into a rare treat.

The queue for my local supermarket now snakes around the block each day. And yet, I've had more conversations there, met more people, felt the collective spirit more than ever before.

"I've got a whole pallet of toilet paper if you want it!" chuckled the delivery man as I walked past my little local supermarket. It's been impossible to find, and pasta and flour shelves are always empty, too. Berliners must be doing a lot of home baking.

They're certainly doing a lot of jogging. The terms of Germany's lockdown differ slightly from state to state, but all allow for the national obsession with fresh air. People can leave their homes - as long as they're with members of their own household. 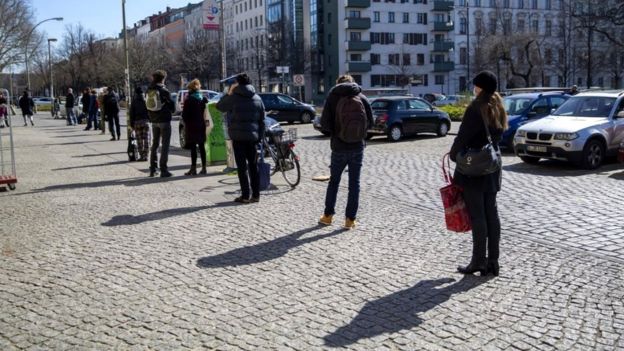 You can meet up with one other person to take the air, exercise or chat - strictly 1.5m apart of course. In this city of apartment dwellings, that matters.

The number of infections is rising. Many of those tested so far have been young and fit, some having returned from skiing holidays in Austria and Italy. Virologists speculate that this may be the reason for the relatively low number of deaths. But they warn, bleakly, that it will rise.

Schiphol airport near Amsterdam was eerily quiet when I returned there from Scotland with my three-year-old, just as the crisis began to affect every aspect of life.

While we were away, a parent at my daughter's nursery in The Hague tested positive for coronavirus, so I kept my daughter with me, working from home. 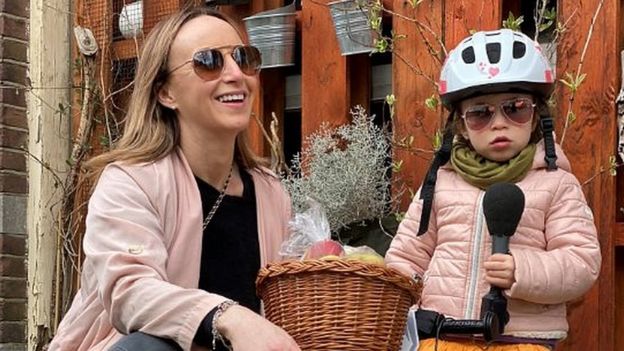 How do you keep your distance in one of the world's smallest and most densely populated countries?

It's a challenge 17.2 million people in the Netherlands have been told to embrace as the government pursues a "group (or herd) immunity" strategy - cocooning the most vulnerable while trying to control the spread of the virus.

The trams are largely empty, cannabis cafes are only doing takeaways, and now the council has told people not to visit the woods or the sand dunes. There will be no swimming, ballet, play dates or trips to the park for my daughter.

Anger and generosity in Hungary's capital

The mood in this city of rebels and coffee shops is downbeat. Cafes are closed, and people queue a metre apart in swirling snow outside post offices, bakeries and pharmacies. 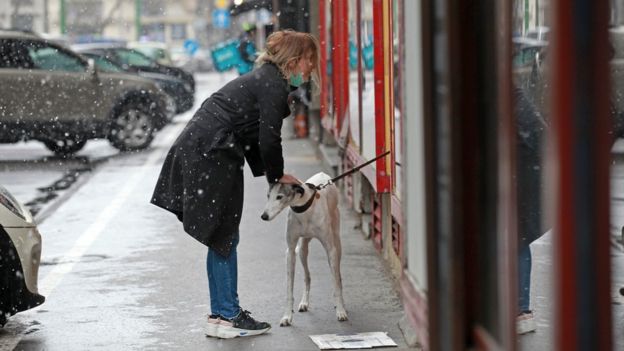 As wintry conditions returned to Budapest, the government sought unlimited powers to tackle the crisis

"My children think I'm at home, but in fact I'm going shopping," an elderly lady confided to her friend on the 27 bus.

"They ordered me to stay at home, but I don't like the food they bring me."

The Budapest Bike Maffia, a civic group on wheels, has launched a Vitamin Boom campaign, distributing hot food and vitamins to homeless shelters.

The spread of the pandemic has prompted a diplomatic row between Slovenia and Serbia over the plight of more than 100 Serbian citizens.

They work in Slovenia, but remain Serbian residents. And when Serbia closed its borders last Friday, they remained stranded - some sleeping in their cars. 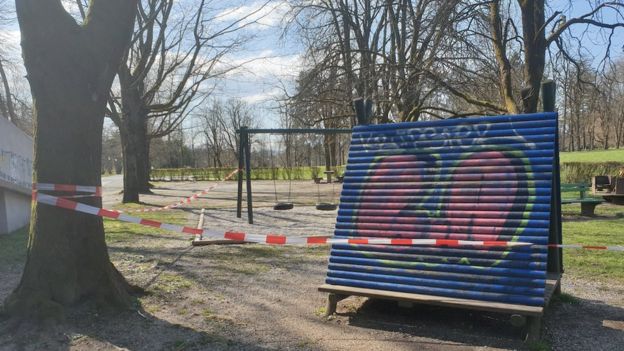 This park in Ljubljana has been left deserted by the lockdown

Despite the tiff, both countries are facing a similar challenge. Slovenians only have to look across the border to Italy to see how serious this pandemic can become; Serbians are all too aware of the limitations of their health service.

Slovenians normally throw themselves into activities like skiing, snowshoeing and ice-climbing. But winter sports have been cancelled and the streets of Ljubljana are so quiet that birdsong is often the loudest noise.

In Serbia, flouting self-isolation and quarantine orders has led to increasingly restrictive curfews.

Most Austrians are self-isolating at the moment after strict controls were imposed by the government in mid-March. They are only allowed to leave home for essential work, to buy food or to help others.

But I can't leave the house at all. 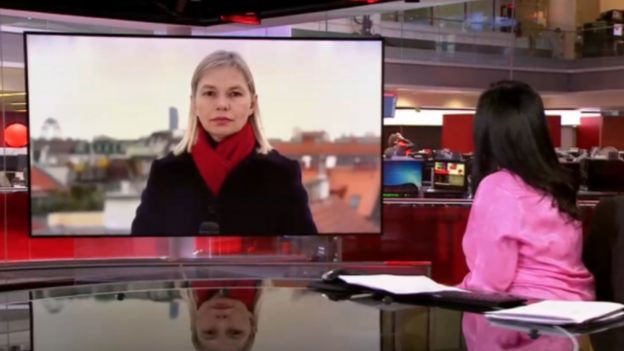 I have recently returned from working in Italy and have to stay in for two weeks.

I tried to get a delivery of supplies, but all deliveries are booked up for several weeks, so I am reliant on kind friends to bring food to me.

The streets are uncharacteristically quiet. I have become intensely aware of church bells ringing out on the hour all day long.

And every evening, a saxophonist plays Moon River and Summertime from his window.

Is Sweden ready for social distancing?

The view from my top-floor apartment in southern Stockholm has barely changed since the start of the crisis. Toddlers bundle up in warm jackets in the playground; commuters wait at the bus stop for reduced services; my local pizzeria remains popular with eat-in customers. 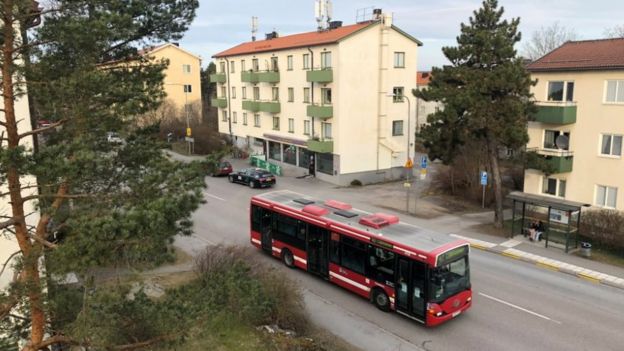 Buses run but there are fewer of them in Stockholm

Sweden's coronavirus death toll is lower than many of its European neighbours, and the authorities have made it clear they want to slow down the virus in a calm and controlled way. Large events are banned and schools for over-16s and universities are closed.

Swedes have been advised to work from home, avoid non-essential travel and stop visiting elderly relatives. Restaurants and bars have been told to offer table service (or take-out), to stop people lingering over counters.

I have friends who've been voluntarily self-isolating for a week despite showing no symptoms, while others have caught the train up to ski resorts.

More than half of Stockholmers live alone, but even the most introverted of my acquaintances are already fearful of increased loneliness should the government impose stricter rules.

People here may joke that social isolation isn't a problem, as that's how Finns live anyway.

But not enough of them are actually doing it, judging by the crowded running track at Toolonlahti Bay at the weekend. 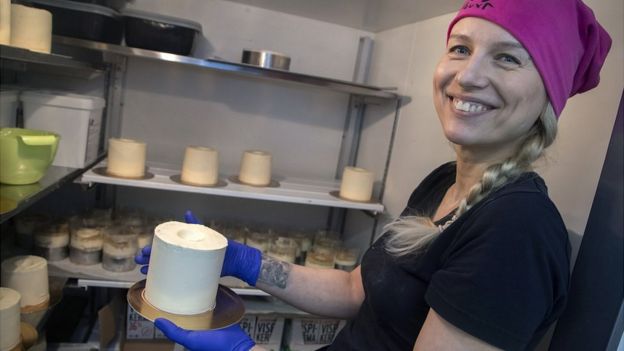 Finns were first told to self-isolate as much as possible. Schools, cultural and sporting facilities were shut, and entry in and out of Finland was restricted.

But so many people travelled north to ski resorts in Lapland that the slopes were closed.

Now the government has gone further, in effect sealing off the southern region of Uusimaa, home to a third of Finland's population and the capital Helsinki.

Most of Finland's coronavirus cases are here and social isolation has suddenly become more serious.

WHO urges Africa to scale up response
Next Item