The current coronavirus outbreak is the biggest challenge for the world since World War Two, UN Secretary General António Guterres has warned.

He said it could bring a recession "that probably has no parallel in the recent past".

His warning comes amid dire predictions about the possible economic impact of measures imposed to fight the virus.

The death toll in the US is now more than 4,000 - higher than the declared number of fatalities in China, where the outbreak began late last year.

Johns Hopkins University said 865 people had died in the past 24 hours in the US and in all more than 189,000 people in the country had been infected.

About three out of four Americans are now, or about to be, under some form of lockdown, as more US states tighten measures to fight the coronavirus, which causes the Covid-19 disease.

Meanwhile, Spain, second only to Italy in the number of recorded fatalities, has seen 849 deaths in the last 24 hours - the highest number it has had in a single day.

What did Mr Guterres say?

Speaking at the UN headquarters in New York at the launch of a report on the potential socioeconomic impact of the outbreak, Mr Guterres said: "The new coronavirus disease is attacking societies at their core, claiming lives and people's livelihoods". 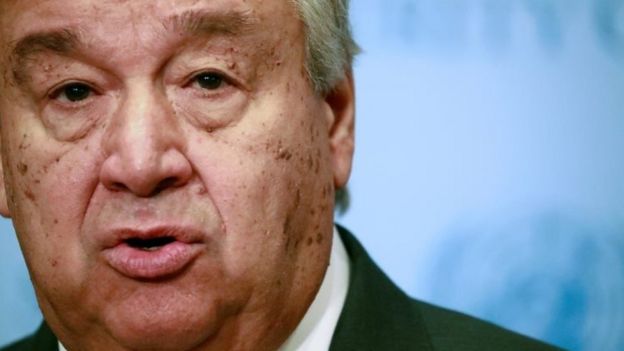 António Guterres: "What the world needs now is solidarity."

Countries around the world have imposed a series of measures, including restricting people's movements and closing most businesses, to curb the spread of the virus.

The UN report estimates that up to 25 million jobs could be lost around the world as the result of the outbreak. It also projects an up to 40% "downward pressure" on global foreign direct investment flows.

"Covid-19 is the greatest test that we have faced together since the formation of the United Nations," he said, calling for "an immediate co-ordinated health response to suppress transmission and end the pandemic".

Mr Guterres urged the industrialised nations to help those less developed, or potentially "face the nightmare of the disease spreading like wildfire".

On Tuesday, the World Bank warned that "significant economic pain" seemed "unavoidable in all countries", and households that depend on industries particularly vulnerable to the impact of the virus were at "higher risk".

Meanwhile, US President Donald Trump told Americans to prepare themselves for "a very, very painful two weeks", as modelling by the White House's coronavirus task force estimated that at least 100,000 could die in the coming months.

Infectious diseases adviser Anthony Fauci said that "as sobering a number as that is, we should be prepared for it", while stressing that authorities were doing their utmost to prevent it.

Grim death toll projections in US

President Donald Trump had already announced the need to significantly extend social distancing guidelines beyond the two weeks just completed, saying people would need to stay at home as much as they possibly could for another month.

At Tuesday's White House briefing he turned the microphone over to his medical experts to help him persuade Americans to comply.

They explained that the aim was to bring down the number of new cases in the hotspots, especially New York, and prevent runaway outbreaks in other states.

Infectious disease expert Dr Anthony Fauci said steps taken so far had already begun to have an effect, and now was not the time to take the foot off the accelerator.

But even with strict measures the White House is projecting that between 100,000 and 240,000 Americans will die of the coronavirus pandemic.

New York will be the first to feel the brunt of that. It's focused on preparing enough beds and getting enough medical equipment for when the number of cases reaches its peak - in about two weeks' time.

What are the latest developments around the world?

Close your ranks for devt of Asokwa — MCE