Coronavirus: Three out of four Americans under some form of lockdown

About three out of four Americans are now, or about to be, under some form of lockdown, as more states tighten measures to fight the coronavirus.

Maryland, Virginia, Arizona and Tennessee became the latest states to order citizens to stay at home, meaning 32 of 50 states have taken such steps.

Meanwhile governors are quarrelling with President Donald Trump about the availability of testing kits.

The US now has more Covid-19 fatalities than China, where the illness was first reported. 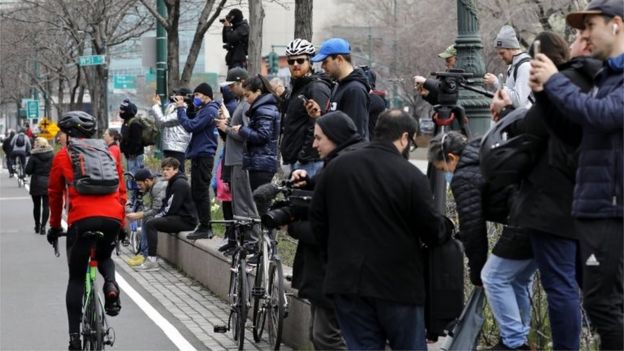 New York City is the worst-hit place in America, with 914 confirmed fatalities, according to Johns Hopkins University.

How many Americans are affected by lockdown?

Some 245 million people are already under orders to stay at home, or facing such orders which come into effect later on Tuesday.

Almost two-thirds of states have issued directives for their citizens to stay put, while the remaining states have localised orders in effect.

In Florida, Governor Ron DeSantis, who has been reluctant to impose a state-wide order, said he would instruct people in four counties in the south - where more than half the state's cases of the virus exist - to stay at home. He said this would last until at least the middle of May.

In general, the "lockdowns" allow people to only go out to get essential supplies and medicines, or limited forms of exercise.

The economic consequences have been profound, with millions of people having lost their jobs.

According to an estimate of the Federal Reserve, the US central bank, 47 million people could be out of work in the coming months, with the US still weeks away from the peak of infections.

What are governors and the presidents disagreeing about?

According to CBS News, President Trump and state governors held a conference call on Monday in which Mr Trump suggested there was no longer a lack of kits to test people for Covid-19.

In an audio recording obtained by the US network, Mr Trump says he has not "heard about testing in weeks.

"We've tested more now than any nation in the world. We've got these great tests and we're coming out with a faster one this week... I haven't heard about testing being a problem," he says.

However, Montana Governor Steve Bullock is heard to say his state does not have adequate numbers of kits.

"Literally, we are one day away, if we don't get test kits from the CDC [Centers for Disease Control and Prevention], that we wouldn't be able to do testing in Montana," he says.

"It would be shocking to me that if anyone who has had access to any newspaper, radio, social networks, or any other communication would not be knowledgeable about the need for test kits.

"I can be assured that the White House knows very well about this desperate need for test kits," the newspaper quotes him as saying.

Earlier, the president said the US would be in "a very good shape" in terms of the number of ventilators available by the time the coronavirus outbreak peaks.

The president said at least 10 US companies were now making the medical devices, and some might be exported.

The virus can cause severe respiratory issues as it attacks the lungs, and ventilators help keep patients breathing. Several state and local officials have warned hospitals are at risk of running out of equipment.

Mr Trump has alleged some state governors were "hoarding" critical medical equipment, and that items including face masks were being stolen from hospitals. He has not presented any evidence for either claim.

Ethiopia postpones polls due of COVID19
Next Item