Mario Balotelli: From falling out with Nice to leading Marseille resurgence

Mario Balotelli has made a positive start with Marseille

Instagram celebrations, fitness issues, falling out with Patrick Vieira, and scoring goals. Mario Balotelli's time on the south coast of France has been predictably eventful. James Walker-Roberts looks at his decline at Nice and recent resurgence with rivals Marseille...

After ending a two-and-a-half-year spell (two good years, six not-so-good months) with Nice in January to join Mediterranean rivals Marseille, he declared afterwards that "Marseille is on another level, another type of football and atmosphere...I thank Nice and its supporters, but there's no comparison with Marseille".

Five goals in eight games - including a winner against Nice in the derby - have endeared Balotelli further to Marseille fans, as have his creative celebrations.

After scoring a goal against St Etienne he filmed the celebrations on his phone and uploaded them to his Instagram Story, while his derby goal was followed by a game of rock, paper, scissors with Florian Thauvin. There were even reports that if he scored in Le Classique against Paris Saint-Germain on Sunday he was going to unveil a t-shirt with Marcus Rashford's face (after Manchester United beat PSG in the Champions League), although Balotelli said this was not true.

Nevertheless, Balotelli seems to be enjoying his resurgence. Which can't be said for everyone.

Balotelli celebrated against former club Nice by having a game of rock, paper, scissors with Florian Thauvin

Nice head coach Patrick Vieira described Balotelli as "rather non-existent" in the derby while Nice defender Malang Sarr criticised his former team-mate for his conduct during the first half of the season.

Would Sarr count him as a friend? "He is a former team-mate, that is it. He knows very well that his behaviour was not appreciated by everyone. He wasted six months." 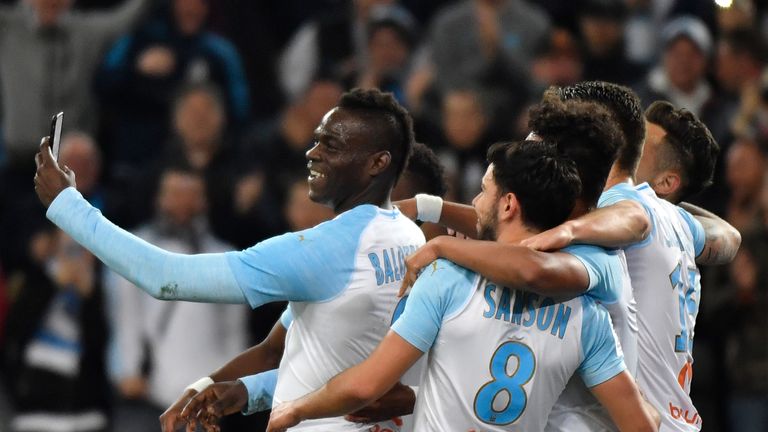 Balotelli celebrates a goal with team-mates

It wasn't always like this for Balotelli in Nice, where things actually started off quite…nicely.

After joining from Liverpool in 2016, Balotelli scored 15 goals in 23 Ligue 1 appearances in 2016/17, helping Nice finish third and secure a Champions League place. He signed a new one-year deal in the summer and was commended by the club for not pushing for more money.

"The Italian international has made considerable financial efforts to continue the Nice adventure, as he always intended during this off-season, favouring the sporting aspect and the choice of his heart," said Nice.

Balotelli's strong form continued in 2017/18 as he scored a career-high 18 league goals - from 26 starts - and netted seven more in Europe. In May 2018 he was recalled to the Italy squad for the first time since 2014 by his former Manchester City and Inter Milan boss Roberto Mancini. 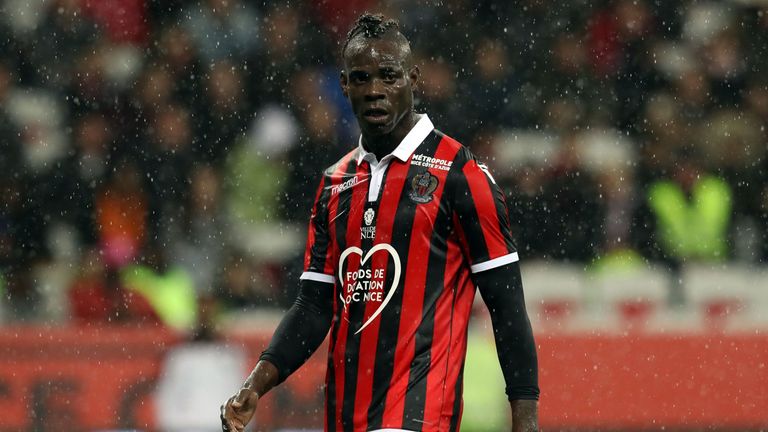 But Balotelli's relationship with Nice started to sour in the summer.

Vieira had been appointed as the club's new head coach to replace Lucien Favre, and the former Arsenal midfielder was surprised not to see Balotelli at the first day of pre-season training.

When he did turn up to training two weeks later, Balotelli was "not in great shape", according to French newspaper L'Equipe. He was said to be 12kg over his ideal weight.

A club source told L'Equipe that Balotelli was a bit bulky because he was "negotiating his transfer to Marseille at the time…and he knew he was suspended for the first three games of Ligue 1 so he wasn't in good shape."

Marseille were strongly linked with a move to Balotelli, and it seemed that his future would be away from Nice when Vieira said on August 12 that "the player wants to leave, so it's unlikely he'll remain here…the club will try to do whatever is possible to help him leave".

But the transfer did not materialise and Nice released a statement on August 20 to say that Balotelli had decided to stay for a third season.

Nice president Jean-Pierre Rivere told L'Equipe that Marseille "missed out on him for 1.5 million euros" while adding the forward was now "100 per cent" with the team and was not forced to stay.

"Made a little complicated at the start of the summer by another club from the south of France, the situation is back to normal," added Nice in their statement.

Balotelli returned from his three-game ban to start in Nice's first win of the season - a 1-0 victory at Lyon.

Vieira said afterwards he "still has a lot of work to do" in terms of fitness, and Balotelli was under the spotlight again a few weeks later when he was called up by Italy for UEFA Nations League games against Poland and Portugal.

He started against Poland but was criticised for his display. 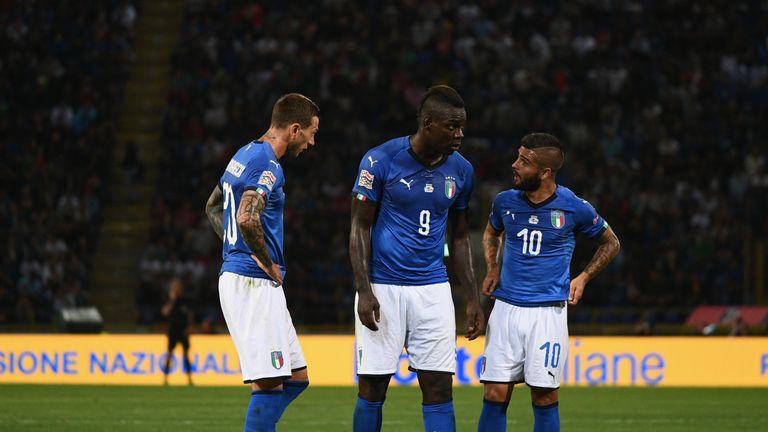 Former Italy boss Arrigo Sacchi said Balotelli "wanders around by himself and doesn't even attempt to stick to the plan". Zbigniew Boniek, head of the Polish Football Association, was even more damning in his criticism.

"I wouldn't send on a player who's 15kg overweight," said the former Juventus and Roma player.

"I didn't see him prepared to make certain efforts at certain levels. It's his fault because a professional can't present himself in these conditions. To say that Balotelli worked for the team is an outright lie. To be a great player, you have to always be fit. Balotelli is useless in this condition."

It wasn't just Balotelli's fitness that was an issue at Nice.

Balotelli and Vieira were team-mates at Inter Milan and Manchester City, but their player-coach relationship appeared strained from the start. 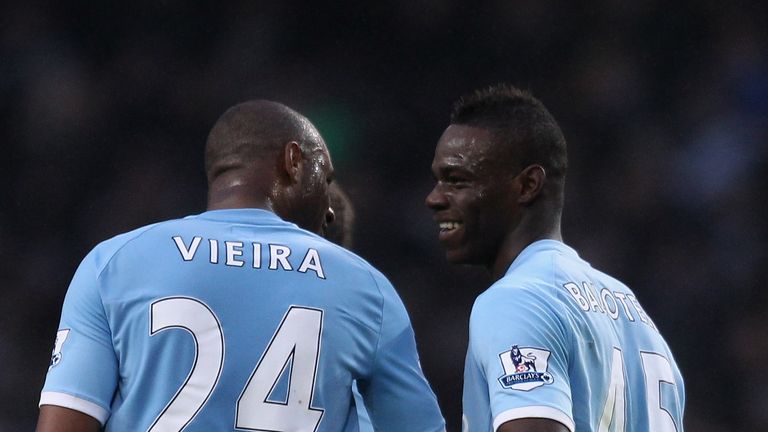 Balotelli and Patrick Vieira were team-mates at Manchester City

Their interactions were made public by a documentary called "Mister Vieira", which followed Vieira for his first few months at Nice.

Some of the revelations include Balotelli saying Nice's system doesn't suit him, the striker flipping over a tactics board in frustration and leaving a post-game briefing to go to the toilet, which Vieira calls a "lack of respect".

The situation might have been improved if Balotelli was scoring, but he didn't find the net in 10 Ligue 1 appearances. Vieira even admitted in a surprisingly candid interview with L'Equipe that his patience was being tested.

"When it comes to Mario, I want to answer back, or just slam him up against the wall or leave him hanging by his collar on the coat rack, but I can't, as I'm no longer a player," he said.

"I have to think twice before I say anything, because it can have an impact and I risk losing a great player. I don't want to say something I'll regret. I am trying to be constructive in my comments to him."

Perhaps Vieira's patience finally snapped when, at the start of January, he told Balotelli to stay away from training and consider his future. The forward had three weeks out of action before sealing his move to Marseille.

"Finally it's happened. I'm here and I can start playing," said Balotelli, who revealed he had been training alone to stay in shape. 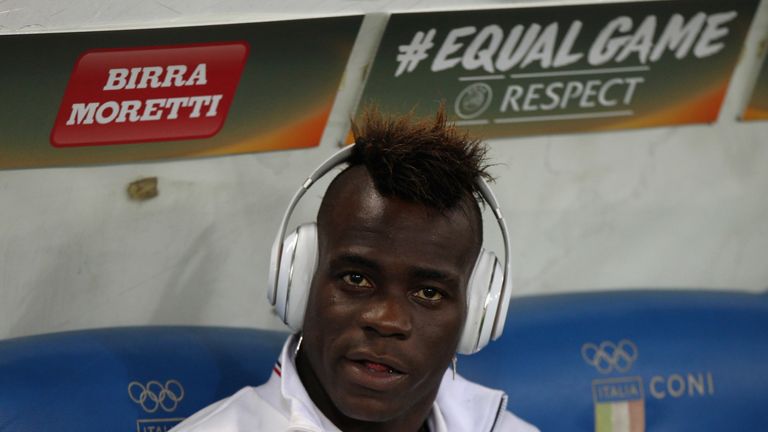 Will Balotelli get another Italy call-up?

Before Balotelli's arrival their top scorer in Ligue 1 had been former Newcastle winger Florian Thauvin with 11 goals. Strikers Valere Germain and Kostas Mitroglou had netted six goals between them.

Marseille had also slipped down to seventh position in Ligue 1 after one win in their last 11 games.

Fast-forward two months and Marseille are fourth, six points behind Lyon in the final Champions League qualification place. They've only lost two games that Balotelli has started and have won five of their last seven matches.

His form has not earned him an Italy recall for the upcoming European Qualifiers against Finland and Liechtenstein, but he has quickly won over the Marseille fans and others around the club.

Marseille boss Rudi Garcia has described him as "wise" and "well-balanced" while former Marseille player Jose Anigo said he reminds him "of (Didier) Drogba in the way he embodies OM's attack".

Former Nice team-mate Christophe Herelle has not enjoyed Balotelli's revival as much. After the defeat to Marseille he said: "He did not score a goal in six months and I saw him running like never before. At one point, you have to respect the club, the people and the fans."

Giggs: Euros to define me as Wales boss
Previous Item
NEXT