Denmark's Jakob Fuglsang claimed the biggest win of his career with a solo victory in the Liege-Bastogne-Liege one-day classic in Belgium.

The Astana rider dropped his rivals on the last climb with 13km to go and stayed away, despite nearly crashing on a wet descent in the final 5km.

"That slide was a scary moment," said Fuglsang, 34.

"But it gave me a bit of adrenaline for the last part. It's an amazing feeling."

It is the first 'monument' victory of Fuglsang's career. The five monuments are cycling's oldest and most prestigious one-day races, with Il Lombardia the only one remaining this season on 12 October.

Fuglsang finished on the podium in all three of this year's Ardennes Classics, having also taken third at Amstel Gold Race on 21 April and second at Fleche Wallonne on Wednesday.

Britain's Lizzie Deignan finished seventh in a group four seconds further back, having made her return to cycling following the birth of her first child at the start of the Ardennes campaign earlier this month.

After being caught out by a stunning late surge by Mathieu van der Poel at Amstel Gold and outmuscled by Julian Alaphilippe at Fleche Wallonne, Fuglsang won the biggest race of the three Ardennes classics with a superbly-timed attack.

With the race having all come back together on the final climb of the Cote de la Roche-aux-Faucons, the Dane kicked and was joined by Canada's Michael Woods, who finished second last year, and Formolo.

Fuglsang shed Woods and then Formolo as he drove on, reaching the summit alone and building up an advantage of 20 seconds, only to nearly fall.

Taking a tight inside line round a corner, Fuglsang's back wheel slid out but he showed superb bike-handling skills to keep himself upright before powering on to the finish of the 256km race.

Dutchman Wout Poels was the highest-placed Team Sky rider in 10th in the British outfit's final race under Sky sponsorship before becoming Team Ineos at the Tour de Romandie from Tuesday. 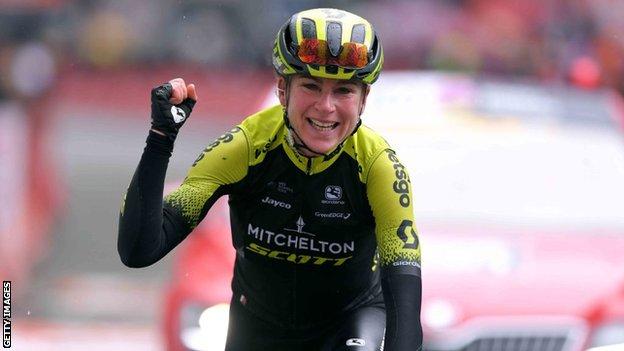 The race ran 138.5km from Bastogne to Liege, despite the name, with Van Vleuten making her decisive move on the penultimate climb of the Cote de la Redoute at 32km to go.

The world time trial champion took the summit with a 25-second advantage and continued to add to her lead all the way to the line, while Mackaij made a surprise late attack to take second.

It was also a third straight podium for Van Vleuten in the Ardennes classics, having finished second at Amstel Gold and Fleche Wallonne as she continues to have an impressive season after recovering from a severe knee injury sustained at the 2018 World Championships.

"This was really high on my list and to finish off my spring with another win and three second places after my knee injury, I'm super happy," she said.