Derek McInnes says his players will not be distracted by Lapland's midnight sun in their Europa League first qualifying round second leg with RoPS.

The concession of a late away goal in Aberdeen rewrote the script for the match in Arctic Finland, where darkness does not fall in the summer months.

But the Scottish Premiership side are 2-1 ahead and manager McInnes is not concerned by the unusual conditions.

"I actually had half an hour's sleep this afternoon," he said.

"We've got blackout curtains, the players will have eye masks, all these things have been taken care of. The players will get enough rest because we're being professional in our preparation for the game."

An 89th-minute winner in Georgia means Chikhura Sachkhere lie in wait in the second qualifying round after a 2-1 win over Fola Esch secured a 4-2 aggregate victory over the visitors from Luxembourg.

Tommi Jantti's late strike at Pittodrie has certainly made McInnes' task that bit more challenging given it looked for long spells in the first leg that his team would ease their way through.

But 33 shots gleaned just two goals because of a combination of profligacy and an inspired performance from former Ross County and Inverness Caledonian Thistle goalkeeper Antonio Reguero.

"Anyone will tell you, at this stage of the season, the last bit of polish in that final third is the bit that you search for and it takes a wee bit more game-time for those boys to be at their sharpest," McInnes said.

"There were moments of quality within the game, none more so than our two goals, and I think we'll be better for having another week's training and having that 90 minutes because you can't replicate that."

McInnes added his voice to those frustrated that all Scottish teams must now come through four rounds of qualifying before the reality of group-stage football but admits that his players relish the chance to test themselves against unfamiliar opposition.

"It tests you tactically and, as a staff and as a club, we're really busy and I like that part of it," he said.

"I think for the supporters it's very enjoyable and I'm sure the players are stimulated about it as well and they see the importance of qualifying for Europe.

"We can't be 100% at this stage of the season, but we can be good enough to come through the tie and that's what we're planning on doing."

McInnes confirmed he will be without Craig Bryson, the summer midfield signing from Derby County, and defender Michael Devlin, who picked up a hamstring injury in training.

Left-back Greg Leigh could have to wait for his debut since arriving from Breda after sitting out the squad's session on Wednesday evening despite travelling.

RoPS coach Pasi Tuutti admitted there was a gap in quality between his side and Aberdeen but believes the late goal at Pittodrie has blown the tie wide open.

"Overall, we have to be proud of the players," he said. "After the initial tension that didn't last long, we did well and the goal was a prime example of what can happen if we can break through the middle." 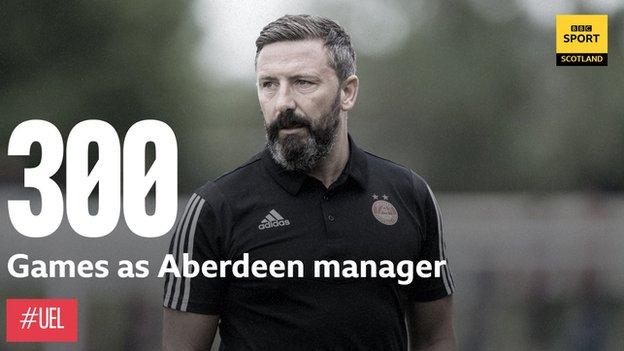 Avoid hooliganism ahead of Hearts,Kotoko

Salisbury sees off Evans in doubles