George Ford will start at fly-half and Owen Farrell at inside centre as England begin their World Cup campaign against Tonga.

Coach Eddie Jones has also picked the youthful combination of Tom Curry at blind-side and Sam Underhill at open-side for Sunday's game in Sapparo.

Farrell will captain the side as scrum-half Ben Youngs wins his 90th cap, with Manu Tuilagi at outside-centre.

Jones said: "There's no doubt Tonga will want to come through the front door, and we want to play a little bit out the back door against them.

"One of the things we've used the warm-up games for is to develop an adaptable squad that allows us to have more adaptable tactics, and this one of the options we can use."

Anthony Watson starts on the right wing with Jonny May on the left and Elliot Daly at full-back.

During this year's Six Nations, Jones preferred Farrell at 10 with Tuilagi and Henry Slade in midfield, but Ford and Farrell were in harness during England's record-breaking win over Ireland in their pre-tournament warm-up game.

"We just feel it's the best way to play against Tonga - it gives us a number of options in terms of running and kicking and passing," Jones added.

"We know Tonga are going to be ferocious and full of pride and passion.

"They are a side that if they get a bit of momentum can be very dangerous, and we will need to be on our best on Sunday."

Jones has referred to 21-year-old Curry and 23-year-old Underhill as his "kamikaze kids", their selection reminiscent of the David Pocock/Michael Hooper back-row combination which served Australia so well at the last World Cup.

He said: "They've both been training really well, and we're excited about the prospect of them playing together.

"We just feel, particularly with the way the breakdown's being refereed at the moment, allowing more contests, that having two guys who are very adept at poaching gives us the best opportunity in this game."

This is close to Jones' first-choice team but it is also an inexperienced one in some areas, the second youngest in terms of average age that England have ever fielded at a World Cup. 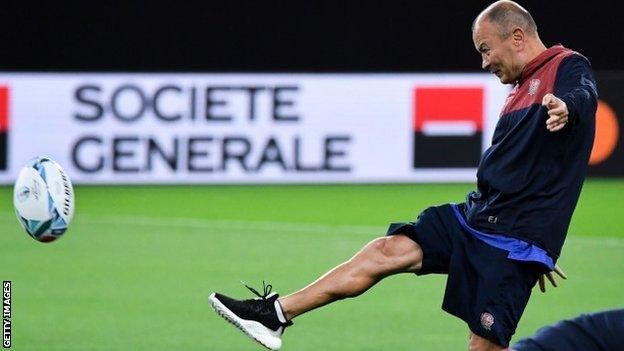 Eddie Jones became England coach immediately after the 2015 World Cup, when they were eliminated at the group stage

But Jones is content with what he has at his disposal, after four years in charge that have brought both a Grand Slam title and a fifth-place finish in the 2018 Six Nations.

"All that accumulated experience probably counts more than caps.

"I feel like I'm at the top of a rollercoaster. You're excited but you're also nervous, because you're not sure how you're going to handle it.

"I think that's a really nice way to be, and if you ask any coach or player at this time, they'd have the same mixture of feelings.

"You know that in England it won't just be rugby fans that'll be watching these games. It becomes a family event. The responsibility of making sure your country plays with pride and passion is very important."

Farrell was part of the England team that went out at the group stage of the last World Cup, his first experience of the tournament coming as a teenager when he travelled to France to watch his father Andy as that England team made it all the way to the 2007 final.

"There are some good relationships in this squad, and we've worked hard on making sure we're a tight-knit group, not just on the pitch but off it, and hopefully that stands us in good stead.

"We feel like we've got a brilliant squad here, with a lot of talent and a lot of cohesion.

"Tonga will be a tough test for us, because they're a very proud nation, a very physical team, a lot of devastating players.

"We feel in a good place - we feel like we're tighter than ever, and we're just excited to get going in what's going to be a brilliant tournament."

Doncaster Knight's Morath, who is Tonga's all-time leading scorer with 340 Test points, and Bristol's Piutau are two of four players to have survived from the Polynesian kingdom's final match of the 2015 tournament - a defeat by eventual champions New Zealand in the group stage.

BBC Sport users opt for Slade and Cokanasiga instead

We asked BBC Sport readers to pick their England XV to face Tonga and some 55,000 of you took part.

Here's who you picked:

Farrell was selected as the first-choice fly-half but was also a popular pick at inside centre behind Tuilagi, however, Slade made more teams than Farrell at centre.

The closest battle was at full-back where Elliot Daly was named in 54% of the teams and Anthony Watson in 46.

Conway and Larmour start for Ireland
Previous Item
NEXT

Taylor & Sam start at centre against Ireland
Next Item