Euro 2020 qualifiers: Who needs what in final games?

Nineteen Euro 2020 qualifying spots down, five to go after Denmark and Switzerland booked their places on Monday.

England secured their spot on Thursday. Wales are still in contention for a top-two finish, although they are guaranteed a play-off place in March 2020 if they fall short.

Scotland, Northern Ireland and the Republic of Ireland will be in next year's play-offs.

So who is through and who needs what to join them? And how do the play-offs work?

Who else is in a top-two spot? Hungary

Who else can qualify? Slovakia, Wales

Who will be top seeds? There will be six top seeds for the Euro 2020 draw on 30 November. Four have been confirmed so far - Belgium, Italy, England and Ukraine.

At least one of Germany, Spain and France will miss out on a top seed spot. Champions Portugal will not be a top seed.

England booked their place at Euro 2020 - as group winners - with a 7-0 win over Montenegro on Thursday and beat Kosovo on Sunday to seal a place as a top seed. The Czech Republic had sealed their place when they came from behind to beat Kosovo 2-1.

Defending champions Portugal laboured to a 2-0 win against Luxembourg on Sunday to qualify as runners-up in Group B, behind Ukraine. Cristiano Ronaldo's side will not be among among the top seeds.

Germany and the Netherlands both sealed their Euro 2020 places on Saturday - with a 4-0 win over Belarus and 0-0 draw with Northern Ireland respectively. Germany are likely to end up being seeded as a result of the Dutch dropping points.

Michael O'Neill's side will be in the play-offs next March. 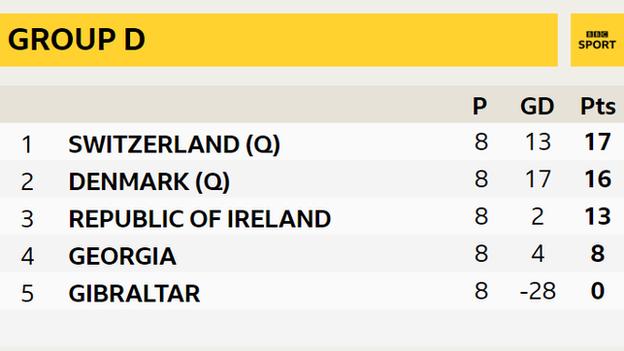 The Republic of Ireland will will have to rely on the play-offs to qualify for Euro 2020 after they finished third in Group D following a 1-1 draw with Denmark in their final group game.

The point was enough for the Danes to go through as runners up while Switzerland won the group after beating Gibraltar 6-1.

Wales kept alive their hopes with a 2-0 win in Azerbaijan and will be guaranteed a place at Euro 2020 if they beat Hungary at home on Tuesday in a winner-takes-all game. A draw would open the door for Slovakia if they beat Azerbaijan at the same time.

Croatia came from behind to beat Slovakia 3-1 on Saturday and qualify for the European Championship. 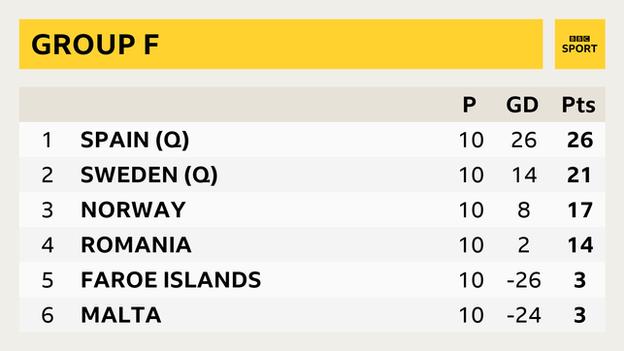 Sweden booked their place at Euro 2020 with a 2-0 win in Romania. They finish second behind Spain, who have won the group. 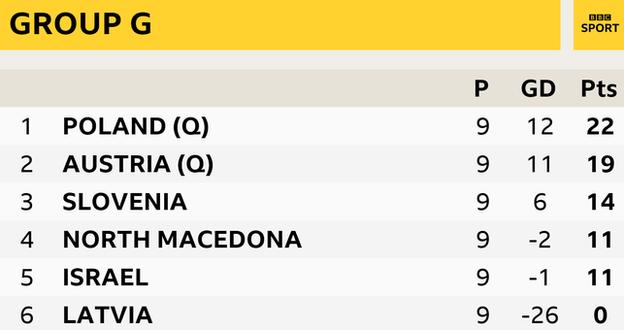 Austria sealed a Euro 2020 spot with a 2-1 win over North Macedonia on Saturday. 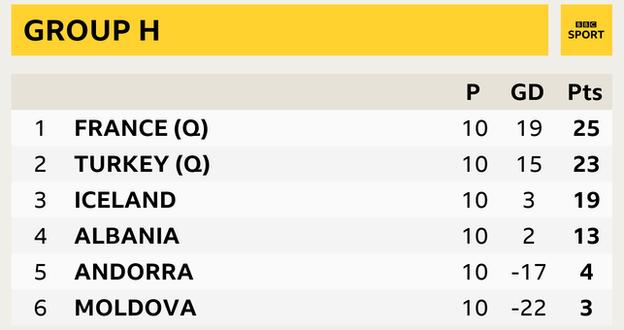 France and Turkey both qualified for Euro 2020 with a game to spare. Les Bleus ensured top spot in the group - although not definitely a place as top seeds - with a 2-0 win in Albania on Sunday.

Iceland will be in next year's play-offs. 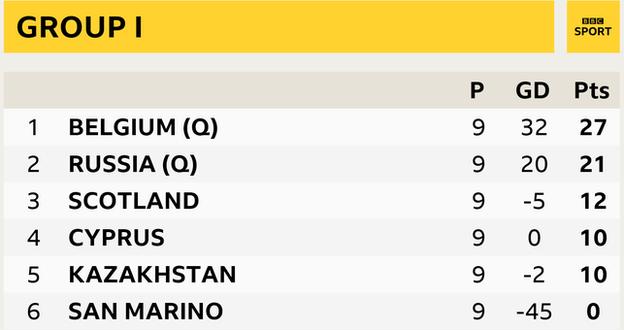 Belgium and Russia have already qualified, with Roberto Martinez's side sealing top spot with a 4-1 win in St Petersburg.

Scotland will be in March's play-offs regardless of where they now finish because of their performance in the Nations League. 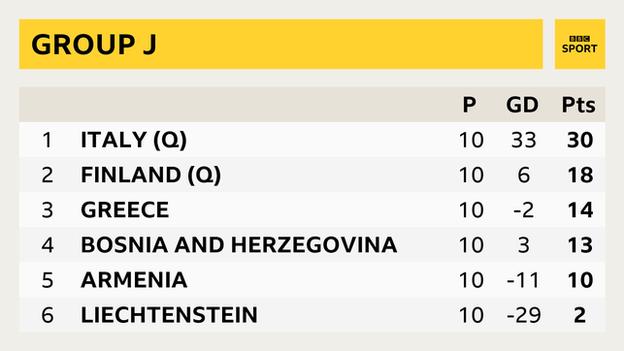 Finland beat Liechtenstein 3-0 at home on Friday to reach a major tournament for the first time in their history.

Italy, who beat Armenia 9-1 in their final group game, qualify as group winners after winning all 10 of their games.

Who are in play-offs as things stand?

If all the groups finish as they are now, these would be the 16 teams in next March's Euro 2020 play-offs. However, it could change in the coming days.

Draws would be held to decide which teams from Path B and C move up to Path A (although certain teams cannot move).

The highest-ranked team in each path will play at home against the country ranked fourth in a one-legged semi-final on 26 March, with the second highest at home to the third.

The host of each one-legged final - which will be one of the countries playing in the final - will be decided by a draw on Friday, 22 November. The winners of each path's play-offs - so four teams in total - goes to Euro 2020.