George North feels there is still "more to come" from his Wales career and has targeted winning 100 caps and Shane Williams' national try scoring record.

North, 27, has won 91 Wales caps and made three more Test appearances for the British and Irish Lions.

The Ospreys wing is sidelined with a hamstring injury and is targeting a Boxing Day derby return at Scarlets.

"One of my goals when I started was to play for my country 100 times. That is a huge ambition," said North.

North has also scored 39 tries in 91 Wales appearances and is third in the try-scoring list behind Thomas (40) and Shane Williams (58).

"For anyone to say they have played 100 times for your country, nobody could ever take that away or doubt you were a half-decent player.," said North.

"I want to chase down Shane as hard as I can, but I know that will be a tough ask."

North managed one try in the World Cup before tearing his hamstring in the 19-16 semi-final defeat against South Africa in Yokohama.

It meant he missed Wayne Pivac's opening game in charge against a Barbarians side coached by the only international coach of his nine-year Test career, Warren Gatland.

"Gats has left big enough boots to fill and I have been impressed with Wayne so far with his messages," said North.

"That week with the Baa-Baas was good and they have set their stall out early and have asked us if we are in.

"You can't do that much in a week and we will see the first big changes and their impact come the Six Nations."

North hopes to prove his fitness at Parc y Scarlets on 26 December or Saturday, 4 January when Ospreys travel to face Dragons.

"I did not have as much impact in the World Cup as I was hoping for, but towards the end of the tournament I was feeling as if I was back playing like I know I can be before another injury struck," said North.

"I just want to get back to being me again and with the time I have had off, I have my bounce back and am feeling positive.

"I had a bit of time away, which was good after the pressure point of the World Cup.

"As well as physically, mentally as well you need that break with the intensity and scrutiny. You just need that mental break and when I got home I slept for almost four days! 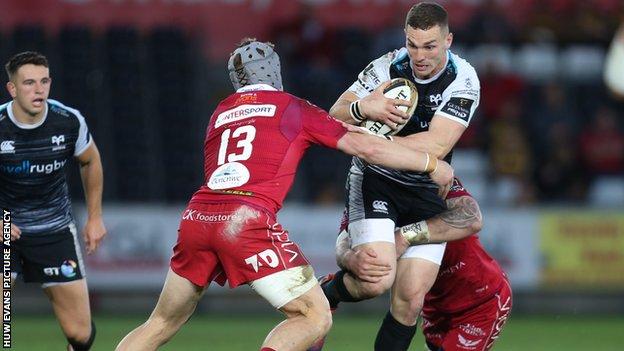 George North played for Scarlets before joining Northampton and Ospreys

"The World Cup was amazing. The end result was not what we were hoping for, especially after all the hard graft and months of work which went into preparing for the tournament.

"You focus on the ultimate goal and we came short. On reflection I thought the boys did tremendously well with the way we went about our work and the run of games we had.

"As a whole I think we can hold our heads up high and we have that taste for that last step. We go back into that cycle and hopefully we can go one step better next time."

Before North returns for Wales, he will aim to help a struggling Ospreys side who have so far lost nine out of 10 games this season and seen head coach Allen Clarke no longer in charge of first-team affairs.

"It has been tough for the boys," said North.

"I can't doubt the boys' fight, endeavour and desire. The boys and the region are having a lot of negative press around and it's a tough situation.

"Everyone seems to be rolling up their sleeves and getting on with things.

"Hopefully we can push on and make a big difference come the New Year and towards the end of the season.

"Trying to win silverware is why I joined and I truly feel as if we can still be up there. This year has been difficult because in World Cup year you could not predict so many injuries to our main squad.

"You have boys away and while it's been great guys have international honours, it puts pressure on the squad."

Watson fights back to reach second round

In-form Williams advances to third round

Novak into third round but Matteo is out

Bennett wins first stage of Tour Down Under