It has been a long wait for England to register an away win as big as the triumph over South Africa in the third Test in Port Elizabeth.

Not since that famous Ashes triumph in 2010-11 have England won an overseas Test by an innings.

In beating the Proteas by an innings and 53 runs to go 2-1 up with one match to play, England put in a classical Test performance.

They laid a solid foundation with the bat on the first day, then accelerated towards 500 on the second. After that, it was all about pressure with the ball.

It's a far cry from the start of the series, the first-Test defeat at Centurion, when everything was looking rather shambolic.

At the time, we rightly criticised captain Joe Root for choosing to bowl first, but it must have been so difficult for him to be leading a team that had been torn apart by illness.

Their preparation was disrupted, players were having to be kept in quarantine and then waking up each morning wondering who was going to be next on the sick list.

Add the horrible situation surrounding Ben Stokes' father being admitted to hospital to the mix, and it created an almost impossible situation.

Since then, the victories in Cape Town and Port Elizabeth have been much more like it.

I said at the start of the series that I felt England would win, chiefly because of the disarray that South Africa find themselves in - this latest defeat is their seventh in eight Tests.

You can only beat what is in front of you and that is what England have done. Still, the relative strength of their opposition must be taken into account when we evaluate the progress of Root's men.

We won't go over the top, because with England you never know what is around the corner, but you can see the foundations of a new-look team being laid.

There was Dom Sibley's maiden century in Cape Town, now followed by Ollie Pope's first hundred in the third Test.

As I wrote after that knock, Pope is very impressive. He looks like someone who will score a lot of runs for England for a long time to come. He seems grounded, so will continue to work hard at his game even though he is getting lots of plaudits.

And after Pope's innings came the five-wicket haul of his fellow 22-year-old Dom Bess. For an off-spinner to have that sort of success against a team filled with right-handers is an excellent achievement.

Bess is a confident character whose bowling has improved since his last stab at Test cricket, two matches against Pakistan in 2018.

He has more variations and has improved his accuracy. In the second Test in Cape Town he did an important holding job, so it was nice for him to be rewarded with the wickets he deserved in Port Elizabeth.

Has Bess leapfrogged his Somerset team-mate Jack Leach as England's number one spinner? That is a hard question to answer, but what we can say with certainty is that Bess' emergence leaves England in a much better position before the tour to Sri Lanka in March.

We still don't know if Moeen Ali will make that trip, but if Leach is fit, he could link up with Bess, perhaps with Joe Root and Joe Denly offering some back-up. It's a better picture than it was a couple of weeks ago. 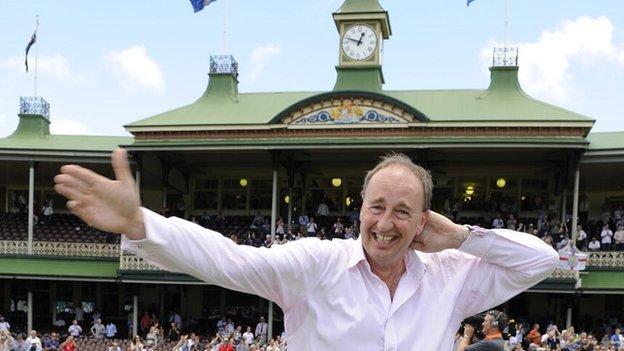 After England's last innings victory in an overseas Test, Aggers celebrated England's 3-1 Ashes series win in Australia by doing the 'sprinkler' dance on the outfield at the Sydney Cricket Ground

Before they think about Sri Lanka, England have this series to win, which they will do if they avoid defeat in the fourth Test in Johannesburg, which begins on Friday.

That is not a certainty, but given the way these two teams now seem to be going in opposite directions, I would be very surprised and disappointed if England throw it away.

Because the Wanderers is at altitude, with the thinner air and fast pitch allowing the ball to zip through, England may again opt to go for five pace bowlers, especially if Jofra Archer is fit after his elbow injury.

Root would love to put the speedy pair of Archer and Mark Wood together in the same team, but that would mean making a change from the third Test.

England have played five pace bowlers in two Tests this winter, so they are not against doing it, even if they won neither of those matches. However, can you really drop Bess after how well he has performed in the past two matches?

If they want a spinner and Archer, then Sam Curran - perhaps unfairly - is the most vulnerable. However, that would make the batting look a little light.

These are the things that England must ponder and they will only get a clearer indication of the answers when they see the pitch.

How South Africa must wish for England's kind of problems. At the moment, they are a ship steaming off in the wrong direction.

Faf du Plessis is part of a middle order not getting any runs, even if the skipper did the right thing by ending the speculation over his immediate future in his post-match press conference.

Pace bowler Kagiso Rabada is banned for the final Test and seamer Vernon Philander is drifting into retirement.

It seems like a massive task for the management team of Graeme Smith, Mark Boucher and Jacques Kallis to turn things around before Friday.

Atletico were so hard for Liverpool

Motherwell down to 'bare bones' - Robinson

Borthwick to join Leicester as head coach
Previous Item
NEXT