Australian Open: Play delayed on outside courts by dust and mud following rain

Play was delayed on the outside courts at the Australian Open on Thursday because of the dust and mud that came down during a rainstorm in Melbourne on Wednesday night.

The courts had to be power-washed with organisers saying the start would be delayed by three hours on most of them.

Play eventually began on courts three and 19 but rain then forced a suspension until nearly 04:00 GMT.

After the rain stopped, five courts had still not started by 05:00.

Matches began as scheduled at 00:00 on the three courts with a roof.

On Margaret Court Arena, Swiss Belinda Bencic overcame Latvia's Jelena Ostapenko in a fluctuating match to the reach the third round.

Czech second seed Karolina Pliskova had a straightforward 6-3 6-3 win over Germany's Laura Siegemund and will play Russia's Anastasia Pavlyuchenkova or American Taylor Townsend in the last 32.

Bellis, who was was told she may have to quit tennis after struggling with wrist and elbow injuries, will next face Belgian 16th seed Elise Mertens who beat Britain's Heather Watson 6-3 6-0.

Jamie Murray and Neal Skupski's first-round men's doubles match was cancelled because of the backlog to the schedule on Thursday.

There were delays to Australian Open qualifying last week because of the "very poor" air quality from ongoing bushfires in the country. 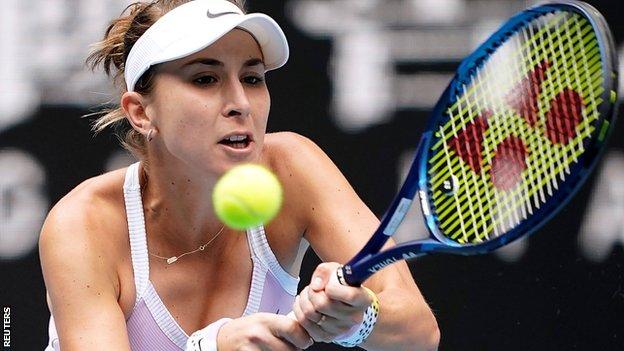 Belinda Bencic reached the semi-final of last year's US Open

Melbourne is the city which coined the phrase - and inspired the Crowded House song - Four Seasons in One Day. On Wednesday it appeared to be monsoon season.

But, unusually, the rain band threw down a slurry-looking orangey/brown dust.

This murky torrential rain started as fans left Melbourne Park after Roger Federer's win at about 10:30pm and continued to hammer down overnight.

Apparently brought down from the dusty north, it was deposited over Melbourne and left clothes, cars and tennis courts covered in brown dirt.

Most strikingly it turned the city's arterial Yarra river - called the 'upside down' river because of its high turbidity - looking even slurrier than usual.

For the Australian Open, it meant a clean-up operation powered by jet-streamed hoses and squeezy mops on the courts - although it begged the question why covers are not used in these situations.

As one tennis fan quipped on Twitter, the clay season came early.

Hearts cruise into Round of 32

Chambers has had his contract terminated

Fury destroys Wilder and offers him a rematch

Salisbury sees off Evans in doubles
Next Item