Max Lowe: "I do not think it is acceptable for myself and my team-mate Jayden Bogle to be judged by the colour of our skin"

Derby County player Max Lowe has said he is "shocked" by comments from pundit Craig Ramage on BBC Radio Derby that suggested "young black lads" should "go back to basics, working hard".

Ex-Rams midfielder Ramage was speaking on the Sportscene Podcast after their 1-1 draw with Huddersfield Town.

The BBC said the comments were "entirely unacceptable".

Former England Under-21 international Lowe said he had decided to "speak out on behalf of black players at Derby County", including fellow full-back Jayden Bogle, 19, whose recent performances, along with Lowe's, came in for criticism by Ramage.

During the broadcast, Ramage, who the BBC confirmed would no longer work with the corporation, said: "When I look at certain players, their body language, their stance, the way they act, you just feel, hold on a minute, he needs pulling down a peg or two.

"So I'd probably say that about all the young black lads, all the young advice if they wanted it, that, you know, it's about, when you are struggling for form, you are going through a sticky patch, it's about going back to basics, working hard, and doing the right things."

Ramage later apologised "unreservedly" on Twitter "for a comment that I made after yesterday's game", adding it was "wholly inappropriate and unintentional" and that "race is irrelevant to the issues that I was discussing".

Following the podcast's publication, Lowe posted a statement on Instagram that said: "As a young black footballer making my way in the game, I was shocked by comments made by one of the analysts on BBC Radio Derby's Sportscene programme after our 1-1 draw with Huddersfield."

He continued: "Racial ignorance, stereotyping and intolerance negatively affects the image of impressionable young footballers and creates an unnecessary divide in society.

"I am also disappointed that a public service broadcaster did not step in to ask the analyst to explain his reasoning or to distance themselves from these archaic thoughts.

"This was a broadcast at the same time BBC Derby is promoting a 27-minute feature with former Rams defender Charlie Palmer about the difficulties he faced as a young black footballer in the 1980s."

He added that "as a professional footballer at an ambitious, high-profile Championship club I know that my performances will be scrutinised and I have no problem with that whatsoever - but I do not think it is acceptable for myself and my team-mate Jayden Bogle to be judged by the colour of our skin".

Derby County FC said it was "aware of comments made by a BBC employee after yesterday's game against Huddersfield Town, directed specifically at a section of our young players".

The club added: "We have been in contact with the BBC throughout the day and underline that we do not in any way condone any form of discrimination.

"We take comments like these extremely seriously, we do not tolerate them, and stand shoulder to shoulder, together as one with all our players."

A BBC spokesperson said: "These were entirely unacceptable comments and we will no longer be working with Craig."

Ramage's full apology said: "I wish to apologise unreservedly for a comment that I made after yesterday's game.

"What I said was wholly inappropriate and unintentional. Race is irrelevant to the issues that I was discussing and I deeply regret what I said. I sincerely hope that the players accept my apology.

"I would like to reiterate my heartfelt apology not only to the players but also the fans that have listened to me over the past seven years and also to those that followed me throughout my career.

"I would like to reinforce that this error in no way reflects my personal views." 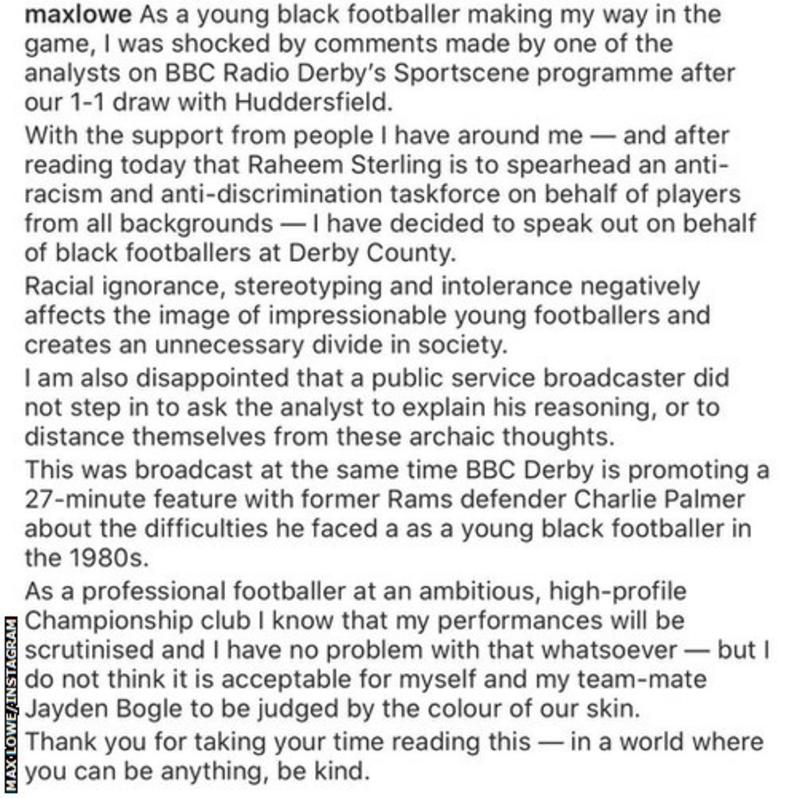