Two young table tennis talents, Ibrahim Gado and Richard Ofori, captured the moment with an exhilarating performance in an epic clash in the Chairman’s Cup staged at the Fantasy Dome at the Trade Fair Centre, Accra, last Saturday. 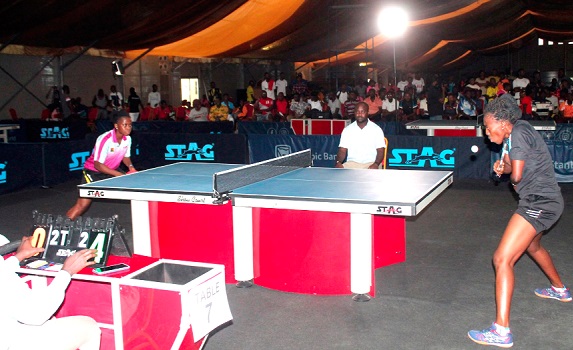 Teenage sensation Gado and Ofori sold out a good performance in a five-set thriller in the final of the Boys U-16 singles to bring the curtains down on a day of impressive table tennis, the first major event on the Ghana Table Tennis Federation’s calendar.

Gado fought off a late charge by his opponent for a 3-2 victory after winning the fifth set 11-9 before falling on his back in excitement and being carried away by his teeming supporters in a match watched by a sizeable crowd, including three legends of the sport, Ethel Jacks, Emmanuel A. Quaye and Esther Lamptey, all former African champions in their heyday.

He received a trophy, a momento and cash while his competitor Ofori also got cash for his efforts.

The annual competition moved from its traditional home of the D.G. Hathiramani Hall at the Accra Sports Stadium to the spacious dome which was turned into a fine indoor sporting arena. It attracted 160 tennis players made up of junior boys and girls, senior men and women and some veterans of the game and had 16 tables being symmetrically laid in an International Table Tennis Federation-standardised playing format, which the Ghana Table Tennis Association (GTTA) hopes will become the standard for future competitions.

The GTTA president, Mr Mawuko Afadzinu, expressed his satisfaction with the high level of performance in the competition and charged players to sustain the momentum in their communities. He appealed to corporate bodies to support the rapid growth of ping-pong in the country.

Decision on Wimbledon to be made next week

"Dont overlook of other diseases"

Who will start for England at Euro 2021?