'Neymar is great but so are Mbappe & Di Maria' - Dortmund boss

Brazil forward Neymar has been named in the PSG squad for the Champions League last-16 tie, having missed the last four games with a rib injury.

"They have so many players with great qualities. They beat Real Madrid even without Neymar," said Favre.

"Neymar is a great player but so are (Kylian) Mbappe and (Angel) Di Maria."

PSG have exited at the first knockout round of the Champions League in the last three seasons.

This season they progressed by topping a group containing 13-time European champions Real Madrid with five wins from six games.

"I can name at least 10 players on that team with huge potential," Favre added.

"They are a dangerous team. When you lose the ball, they move very fast up front. The key will be how we defend.

"It's important we're very strong on winning the ball and then, when in possession, that we stay calm."

Dortmund midfielder Axel Witsel agrees with his manager that PSG are far from a one-man team.

"If Neymar plays, and I am pretty sure he is going to play, then we have to take care of him," said the Belgium player.

"But they have so many good players we have to be compact and we have to defend as a team and really be strong."

The tie between Ligue 1 leaders PSG and Dortmund, who are third in the Bundesliga, could be a thriller - PSG's last five game have contained 29 goals, while Dortmund's have witnessed 27.

'It's not Jurgen Klopp coming back' 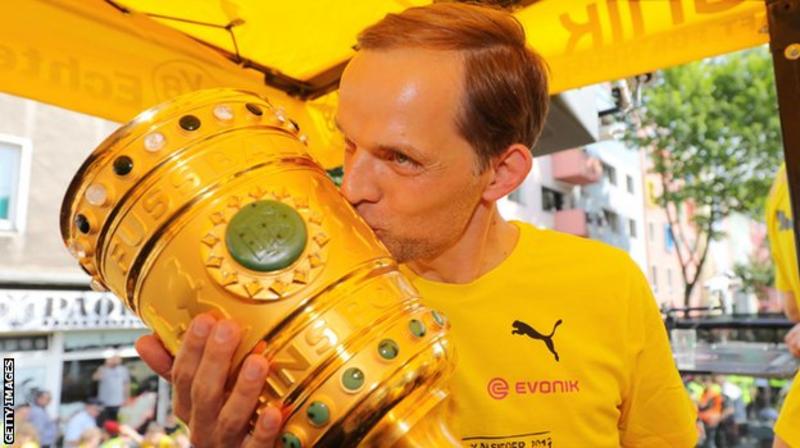 Tuchel led Dortmund to victory in the German Cup on 27 May 2017, but was sacked just three days later

Tuesday's game sees the return of PSG boss Thomas Tuchel to Dortmund, whom he managed from 2015 to 2017, before being sacked shortly after winning the German Cup.

Relations between Tuchel and chief executive Hans-Joachim Watzke became strained after Dortmund's team bus was damaged by an explosion in April 2017.

Tuchel claimed neither he nor his players were consulted about whether they should play their Champions League quarter-final home tie against Monaco fewer than 24 hours after the incident, but Watzke denied that was the case.

"It's not Jurgen Klopp coming back," said Watzke. "Thomas Tuchel is a great coach and when I see him, I will certainly greet him and I think he will do the same.

"We worked well together for two years, and in the end things got a bit tough. We will certainly not become great friends in life any more. But that was three years ago."

'No direct clashes' with Olympics for Lions

K. Owusu was one of Ghana’s finest strikers

Casillas to run for SFF presidency
Next Item