The video assistant referee "didn't get it right" in Chelsea's 2-0 home loss to Manchester United and it was "soul destroying" for the supporters, says Blues boss Frank Lampard.

Kavanagh also ruled out two Chelsea goals - one for a push in the box and the other for offside.

Headers from Anthony Martial and Maguire secured a first league double over Chelsea for Manchester United since the 1987-88 season.

Chelsea became only the second team to have two goals awarded on the field but then ruled out by VAR in the same Premier League game, after Sheffield United against Brighton in December.

What were the incidents that displeased Chelsea?

Lampard: "I've seen it again and VAR is there for that and they didn't get it right. Harry Maguire should have been sent off, that's clear, and that obviously changes the game."

United boss Ole Gunnar Solskjaer: "Was Harry Maguire lucky? I don't think so. He was fouled first and Batshuayi was going to fall on top of him so he put his leg out and hit him where it hurts."

Maguire: "I know I caught him and I felt he was going to fall on me and my natural reaction was to straighten my leg to stop him. It wasn't a kick out and there was no intent. I think it's the right decision. I apologised to him and it was nice that the referee saw sense."

Former Chelsea striker Chris Sutton on BBC Radio 5 Live: "That's a big call. Fred shoves Azpilicueta into Williams - the goal should stand. That's ridiculous. Wow. You have to question what Stockley Park are seeing there.

"They want their heads banging together. I'm bamboozled by that decision. Fred was the instigator in all this."

Azpilicueta: "Of course, for Zouma's goal I pushed Williams but I was pushed. At least go to the monitor - it takes 30 seconds. The referee on the pitch has to be the one to take the decisions.

"My intention when I ran to the front post was not to push Williams. I'm not saying the push from Fred was a penalty but my push is a consequence of his push."

Lampard: "Azpilicueta gets a shove in the back - it's not clear, it's not obvious, Azpi has been pushed in the back."

Solskjaer: "I didn't see a foul by Fred for the disallowed goal." 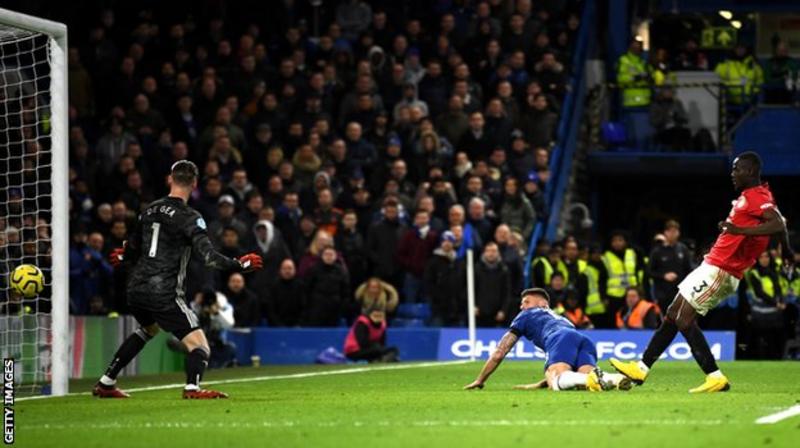 Lampard: "It's a bit soul destroying [for the fans] but it's the culmination of a few incidents. VAR is there for that and a toe offside is a toe offside, even if we don't like it."

Sutton: "The roof is going to come off this place. It's a brilliant centre-forward's header. The Chelsea fans are leaving in their droves. It's not 10 or 20 people - it's hundreds who are departing Stamford Bridge."

Solskjaer: "Luckily there was no VAR when I played. Giroud was a foot, or half a foot offside - at least it wasn't an armpit."

What you said on #bbcfootball:

Mark S: How can that not be a red card for Maguire? VAR sent off Son [Heung-Min, the Tottenham forward] for far less earlier in the season. Have the rules changed since then?

Ben: Maguire is a lucky boy. Should have been red.

Matt: I'm not a fan of either team, but it infuriates me that the goal was disallowed. Fred pushes Azpilicueta who, in turn, pushes Williams. Why disallow the goal?

Tristan: How on earth is that clear and obvious if it looks like Fred fouled Azpilicueta first?

Andy: Offside is offside. That would have been offside everywhere.

Garth Crooks' team of the week
Next Item