A year ago, Rosie Galligan won her first cap for England. After a nightmare five months, she is yet to earn her second.

Galligan contracted meningitis in September 2019. She recovered and returned to play for club Saracens, only to sustain an injury seven weeks later that will keep her out for the rest of the season.

Now, she can only watch the Red Roses' charge to a second successive Six Nations Grand Slam from the sofa as she recovers.

After such a tumultuous time it would be easy for the 21-year-old to be angry at her run of bad luck but Galligan is facing this adversity with maturity, humour and positivity.

When asked to describe what her latest injury involves, the second row laughs and replies: "Everything."

After telling the terrifying tale of falling ill with meningitis, she breaks the tension by saying she has a "funny photo" of the first time she was let out of quarantine for some fresh air. 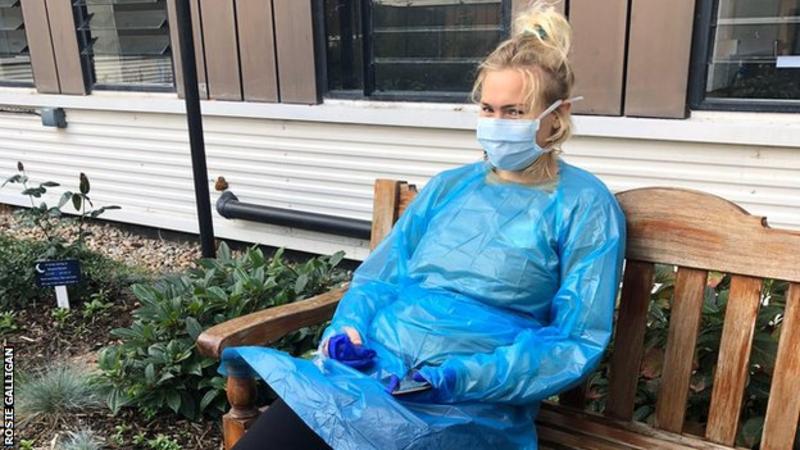 'I lost the ability to walk'

Her body felt heavy, she vomited and then lost the ability to walk. The following morning she noticed a rash, called 111 and was taken to hospital in an ambulance.

Galligan says she "had a little cry" when she was told she had meningitis, but the toughest part was the isolation.

Within a couple of days she had gone from frequently training with a team and being part of one of the best clubs in women's rugby to sitting alone in a room, quarantined for 10 days.

"I struggled not being able to see anyone," she adds. "It was more the social element and missing out on training and game days.

"I got lots of support through the girls and the club. [Fellow Saracens and England forward] Poppy Cleall sent an Oreo waffle with ice cream to my hospital room." 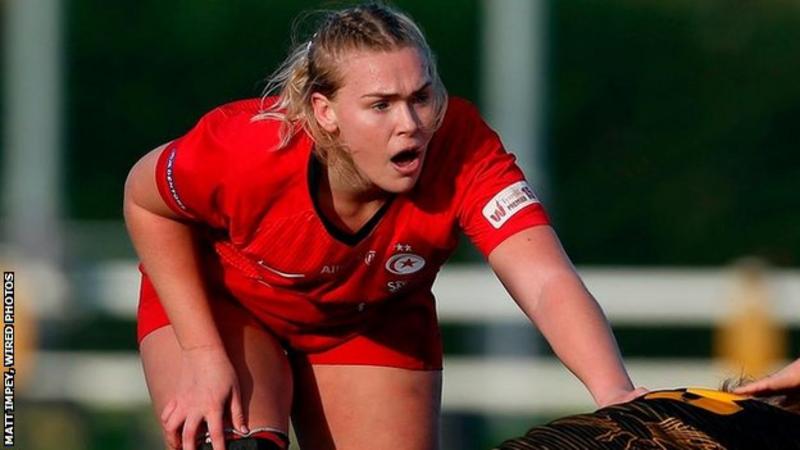 Galligan plays for Saracens in the Premier 15s

After leaving hospital, Galligan rested for another week at home before attempting exercise.

Eight months earlier she had been making her international rugby debut against Ireland, but on this day a short bike ride was all she could manage.

"My first bit of exercise was a six-minute really slow bike," she says.

"Although it was really slow and probably the easiest thing ever, I was puffing and sweating. It showed how long a process it was going to be."

The transition from being an elite athlete to someone who struggles to complete six minutes of exercise cannot have been easy.

But Galligan actually says she was "relieved" the day she went on the bike, it was a few weeks later when things got tough.

"I struggled a bit mentally," she says. "I still felt like I was having to pull out of training and I was getting demotivated and down about it.

"It was about knowing there were going to be hard days and there were so many people around me picking me up and talking to me to try and avoid those negative feelings."

Galligan did manage to overcome those negative feelings and was back on the rugby pitch by the end of November.

She played three more games, then in January the unthinkable happened.

The forward had only been on the pitch a few minutes in a game against Worcester when she fell in a line-out, rupturing three ligaments, fracturing a bone in her leg and shattering her ankle bone.

Surgeons have told her it is a rare break and she now has four pins, a scaffold and a plate in her ankle. 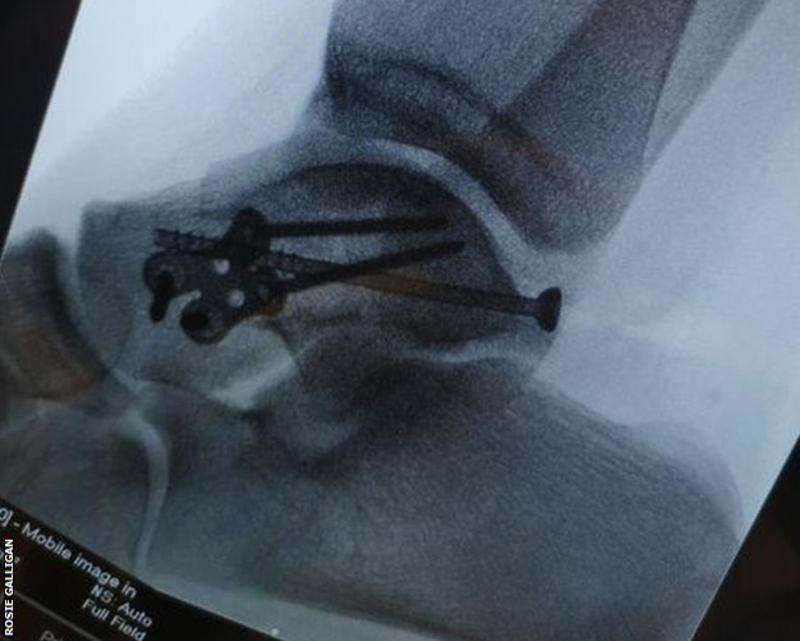 Galligan now has four pins in her ankle

Galligan still has another three weeks before she can start walking again, but with characteristic positivity she is already finding solace in the gym.

"From the moment I did it and the amount of pain I was in, I knew it was a bit of a write-off," she adds.

"Sometimes it can mentally affect me negatively. Because of the season I've had, it is just one of those things. Everyone has a bad season or two. I have taken it on the chin.

"As soon as I have been able to get in the gym, I've done it as much as I can. The gym is helping me stay a bit more sane."

After all Galligan has been through, she is not putting any pressure on herself to play again soon and even suggested the extra time out could be a good thing on the long road to recovery from meningitis.

"I probably still am not fully healthy," she admits.

"I know some people have taken years to get fully better. Now I have a long break with this injury it is a great time to have some TLC and hopefully come back fully fit and fully healthy as well.

"I don't want to set unreal expectations. I'm normally one to try and work hard to get back but with the year that I've had I want to focus on getting back to full fitness and not try to rush it so I cause more issues." 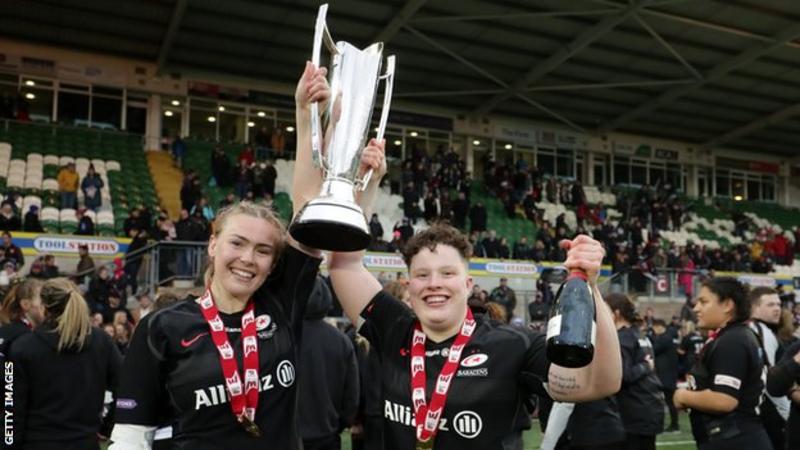 Watching England 'is not a nice feeling'

Although Galligan has stoically accepted her sideline fate this season, the wall of positivity comes closest to cracking when discussing England's Six Nations campaign.

Galligan could only watch from the sofa and says it was "not a nice feeling" but only allows herself to dwell for a moment before optimistically looking to the future.

"I would rather be out on the pitch playing but instead I'm sitting in front of the TV with a cup of tea and some Hobnobs," she says.

"I'm hoping I can come back from this a lot fitter and a lot stronger than I was before. Maybe this is going to help me in the long run.

"I'd love to be involved in the World Cup next year. My chances at the minute are on the lower side. You never know what can happen.

"It's all down to how hard I work, how much I want it. I have to keep trying, performing well and get my name known when I return."

England to play Tonga in autumn
Next Item