Former McLaren boss Ron Dennis has created a scheme to supply a million free meals to NHS workers during the coronavirus crisis.

Dennis says his foundation has put in place a £1.5m budget and joined forces with a number of companies to supply 1,000 meals a day to health workers.

"I wanted a big solution to a big problem," the 72-year-old said.

"It is an amazing effort, which I think is reflective of my reputation. If I say I'm going to do something I do it."

Dennis was prompted to take the action after a family meeting with his children.

His daughter, Dr Charlotte Hall, said: "We were talking about how we as a charity could help everyone in the current coronavirus crisis.

"We can't help medically but we could perhaps make the situation just a bit more bearable - being in the hospital, taking away the stress of getting food, having something hot and nutritious to eat or having something to look forward to when you get home.

"I never doubted him. We know he would rise to the challenge and he certainly has."

Dennis says he made a series of phone calls to contacts and other business leaders and put together a taskforce to kick off the project. 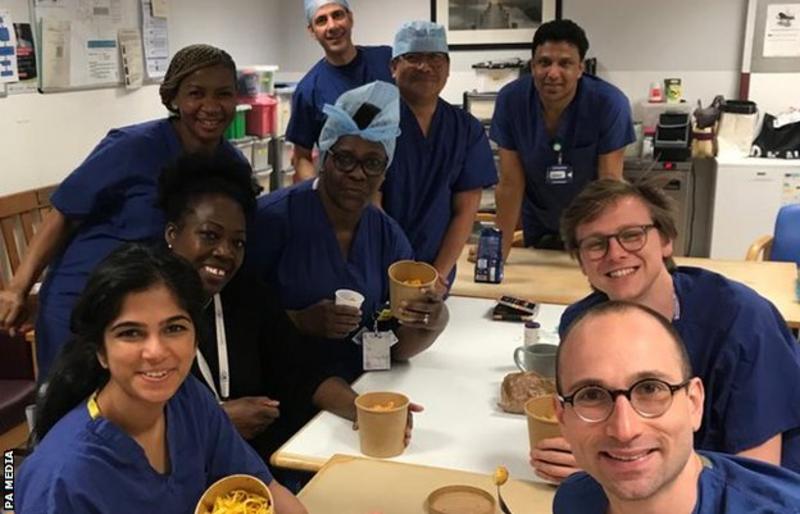 He told BBC Radio 5 Live: "It all started to unfold, but the real breakthrough was when I phoned Dave Lewis [the chief executive officer] at Tesco and 20 minutes later he phoned back and said: 'We're behind you.'

"We had great logistics in place but we needed volume. We now have volume and as we speak we are ramping up. The first meals are being prepped to go to John Radcliffe Hospital in Oxford and we're looking at 1,000 meals a day. It will be challenging, but we will get there."

Dennis' intervention is the latest in a series from figures associated with F1.

A consortium of British-based teams have become involved in increasing the capacity of ventilators to the NHS, while in Italy F1 tyre supplier Pirelli has donated 100,000 euros to charities fighting the crisis.

Last month, the Agnelli family that controls Fiat and Ferrari donated 10m euros to the Italian government to help with the coronavirus effort.

Dennis issued a plea for people to respect the official advice on social distancing.

"We have to think what is the likely outcome," he said. "It is an incredibly infectious disease.

"The real loss of life is going to come in the townships, the favelas, central Africa, where there is no running water, no chance (for people) to wash their hands.

"As people look at their own countries, they have to be prepared for something much bigger.

"The only thing that is going to stop this waving across the world and causing phenomenal loss of life is a vaccine.

"It is going to get horrendous in the third world and we are struggling to get people to do fundamental things like stay indoors, and they don't appear to understand why.

"They will have it reinforced in the future. We are [in danger] of seeing the biggest lost of life this world has ever seen. We need to focus on getting a vaccine. Be mindful of what's coming - this is a long, long way from being over."