This week the streets of Bergamo should be buzzing with excitement as Atalanta prepare for the biggest game in the club's history - a Champions League quarter-final.

Instead they are silent, but for the sound of ambulance sirens and church bells ringing for the latest victims of the coronavirus pandemic.

Six weeks since the city rejoiced at their side's 4-1 Champions League first-leg win over Valencia, Bergamo has been at the centre of the global pandemic. Sadly, it's now thought that game contributed to the Italian outbreak.

Atalanta also won the second leg - behind closed doors - to reach the quarter-finals in their first Champions League season, although they never found out who their next opponents would be, with most European football suspended before the draw was made.

Despite being a provincial team with no big names and operating with a modest budget, they have become arguably Europe's most exciting team to watch.

But, like the team itself, Atalanta's fans are now using their collective strength to help Bergamo find a way through the crisis.

How did Atalanta get there?

While Bergamo lies in the shadow of the Alps, Atalanta have spent much of their existence in the shadows of AC and Inter Milan.

La Dea, as they are also known, have only won one major trophy and their best Serie A finish was sixth - until Gian Piero Gasperini took charge in 2016.

The veteran coach transformed the team, merging Atalanta's latest home-grown youngsters with a multi-national cast of journeymen and obscure signings, using the fluid 3-4-3 system he honed at Genoa.

It is entertaining, it is risky, but by and large, it has worked. Atalanta came fourth in Gasperini's first season, seventh in 2018, and third in 2019. They also reached last year's Coppa Italia final.

If Gasperini is the mastermind, long-serving captain Papu Gomez is the fans' favourite. Both are now honorary citizens of Bergamo and appear on a mural in the city.

Gomez, 32, has stayed loyal after becoming renowned for his "floss" dance goal celebration in 2016-17, before it appeared in online video game Fortnite and became a viral craze.

Humble and selfless, he typifies Gasperini's Atalanta and why their passionate fans have taken them to heart.

They have never relied on one or two key players. They have had 10 different scorers in this season's Champions League, more than any other team - some feat after the way they started.

Halfway through the group stage, Atalanta's adventure looked over. Yet somehow they recovered to become the first team to reach the knockout stages after losing their first three games.

A 3-0 win at Shakhtar Donetsk proved decisive. And when the team arrived back in Bergamo at 2am, 2,000 fans had braved the cold to welcome them home.

Atalanta have had to play their Champions League home games at the San Siro stadium, in Milan, as their own stadium did not meet Uefa requirements. They average 17,600 at home but over 40,000 - a third of the city's population - made the 37-mile trip from Bergamo to Milan for the first leg against Valencia on 19 February, a drive that normally takes 40 minutes took three hours.

Back in Bergamo, a city where every newborn is sent free milk and an Atalanta shirt by the club, they gathered in homes and bars to watch La Dea's biggest ever match.

With an hour gone, they were 4-0 up, including two goals from Dutch wing-back Hans Hateboer, a £1m signing in 2016.

In the San Siro stands and back home, Atalanta fans embraced after each goal. They were in dreamland. But no-one knew what was around the corner. 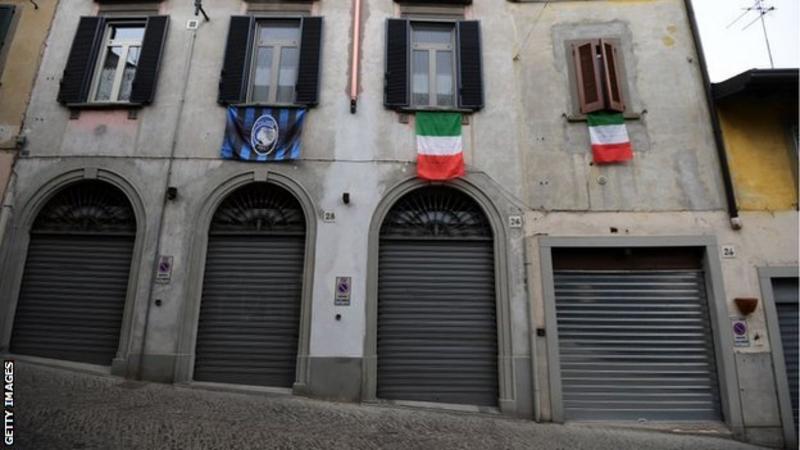 Dream turns to a nightmare

At the time, China was the centre of the coronavirus outbreak. But, two days after the San Siro game, the first cases were confirmed in Bergamo's region of Lombardy.

Atalanta fans were checked for symptoms before the Serie A game at Lecce on 1 March, when Colombian striker Duvan Zapata scored a hat-trick in a 7-2 win. It was the third time La Dea had scored seven this season.

There have been 12 Serie A hat-tricks in the last two seasons and Atalanta players have scored seven of them. For the second season running, they are Serie A's highest scorers.

Just before the second leg with Valencia on 10 March, Italian sport was suspended and the country was put on lockdown. Atalanta were allowed to travel to Spain, to play behind closed doors.

Around 2,000 Valencia fans gathered outside their Mestalla Stadium. They could be heard cheering as Valencia came from behind to lead 3-2, only for La Dea to win 4-3 on the night, Josip Ilicic scoring all four.

After taking this season's goal tally to 21 in 29 games, Ilicic and his team-mates celebrated in the empty stadium, holding a T-shirt which read 'Bergamo, this is for you, don't give up'.

This time there was no welcoming party in Bergamo. The club had urged fans to stay at home.

"We were happy for an hour before we went back to talking about Bergamo," said Dutch midfielder Marten de Roon. "I never thought I'd have to deal with a situation like this.

"The streets are completely empty. All you hear is the sound of ambulances and the church bells that ring for the people who sadly passed away." 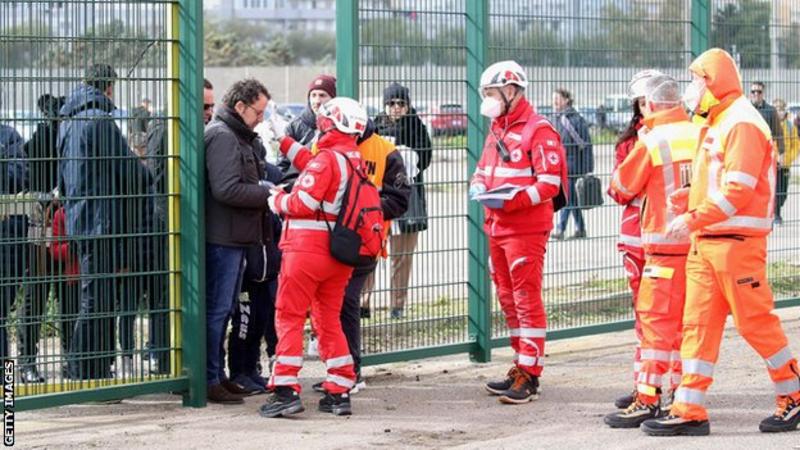 A city united in grief

After winning the Coppa Italia in 1963, Atalanta's celebrations were cut short as Pope John XXIII, who was born in Bergamo, died the following day.

The Bergamo hospital that now bears his name is at the centre of Italy's coronavirus outbreak.

The hospital has had to turn patients away while military trucks have been called in to transport coffins to crematoriums outside the city. In the province of Bergamo (population 1.1m) 2,060 deaths were recorded in March. Zaccharia Cometti, a goalkeeper in that triumphant 1963 squad, died last week.

But the tragedy has mobilised Atalanta fans. Around 1,200 received ticket refunds for the second Valencia game and donated the money to the hospital and a local nursing home - totalling 65,000 euros. Ilicic also donated his four-goal match ball to be auctioned.

"In our city and province, there are heroes who are facing this moment, working with insufficient means and exhausting shifts for everyone's health," read a post on the Facebook page for the Curva Nord supporters group.

A field hospital with 200 beds was built in 10 days, with Atalanta and their main sponsor purchasing the equipment and Curva Nord members helping to build it.

With La Dea's youth team having also punched above its weight in this season's Uefa Youth League, Gasperini will have the resources to keep rebuilding and bringing pride to the city.

Zapata has told fans: "We will have a big party together at the end of this dark period."

When that will be, who knows?

But one day the Bergamaschi will again be buzzing about Atalanta. And they will need each other more than ever.

La Liga could restart by end of May
Next Item