When third-tier side Bridgwater United take to the pitch on Sunday to play their FA Cup fourth-round tie it will be in front of a record crowd and fewer than six months into their existence.

And it will be against Manchester United.

Bridgwater emerged last year following the demise of former WSL side Yeovil, who struggled to stay afloat after being relegated from the women's top-flight in 2019.

At the start of this season Yeovil joined forces with Bridgwater Town, a men's team, to become Bridgwater United.

Now, with a new name, ambitions to get back to the WSL and preparations under way for the biggest game in their, admittedly short, history, Bridgwater will look to Sunday to inspire their resurgence.

It's an occasion defender Amy Goddard describes as a "dream".

Goddard, who also works as commercial executive for the club, previously played for Yeovil in the WSL but left at the end of the 2018-19 season.

Yeovil had hit rock bottom after being handed a 10-point deduction for going into administration, finishing the season 15 points adrift and eventually being relegated two divisions.

Goddard recalls the difficulty of that period, telling BBC Sport: "It wouldn't be a highlight of my career to say the least.

"You go through the bad times with Yeovil and you understand how much it affects everyone.

"I was a player and not involved in the background stuff but I feel that if we had the staff that we have now back then, then it would have been a completely different situation."

She was lured back to join Bridgwater from Championship side Crystal Palace - the side they beat 1-0 in the last round of the FA Cup.

Goddard said her job as a member of the club staff goes hand-in-hand with her playing career.

"Being part of any club is something special but it means a little more being part of the background staff as well. You want the club to succeed at all different levels, whether that is the business side of things or as a player focused on the league and cups," she said.

"My two roles are joined really closely as one. You have to have the passion behind it."

So why did Goddard, who names her career highlights as facing England stars Jill Scott and Millie Bright in the WSL, take a step down the football ladder and return to Bridgwater?

"Going from Palace in the Championship down another league, you wouldn't normally think about it, but with where the club is going and the vision they have for the future, it is all really bright - why wouldn't I want to be part of it?"

Bridgwater, who have sold out the 2,500 tickets for Sunday's match - a record for both the men's and women's teams, can take some inspiration from their next opponents. United may have more finances at their disposal than the Somerset-based club but they were only founded in 2018 and are now challenging for their first WSL title.

"If you look at where we are at and where Manchester United are at, yes there is a lot more money and funding for them but at the same time a club has to start somewhere," Goddard said.

"Our view and our dream is to be up there in the WSL. This game is massive for Bridgwater as a town. The town has never seen or heard of the big clubs coming." 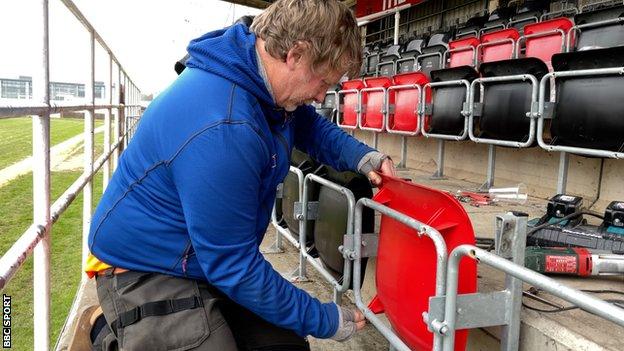 Extra seats have been put in for Sunday's match, which will see a crowd 10 times bigger than normal

Chief operating officer Ewan Greenhill echoed Goddard's ambition to make it to the women's top-flight and admitted that making it to the fourth round of the FA Cup to face the WSL heavyweights was "surreal".

"I don't think any of us can really downplay what this game means for the whole club," he said.

"To get a game of this size, being a relatively new established club and brand, means so much to everyone who has put a lot of time and effort into it.

"We are under no illusions as to how hard it is for us to get up the pyramid and we want both our first teams at the highest possible level they can be at. Something like this really does help showcase what we can do, and give us the platform to build."

While Greenhill said his side were not feeling the pressures of the occasion just yet, there have been some rumblings about whether a trip to Wembley could be on the cards.

"The players' group chat mentions Wembley the most! There's a bit of: 'Can we do it, can we get there?'"

I don't think anyone believed I could make it
Next Item