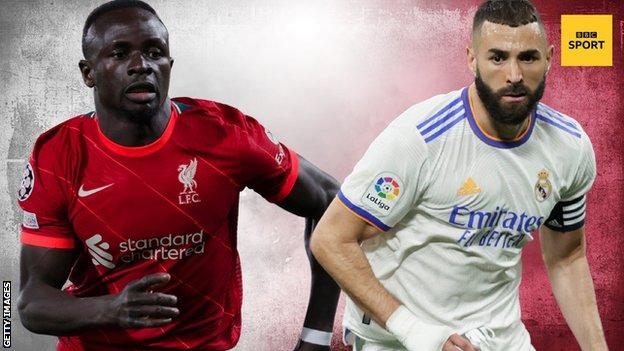 The outcome of the Champions League final between Liverpool and Real Madrid could decide who wins this year's Ballon d'Or, according to former Reds defender Djimi Traore.

The man who was left-back when the Anfield club won the trophy in 2005 thinks Senegal forward Sadio Mane is in contention for the award - but says he faces stiff competition from Real and France striker Karim Benzema.

Benzema, 34, has struck 15 goals in Europe this season to help the Spanish giants set up a meeting with Liverpool in Paris on Saturday (19:00 GMT).

Mane was instrumental in Senegal's first Africa Cup of Nations triumph in February and helped the Teranga Lions qualify for the 2022 World Cup, with the 30-year-old having also won two domestic cups with his club this season.

"I think Karim Benzema is in the form in his life - he's doing fantastically," Traore told BBC Sport Africa.

"I think the winner of the Champions League, the individual reward would be like winning the Ballon d'Or. Right now it looks like it'll be between Benzema and Mane."

Nominees for this year's Ballon d'Or will be revealed on 12 August, with the winner announced at a ceremony in Paris in 17 October.

Organisers France Football have decided the prize will now be judged on performances over a season rather than over a calendar year, which was the previous format.

Saturday's showdown between Real Madrid and Liverpool in Paris is a rematch of the 2018 Champions League final, when the Spaniards ran out 3-1 winners to clinch their 13th European crown.

Jurgen Klopp's Reds returned 12 months later to win the title for the sixth time and Traore thinks his old side are slight favourites this year, despite finishing second in the Premier League.

"They have a fantastic manager," the 42-year-old former Mali international said.

"Some of their players are the best in the positions they play. When you see Mo Salah, he's a top-class player, the best African player. You see Mane as well and after that you have (Virgil) Van Dijk and a couple of other players.

"They just got (Luis) Diaz - he was a great addition for the team. And they look confident.

"Maybe it's one of the first times Liverpool look like favourites in the final and that's something maybe they're not used to. They did it last time against Tottenham [in 2019], so why not do it again?"

Istanbul comeback in 2005 'sticks' with Traore

Traore was part of the Liverpool side which recovered from 3-0 down at half-time to draw 3-3 and beat AC Milan on penalties in the Champions League final 17 years ago.

The defender says that comeback, dubbed 'The Miracle of Istanbul', remains a fond memory.

"When I look back on that experience, it was one of the best moments in my life," Traore said.

"I went through different emotions and that's why it still sticks with me,

"In any sport, any coach would want to talk about that story. Because everything is possible if you believe and work hard, and if you don't give up.

Traore now works for the Right to Dream Academy, an organisation affiliated to Danish top-flight club FC Nordsjaelland with football academies in Denmark, Ghana and Egypt - and with plans to open another in America.

"I try to get the best players from each academy, and play games together around the world," Traore, who is head coach of the international academy, said.

"We try to make sure they grow as a player, but as a person as well, and prepare them to be ready to go into the professional world. It can be football and education, and that's what I love about it - it is authentic."

Rothwell signs for Bournemouth from Blackburn