Boeing has completed development of a software update for its 737 Max plane which was grounded following two fatal crashes within five months.

The US firm announced that it had flown the 737 Max with the updated software on 207 flights.

It added it would provide data to the Federal Aviation Administration (FAA) on how pilots interact with controls and displays in different scenarios.

The FAA expects Boeing to submit the upgrade for certification next week.

An Ethiopian Airlines flight crashed in March, killing all 157 people on board.

It followed the Lion Air disaster in Indonesia in October, in which 189 people died.

Both crashes were linked to the Boeing 737 Max's Manoeuvring Characteristics Augmentation System - a new feature on the aircraft which was designed to improve the handling of the plane and to stop it pitching up at too high an angle. 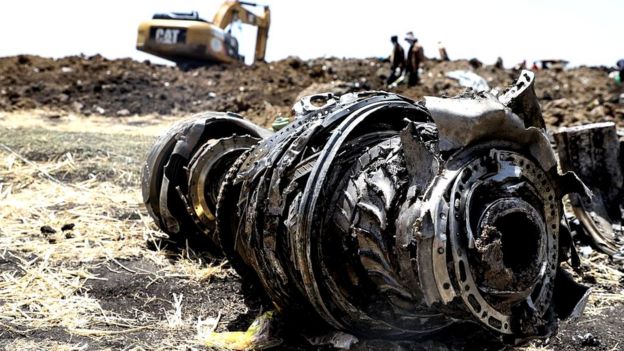 The Ethiopian Airlines crash killed all 157 people on board

The company also said it had completed associated simulator testing on the upgraded system and had developed training and education materials that are now being reviewed by the FAA, global regulators and its airline customers.

The FAA said earlier this week that it would hold a meeting on 23 May with air regulators from around the world to provide an update on reviews of Boeing's software fix and new pilot training.

Aviation safety analyst Todd Curtis told the BBC that the US regulator was not the only one that Boeing had to satisfy.

"You also have other national authorities in Canada and the United Kingdom and in Europe who have said they would like to have their own tests and their own evaluation before certifying this aircraft for flight," he said.

"It's unclear whether or not there will be approval, let's say from Canada, to have this aircraft fly, which could directly affect US carriers, since many routes - even domestic US routes - overfly Canadian airspace.

"If the authorities there don't certify the 737 Max, they'll have to avoid that airspace."

Pilots are expected to undergo extra training on the new system once it receives certification. Mr Curtis said it would take a lot to convince them and other flight crew members that the aircraft was safe.

"They probably will have a fairly high bar to be satisfied before they'll give the seal of approval, as it were, that the aircraft is safe to fly," he said.

ByteDance in talks for investments in TikTok

China to meet US to on WeChat,TikTok

Microsoft and Sony in streaming deal
Previous Item
NEXT

The doctor who invented 18 medical devices
Next Item