Nature's language is being hijacked by technology

"Apple", "tweet", "cloud", "stream" - words that once conjured vivid visions of the countryside are now synonymous with our technological world.

And, a National Trust study suggests, just 1% of uses of the word "tweet" in conversation now refer to birdsong.

One in four parents and grandparents surveyed worried about children losing the original natural meanings of words.

"A lot of new tech is abstract and difficult to understand, which makes it ripe for metaphor," Dr Robbie Love, a linguistics fellow at the University of Leeds, who conducted the study, told BBC News.

And "simple and vivid" words helped to "express something harder to explain".

"It makes it easy for people to talk about tech they perhaps don't understand themselves," he said.

"Stream nicely describes the idea of information flowing into our devices - and without the word, it would be hard to describe this complex process."

The study used software to search through two databases of language transcribed from conversations. The first, from the 1990s, comprises five million words and the second, from the 2010s, 12 million.

Original uses of the word "cloud" dropped by nearly a quarter, with children's conversation switching away from the natural meanings of words in their vocabulary from about the age of 10.

"These words are so well known and common across language but also can be adapted in this rich way," said Dr Love.

"We can see a cloud hanging above us, while cloud computing is harder to fathom."

"We could drink a 'can' of lemonade or 'can' play the piano, for example", he said. 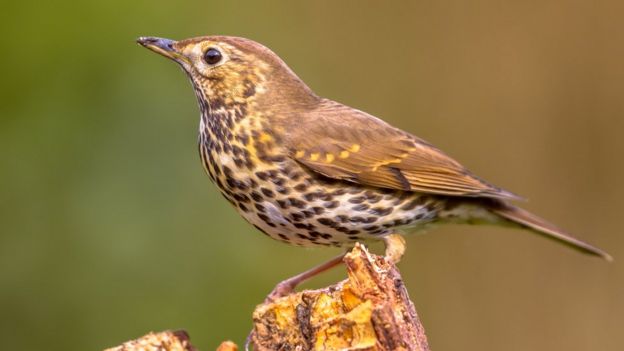 Original uses of words such as "tweet" have fallen to 1%

"Brands that have adopted names from nature, such as Apple, The North Face, Amazon, Nectar et cetera, all have one thing in common, they are aligning their product with something that feels familiar and feels good," said Gerry Acari, managing director of the branding agency Vivid Creative.

"It's a fantastic strategy to reach out to worldwide audiences - potentially bridging all languages and cultures - without requiring translation."

And some, such as "bumblebee", disappeared altogether.

National Trust's regional director for the Midlands, Andy Beer, said: "As a nation we are losing our connection with nature.

"Nature connection isn't just about playing outside, it means using all the senses - actively noticing nature, such as the way gorse growing wild by the coast can smell like coconut, how fog in the autumn can cling to your hair, how a spider web can sparkle on a dewy morning.."

Mr Beer said helping children spend more time in nature "isn't about 'teaching' kids or just getting them to observe - it's about helping them think, feel and relate to nature, doing things that really help them connect".

Bumble is planning to expand further

Primitives turns your wallet into a network

Actiondesk ; a tool that works with live data