One day after releasing the final beta of Android Q, Google is making its most direct case yet for why Q’s new gesture navigation controls are an improvement over what came before. The Verge reported on the company’s reasoning earlier today, and now Google has posted a more thorough explanation to its Android Developer’s Blog. “By moving to a gesture model for system navigation, we can provide more of the screen to apps to enable a more immersive experience,” wrote Android UI product managers Allen Huang and Rohan Shah.

No one is arguing that benefit, but the trouble Google has run into is with Android’s “back” function and figuring out the best way of preserving it with gestures — and making that solution feel second nature to the end user. “We prioritized this goal above other less frequent navigation such as drawers and recents,” Huang and Shah wrote.

“We started with research to understand how users held their phones, what typical reach looked like, and what parts of the phone users used the most. From there, we built many prototypes that we tested across axes like desirability, speed-of-use, ergonomics, and more,” they said. “And we put our ultimate design through a range of studies — how quickly users learned the system, how quickly users got used to the system, how users felt about it.”

Below is a heat map for the areas of a phone that users could “comfortably” perform gestures when using their device one-handed. As you can see, it makes a good argument for moving “back” to the sides of the phone, as Google has done in Android Q: 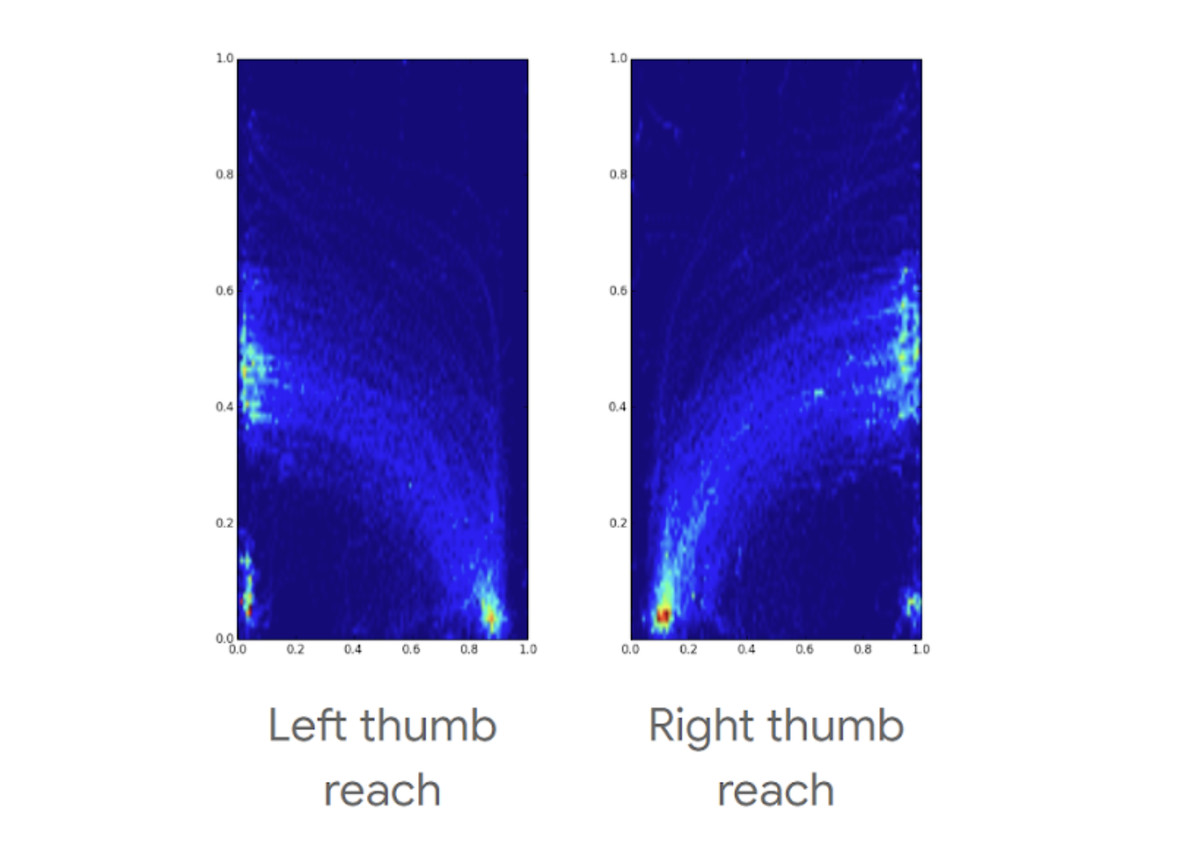 Google acknowledges that the iPhone-like gesture system has “come at the cost of being able to quickly access overview/recent apps.” Swiping up and holding is slower than tapping a button. But the company says that Android users pull up the multitasking view half as often as they go to the home screen.

The most interesting tidbit to me is this: users actually prefer the ergonomics of the traditional three-button Android navigation that was in place for years before Google switched things up (on the Pixel at least) last year with Android P. The buttons get a rating of 5.78 in ergonomics versus 5.39 for the Android Q gestures. 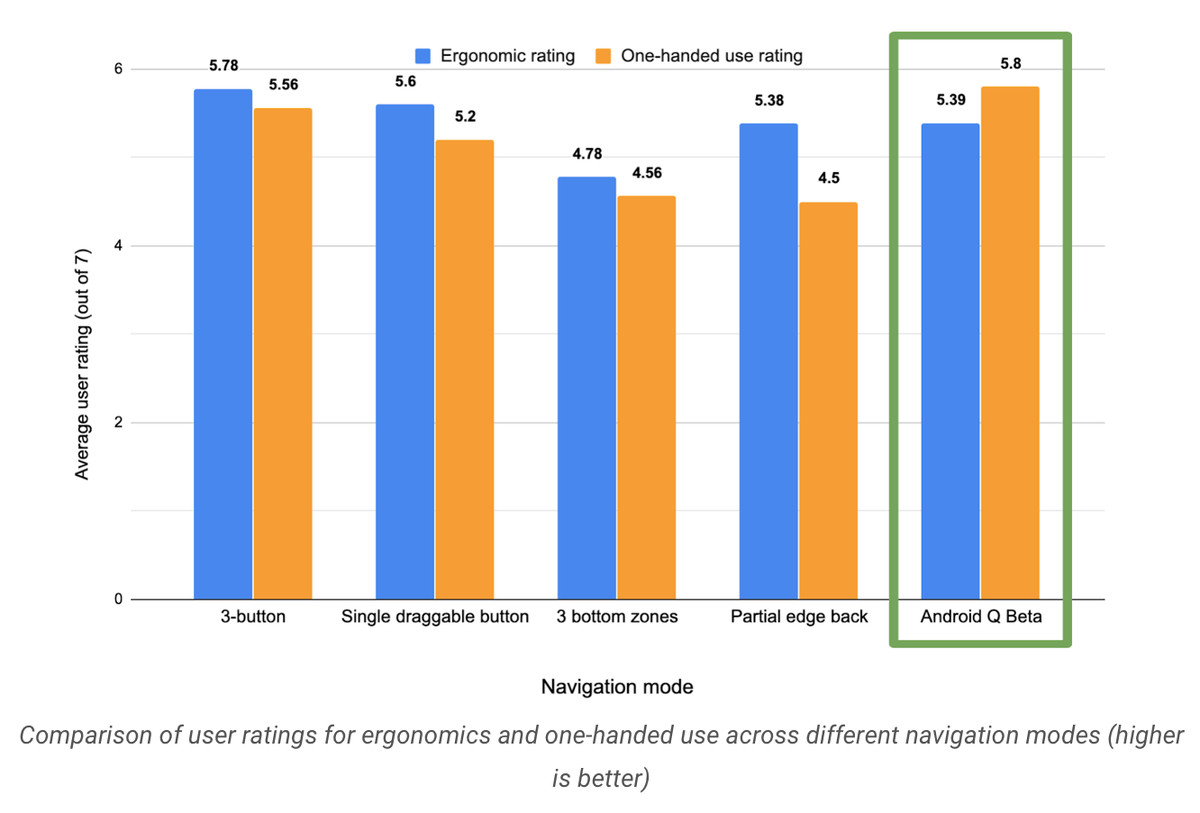 But on the flip side, users consider gestures as the better approach for one-handed phone interactions. And Google’s data shows that the Android Q-style navigation helps people complete tasks faster than any other method, even if some people need some time to get the hang of it:

Beyond drawers, gestures are a big change for people and it took on average 1 - 3 days to adapt - in particular, users struggled with patterns like swiping right or left on a carousel and triggering Back.

In qualitative studies, we found that after an initial break-in period of 1 - 3 days, users became fluent and could consistently distinguish between these two gestures. The majority of users did not want to switch back to 3 button nav (even though that remains an option). 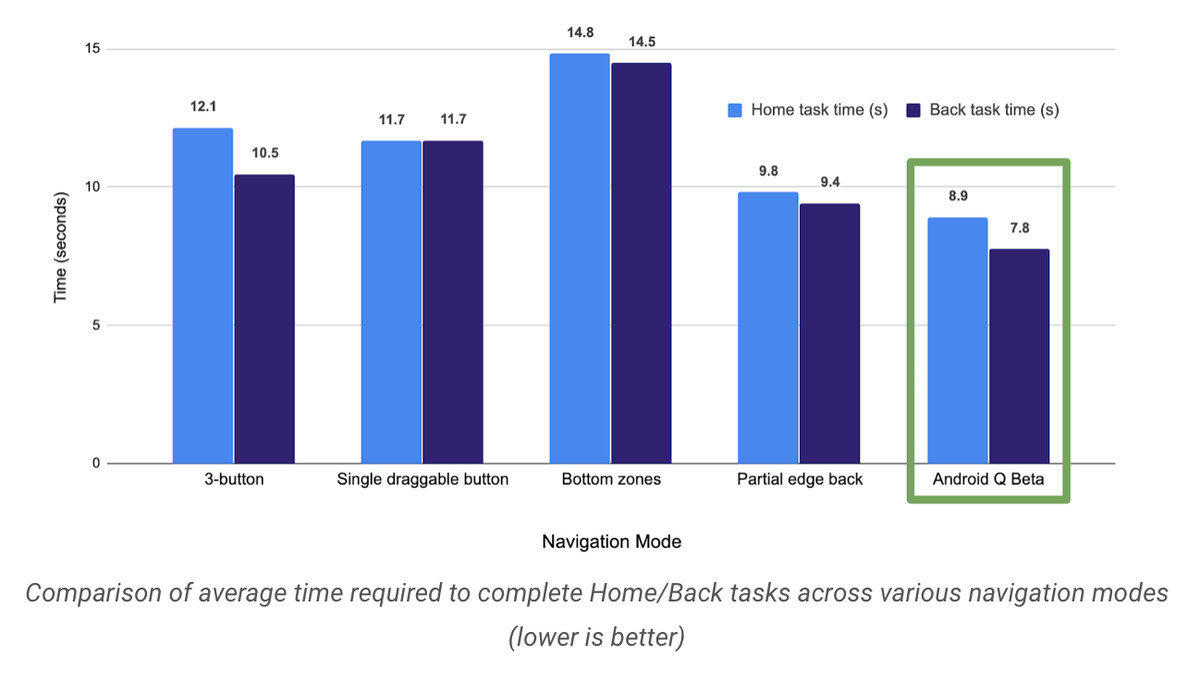 Google found that people used the back function less frequently during those first days of trying out Android Q and familiarizing themselves with it. “After that period, the average number of back presses [per day] ends up being the same as three-button and our P navigation.”

So, Google’s ultimate decision was to move forward with the gesture navigation. And to avoid fragmentation and phones from one manufacturer behaving differently than those from another, the company has confirmed that major Android phone makers including Samsung, LG, OnePlus, Motorola, Xiaomi, HMD Global, and Oppo have all agreed to include Google’s new system as the default on devices that ship with Android Q.

But Google also made clear that customers will have the option of sticking with Android’s classic three-button navigation bar in Android Q if they so choose. The choice isn’t just something that’s there for the beta; it’s going to be present in the full release. And after forcing Pixel 3 owners into using gestures, Google will extend the same choose-your-own-navigation to them as well.

Google’s post acknowledges that gesture navigation has “proliferated” over the last several years. No, the company didn’t mention the iPhone X, but it did give a nod to the Palm Pre for leading the way.

A look at the Morphie Wireless charger
Previous Item
NEXT