Huawei has launched its latest smartphones without many of the apps typically pre-installed on Android handsets.

The Mate 30 and Mate 30 Pro both lack YouTube, Google Maps and Gmail among other software.

They also do not feature Google's Play Store, which is the normal way users outside China install third-party software on to Android 10 phones.

To address this, Huawei has pre-loaded new alternative apps of its own.

A spokesman for the Chinese firm told the BBC that Facebook, Instagram and WhatsApp would all be available via Huawei's own store, called the Huawei App Gallery.

He added that there would also be a way to "side-load" Google's apps onto the handsets and that phone store staff would advise customers how to do that, although they might not run as smoothly as normal. 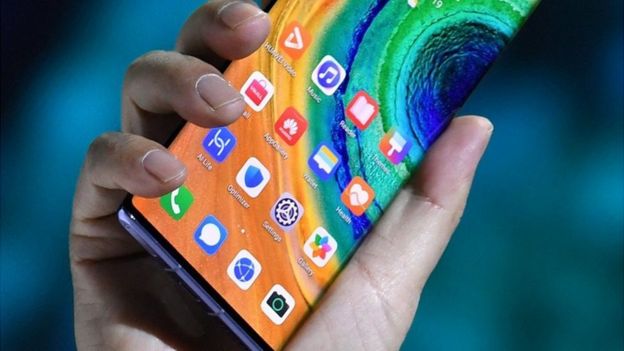 The issue was not addressed until about 90 minutes into the company's launch event in Munich, Germany, and then only briefly.

"Today you know because of the US ban... this phone cannot pre-install the GMS [Google Mobile Services] core," explained the firm's consumer devices chief Richard Yu.

"It forced us to use the HMS [Huawei Mobile Services] core."

He added that the firm had set aside $1bn (£801m) to encourage developers to make their apps compatible, and said more than 45,000 apps had already integrated the firm's technology. But he did not name any of them.

"The hardware is very impressive and differentiating [and] caters to Huawei's strengths," commented Bryan Ma from the market research firm IDC.

"But it's not enough to offset the lack of Google services aside from a few die-hard [customers] who have the patience to side-load and tolerate possible issues.

"Maybe they're just trying to ride it out in the hope that they eventually get access to those Google services later."

One invitee to the launch has tweeted videos showing two of Google's services refusing to work on the Mate 30.

Huawei was the world's second bestselling smartphone brand in the past year, behind Samsung.

Mr Yu said that the company had experienced 26% growth in demand for its smartphones over the January-to-August period, compared to the same eight months in 2018. He did not specify if the figure referred to sales or shipments.

However, analysts suggest sales have started to suffer in Europe after the US added Huawei to a blacklist that prevents many companies from providing the Chinese company with their latest tech. 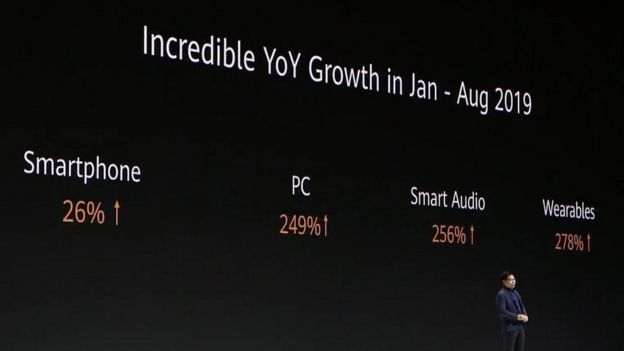 "Having spent billions of dollars over the last 10 years building its brand on a worldwide basis and in key markets like Western Europe, not being able to have Google's full support on its flagship phones is a massive blow," commented Ben Wood from the CCS Insight consultancy.

"Although there may be some ways to work around the restriction, it's going to be very, very difficult to get people to embrace the phones, because they'll be very concerned that they're missing apps they rely on every day."

The issue should not affect sales in China, where the company has a strong lead over its rivals.

Customers there do not use the Play Store and many of Google's services are blocked.

Huawei is hoping some of the devices' other features will encourage consumers to overlook the inconvenience they will face in working around the US trade ban.

The phones are being billed as the world's first "second generation" 5G handsets, promising greater power efficiency and thus longer battery life than other models on the market, as well as the potential for faster internet speeds.

Mr Yu claimed they can download data 50% faster than Samsung's Note 10+ 5G, and 25 times faster than the fastest 4G phones.

However, this will be dependent on networks providing a strong enough signal. Although all the UK's providers will offer 5G services by the end of 2019, it will likely be years before coverage approaches that of 4G.

In addition, the larger Pro model now features four cameras on its rear.

The smaller standard model features the same "super-sensing" camera, as well as a 16MP wide-angle version and an 8MP telephoto component for portraits. 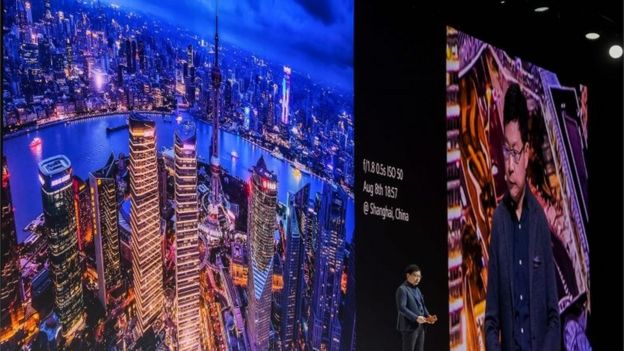 Huawei has long sought to market its smartphones as having superior imaging technology to its rivals.

But in this case, analysts suggest it will be a difficult pitch.

"No question Huawei packed a lot of features into the Mate 30 and Mate 30 Pro and their on-stage performance always looks impressive," commented Carolina Milanesi, an analyst at Creative Strategies.

"But how many buyers outside of China will overlook the lack of Google services?"

The company also unveiled Huawei Vision - a smart TV with a pop-up camera that can be used to make video calls and get feedback from a fitness exercise app, as well as a new smartwatch and wireless ear buds.

Disney+ grows to over 60.5m subscribers