Coronavirus: Should the UK use drones to disinfect public spaces?

An XAG drone flown over a children's play park in China

A group of drone experts is calling on the UK government to relax regulations on chemical spraying from the air during the coronavirus pandemic.

It wants to train drone pilots from the emergency services to spray public areas with disinfectant.

It has been done in China and India - but aerial spraying is largely banned in Europe.

The drones can cover large areas - but there is debate around whether the method is effective.

The Department of Health and Social Care said there were no plans to disinfect outside on a large scale.

"The expert advice is that disinfecting outdoor spaces would not be an effective use of resources," a spokesman said.

"We want to focus our efforts and resources on measures which have been recommended by scientific experts to have the most benefit in protecting the NHS and saving lives."

At the moment, Public Health England advises decontamination only where there has been a possible or confirmed case of the virus.

The Civil Aviation Authority, which oversees drone flight safety, said it was not involved in the decision. 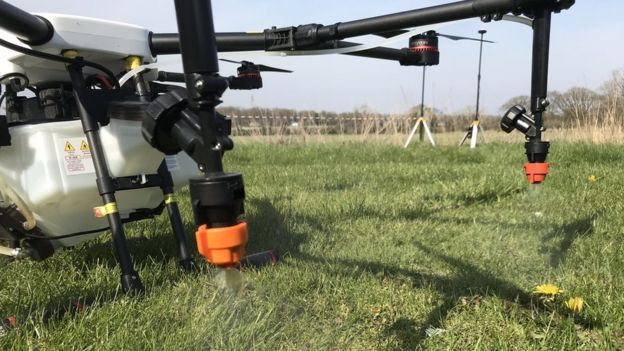 Drone pilots would be more protected than people walking the streets or driving vans with spray equipment, because they would be further away, said Jonathan Gill, from Harper Adams University, in Shropshire, who has spent four years researching spray drones used on farm crops in several countries outside of Europe.

"The spray drones would keep people away from dull, dirty, dangerous jobs," he said.

The disinfectant would be likely to drift from its target and travel further than intended, he said, but other forms of distributing disinfectant would do the same and specialists had calculated the best type of nozzle and droplet size to target hard surfaces.

"Doing something is better than doing nothing," he added.

Chinese Investment Connections director Robert Pearson, who has been working with Chinese company XAG, which says its drones disinfected over 902 sq km (350 square miles) in 20 provinces of China, said: "It's not one solution - but it's an important part of the arsenal." 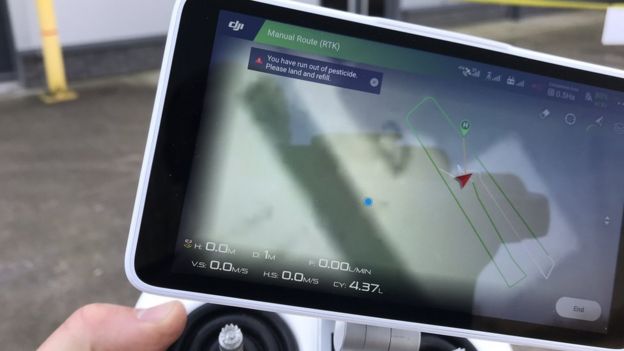 Last month, DJI announced it had adapted its agricultural drones to spray disinfectant over 3 sq km in the city of Shenzhen, including "factories, residential areas, hospitals, and waste treatment plants".

But this month, a spokesman told BBC News: "The effectiveness of using drones for spraying disinfectant is still being tested".

And it appears from a note on its blog the company has stopped doing it.

"DJI will continue to work with professionals in the medical and scientific community to offer the most effective form of assistance it can provide," it said.

And crashes and malfunctions had to be taken into account, as well as the relatively short battery life between charges.

"All our legislation is about the prevention of failure," he said.

"However, now people are working the numbers and saying, 'Is the danger of flying a drone over a public park greater than the danger of not doing it?'

"In times of crisis, people's attitudes to technology completely transform."

UK government defends PM's use of Zoom
Previous Item
NEXT