The Bank of Ghana (BoG) says it will from next year place a temporary ban on the issuance of licences to new universal banks, savings and loans companies or microfinance institutions.

“The central bank is considering not licensing new universal banks or savings and loans companies or microfinance institutions in the country next year as we implement the recapitalisation process,” the Governor of BoG, Dr Ernest Addison, said at the launch of The BEIGE Bank (TBB) in Accra last Friday.

He explained that the measure would help facilitate the full implementation of the recapitalisation process and also ensure solvency of banks and stability in the banking industry by the end of the reforms.

Consequently, he said, the BoG would also introduce a new licensing regime to enable the financial services sector to deliver a strong and well-capitalised financial system that was positioned to support the government’s transformational agenda.

Dr Addison said the measures were aimed at rationalising and making the country’s banking industry efficient.

“As we implement the recapitalisation of the existing banks, we shall not allow potentially insolvent banks to enter the industry. We need to manage entry to ensure that down the line we do not manage the exit of banks as we did this year,” he said.

The central bank in September this year formally directed banks in the country to recapitalise to GH¢400 million, equivalent to about $100 million.

The existing banks have until December 2018 to raise the amount, which represents a 33.3 per cent increase from the current minimum capital of GH¢120 million in line with banks and Specialised Deposit-Taking Institutions Act, 2016 (Act 930).

Dr Addison said all the banks had submitted their feasible recapitalisation plans by the end of the November 2017 deadline.

As a result, the Governor said the central bank would begin the implementation of key pillars of Basel two and Basel three framework of the banking supervision next year to enhance the quality of capital to reposition banks to withstand volatility and unexpected losses associated with operational risk. 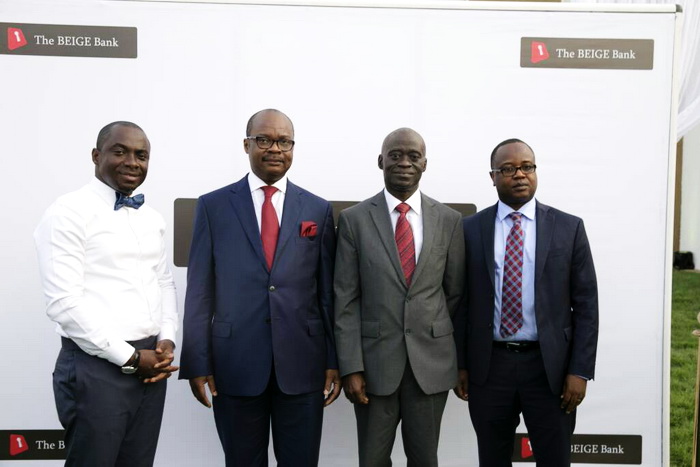 The governor commended The BEIGE Bank for creating a niche market in the SME space because the government also intended to use the private sector as an engine of economic development.

He observed that BEIGE was entering the universal banking space at the time when the banking industry was undergoing comprehensive reforms, including recapitalisation and re-strategising, to build strong and efficient banks to support a fast growing economy.

The BEIGE Bank, which has transformed from a savings and loans company, started a little over 10 years ago. With a strategy to become not only a universal bank, but a one-stop shop for financial services, The BEIGE Bank becomes the 35th licensed universal bank in the country.

With a current staff strength of over 2,000, BEIGE Bank is beginning operations with 25 business offices and a clientele base of 700,000 made up of individuals and small and medium enterprises (SMEs) across the country.

The Chief Executive Officer (CEO) of BEIGE, Mr Mike Nyinaku, said: “When we started, our strategic intention was that within 10 years we will have laid the foundation for what will become not just a bank but a universal financial service provider and in 15 years that financial services provider should have a world class appeal,” he said.

“Together our subsidiaries and affiliates have provided direct employment for over 5,000 people. This, however, means that the foundation we are working on is gradually taking shape,” he stated.

Touching on the history of the company, he said BEIGE commenced operations in 2008 with a stated capital of GH¢1 million.

According to him, the company’s application to operate as a savings and loans company was turned down by the BoG, unlike existing players who had been given time to operate and raise capital, as new entrants needed to cough GH¢7 million minimum capital.

For that reason, he said the company operated as a microfinance institution until 2012, when it successfully upgraded as a savings and loans company and today has evolved into a fully fledged bank.

IoD-Gh President on cause of collapse