Ford to cut thousands of jobs in turnaround plan

Carmaker Ford has announced plans for a major shake-up of its operations in the UK and mainland Europe.

It is expected to lead to thousands of job losses across Europe, including the UK, although cuts at its UK factories are not thought to be imminent.

But Ford Europe boss Steven Armstrong said should the UK leave the EU without a negotiated deal, a further review of UK operations would take place.

Ford is now going to talk to unions about measures to reduce costs.

This includes focusing on more profitable models and exiting less profitable markets, to concentrate more in future on electric and hybrid technology.

The firm will also expand its commercial vehicle business, which will be one of three new divisions being created, along with passenger vehicles and imported vehicles.

Ford hopes the changes will enable it to achieve a 6% operating margin in Europe.

The UK's biggest union Unite said it was working closely with Ford to safeguard jobs in the UK and look after the interests of employees.

The union also said it expected the impact of cuts on jobs in the UK to be limited.

Speaking to reporters after the announcement, Mr Armstrong said the firm "needed to address the parts of the business that are unprofitable".

But he said the move had not been forced upon the firm by the UK vote to leave the European Union on 29 March.

He added: "If Brexit goes in the wrong direction and we have a hard Brexit, we would need to look again about what we could do to mitigate the impact of that [in the UK]."

He said potential closure of plants would "not be off the table".

Ford says there will be a "reduction of surplus labour" across all its business functions.

It has not released any figures, as discussions with unions are continuing, but that it could be in "thousands".

Ford operates two engine factories in the UK, at Dagenham, east of London, and Bridgend in Wales, as well as a joint venture with the gearbox manufacturer Getrag on Merseyside. 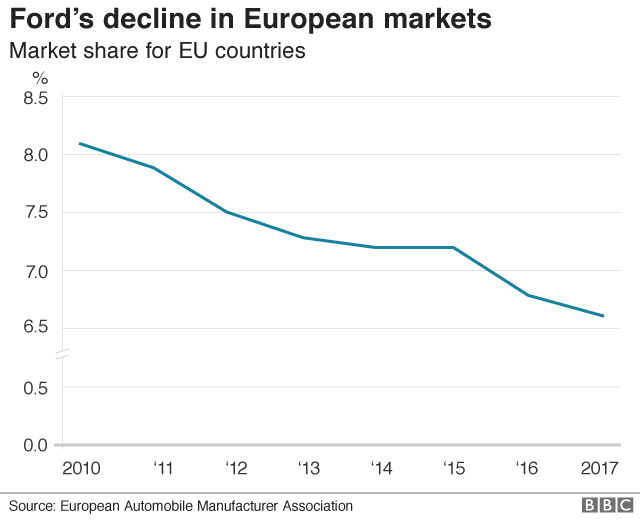 The announcement is likely to renew concerns about the long-term future of the Bridgend plant in particular. It is already due to lose a major contract to build engines for Jaguar Land Rover in 2020.

Profits at Ford of Europe fell 82% last year, in part due to the fall in the value of the pound as a result of uncertainty over Brexit.

It is understood that while this is a preoccupation for the company, it is one of many factors affecting the business, which has been underperforming for years.

The BBC understands that Ford's Dunton Technical Centre in Essex could potentially benefit from new investment in the commercial vehicles business. 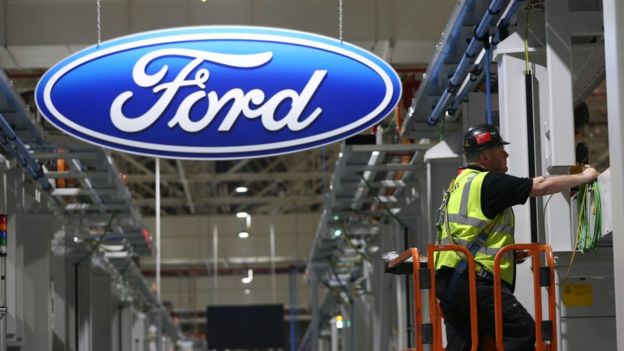 Ford of Europe has 54,000 employees, with 13,000 in the UK. As well as the UK engine plants, it has other operations in Germany, France, Turkey, Spain, Russia, Romania, and Belgium.

As part of the shake-up the firm says it will stop manufacturing automatic transmissions in Bordeaux, France, in August, and will review its operations in Russia,

Mr Armstrong also said the company was in negotiations with staff representatives about potential job cuts at its Saarlouis plant in Germany, where 6,190 staff assemble cars, as the firm considers discontinuing production of its Ford C-Max model.

The news comes as rival Jaguar Land Rover (JLR) is set to announce it is cutting up to 5,000 jobs from its 40,000-strong UK workforce.

Management, marketing and administrative roles are expected to be hardest hit, but some production staff may also be affected.

The layoffs are part of a £2.5bn cost-cutting plan amid what industry insiders have called a "perfect storm".

They mean a downturn in Chinese sales, a slump in diesel sales and concerns about UK competitiveness post-Brexit.

Intrapreneurship as a Tool for Growth

Things the US, China will never agree on
Next Item