The exact figure was not given, but Amazon is the biggest investor in Deliveroo's latest round of fund raising, which in total raised $575m (£450m).

Deliveroo said it would use the money for international expansion, improving its service and to grow its delivery-only kitchens business.

Several existing US investors also contributed to the fund raising.

The amount of capital invested in Deliveroo since it was founded in 2013 now totals more than $1.5bn, and the firm is one of Europe's fastest growing technology companies.

Deliveroo founder and chief executive Will Shu said he was looking forward to working with "such a customer-obsessed organisation" like Amazon.

Amazon said it was attracted by Deliveroo's "innovative technology service".

The backing from Amazon gives Deliveroo a boost against rivals such as JustEat and Uber Eats. 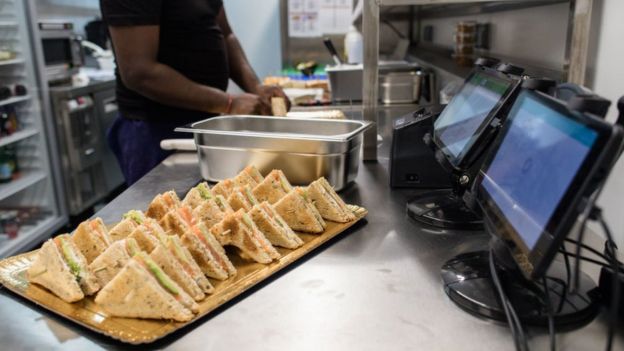 The online retailer briefly had its own UK food delivery venture, Amazon Restaurants UK, which it started in 2016 but closed just two years later.

"They [Amazon] weren't able to compete within the market so they've gone for the buying option instead. They've got the money behind them to do that," Louise Dudley, fund manager at investment firm Hermes, told the BBC's Today programme.

"It [Deliveroo] is not just a food delivery company it's very much a tech company. They have this tech platform that is seen is very attractive. They are able to expand into new areas and think about how people's tastes are evolving and be able to predict what stores will be successful. That predictive growth is very attractive to Amazon".

Amazon had previously been reported to have made approaches to buy Deliveroo outright. Uber also reportedly had talks with Deliveroo over buying it.

It was already a fierce contest - now the battle to dominate the food delivery business in the UK just moved to a whole new level.

In a rare failure Amazon decided last year to pull its Restaurants food service out of a UK market where Deliveroo, Just Eat and Uber Eats were scrapping to be top dog. Now it's put its firepower behind Deliveroo, which was already confident that its technology platform gave it the edge.

The company will now use some of its extra cash to build more of its "super kitchens" expanding its offering beyond traditional restaurants and invest more in machine learning to speed up delivery times.

Whether the market for food deliveries is quite as big as all the firms believe - and whether it stretches far beyond London twenty-somethings - remains to be seen but they all seem prepared to spend big money to win the lion's share.

The question is why did Amazon not just buy the whole business? Perhaps the ecommerce giant wanted to sample a starter before swallowing the whole three course meal.

Deliveroo now operates in more than 100 towns and cities across the UK, but has a much smaller share of the market than rival Just Eat which dominates the food delivery sector.

Just Eat's shares fell 8% in early trading, but analysts at Liberum said that despite the extra funding, Deliveroo was unlikely to become a serious competitor.

"Just Eat's market leading position will be incredibly difficult to overcome, especially given its strength in smaller towns.

"In the UK, it has an estimated 3-4 times greater share than Uber Eats and Deliveroo combined and, crucially, 60%+ of its customers are in small towns where it is effectively the only option for restaurants and where the Uber Eats/Deliveroo model just doesn't work because of the economics," Liberum said. 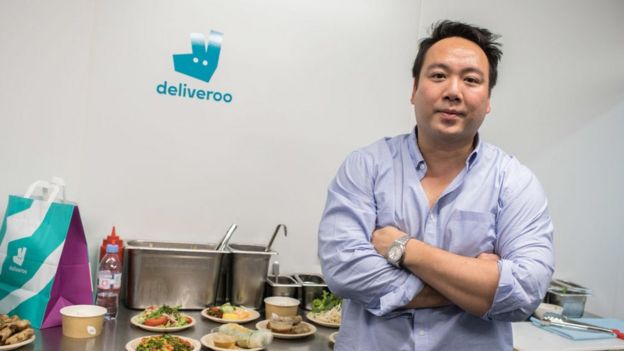 Will Shu co-founded Deliveroo in 2013

Mr Shu came up with the idea for the firm after he moved from New York to London as a banking analyst. He was working long hours and was frustrated by the fact so few restaurants delivered, a service he had used daily in the US.

In the firm's early days, Mr Shu delivered all the food himself on a motorbike, while Greg Orlowski, his co-founder who has since left the business, developed the booking technology from his home in the US. Mr Shu still claims to get on his bike once a week to deliver an order to customers in London, as a way of staying in touch with riders.

Global sales at the firm more than doubled in 2017, jumping to £277m, but its losses continued to increase, doubling to nearly £185m as it invested in global expansion.

The firm uses more than 60,000 couriers - mostly using bikes or moped - to deliver food from restaurants to customers.

Deliveroo does not employ its riders directly, but pays them per delivery.

Last year, a group of 50 UK Deliveroo couriers won a six-figure payout after claiming they had been unlawfully denied holiday and minimum wages.

There are great success stories in Ghna
Previous Item
NEXT