EasyJet's chief executive, Johan Lundgren, has defended his airline's high ticket prices to fly to Madrid for the Champions League final between Tottenham and Liverpool on 1 June.

Football fans complained to BBC Radio 5 live that flights around that date cost £1,000 instead of £250 normally.

But Mr Lundgren said the price was higher than average because there had been an "enormous" surge in demand.

"That is actually how the system works," he said.

Mr Lundgren said 42 million people had flown with the airline over the winter season, with 65% of them paying £50 or less.

"The whole pricing picture is very dynamic," he said, adding that at peak booking times, EasyJet could fill a plane in six seconds.

"That's how quickly this goes and this is how the system reacts."

Mr Lundgren added: "I can understand if people think that the prices are high on this occasion, because it is higher than the average.

"But there's no doubt that this was an occasion where the prices went very high because the demand was enormous."

He maintained that in comparison with other airlines, EasyJet was still offering lower prices, despite the huge increase.

What are the options?

If you want to fly from Liverpool to Madrid on 31 May, it will cost you £750 one-way. There are no flights available on the day of the match itself, while return flights on 2 and 3 June are sold out.

For Spurs fans, EasyJet flights from London Gatwick to Madrid are sold out on 1 June, but seats are still available the day before, at prices ranging from £350 to £750.

All return flights are sold out on 2 June, but evening flights are still available on 3 June, with prices starting at £510.

Seats on early morning flights from London Luton to Madrid on 1 June are selling at £750. Returns on 2 June are sold out, but you could come back on 3 June for £550.

Other airlines are, of course, available. A typical London-to-Madrid economy fare on British Airways on the morning of 1 June will set you back £709, but that price drops to just £46 for an evening flight - which would get you in too late to see the match. 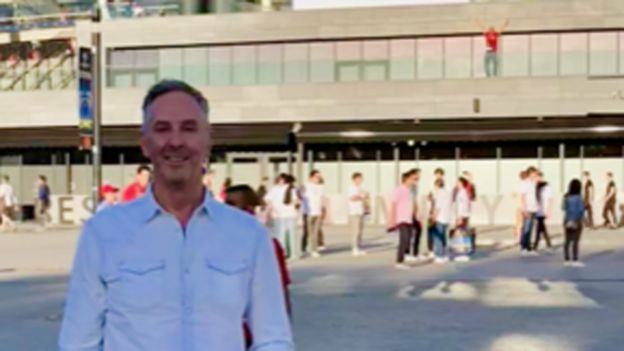 I live in Hong Kong, but I'm going to be in the UK on business. I bought my airline ticket on BA from London Heathrow to Madrid immediately after Liverpool beat Barcelona 4-0 in the second leg of the semi-final. The tickets had already gone up six-fold within a couple of hours, from about £100 to £600 return.

I'm going the day before and I'm coming back the day after, very early in the morning. It was even difficult to get the hotel. It's just an average hotel by the airport, ordinarily €120 a night, and that was €600-plus a night.

We live in a world of shameless greed, but who, if they could, wouldn't take this opportunity to make money? It's solely about supply and demand. I'm lucky in the fact I can even afford this, but I do not envy the Chelsea and Arsenal fans who will travel to Baku for the Europa League final.

Mr Lundgren's comments came after EasyJet reported a loss of £275m in the six months to the end of March, compared with a £68m loss in the same period a year earlier.

The airline said cost per seat had gone up 3.9% due to fuel price increases and the impact of currency movements, while revenue per seat had fallen by 6.3% to £50.71.

Easyjet also said had it suffered from "the impact of drones at Gatwick in December", which it said had cost it £10m.

In April, EasyJet had warned about "weak" summer sales amid Brexit uncertainty.

In its latest results, the carrier said revenue per seat in the second half of the year would be slightly lower.

"This is not helped by the ongoing negative impact of Brexit-related market uncertainty as well as a wider macroeconomic slowdown in Europe," it said.

"Gas is Critical for Africa’s Future