Celebrity chef Jamie Oliver has said he is "saddened" after his restaurant group went into administration, with 1,000 jobs being lost.

The group, which includes the Jamie's Italian chain, Barbecoa and Fifteen, has appointed KPMG as administrators.

In total, 25 restaurants are affected by the move, 22 of which are from the Jamie's Italian chain.

Mr Oliver, who put in £4m cash this year, said: "I appreciate how difficult this is for everyone affected."

Following the appointment of administrators, all but three of the group's 25 eating establishments have closed. Two Jamie's Italian restaurants and Jamie Oliver's Diner at Gatwick Airport will continue to trade in the short term.

"The group had recently undertaken a process to secure additional investment into the business and, since the beginning of this year, Jamie Oliver has made available additional funds of £4m to support the fundraising," said the administrators in a statement.

"However, with no suitable investment forthcoming and in light of the very difficult current trading environment, the directors resolved to appoint administrators."

Jamie Oliver's Fifteen Cornwall at Watergate Bay, which operates under a franchise, is unaffected. The international restaurants trading as Jamie's Italian, Jamie's Pizzeria and Jamie's Deli will also continue to trade as normal.

Mr Oliver added: "I would also like to thank all the customers who have enjoyed and supported us over the last decade, it's been a real pleasure serving you.

We launched Jamie's Italian in 2008 with the intention of positively disrupting mid-market dining in the UK High Street, with great value and much higher quality ingredients, best-in-class animal welfare standards and an amazing team who shared my passion for great food and service. And we did exactly that." 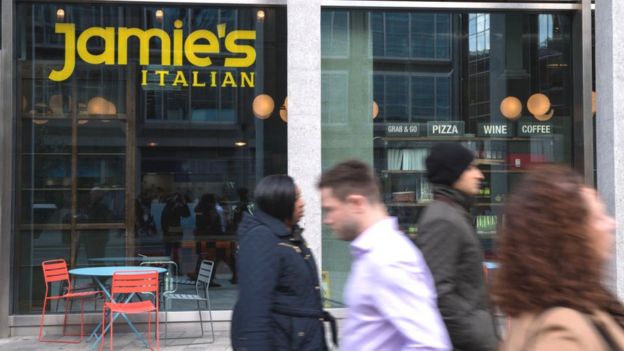 Notices have appeared in the windows of the 22 branches which have already closed.

The Unite union said the development was a "devastating blow for the chain's hardworking and loyal workforce".

"Restaurants are not being helped by the current economic uncertainty, although those businesses like Jamie Oliver's that dashed for expansion in recent years seem particularly precarious. As ever, it is the workers at the restaurant and in the supply chain who bear the heavy cost of boardroom decisions."

The union also asked for assurances assurances that staff will be "protected and paid all the money they're owed, including wages, holiday and redundancy".

Mr Oliver is known for his Naked Chef books and TV shows, broadcast in dozens of countries, after first being shown in the UK 20 years ago.

He has also campaigned for healthier eating, including in school meals. 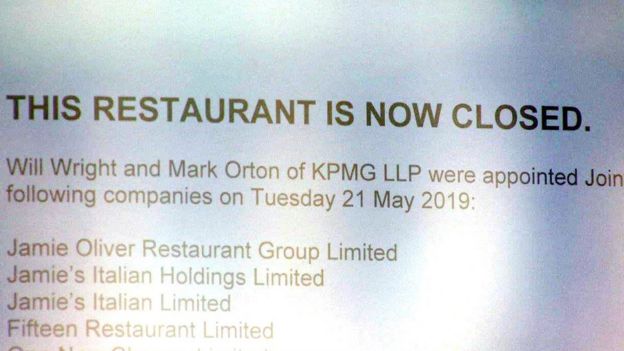 Image caption Closed notices have been posted on a number of outlets, including Jamie's in Glasgow

His chain is the latest victim of a tough trading environment on the UK High Street.

Earlier this year, cafe chain Patisserie Valerie fell into administration, and 70 outlets closed, with the loss of 920 jobs, although 96 shops were saved.

Other mid-market chains that have struggled in recent years have included Byron Burger, Prezzo and Carluccio's.

Mr Oliver's business has faced difficulties over the past two years, with a number of Jamie's Italian and Barbecoa restaurants shutting.

In 2017, he closed the last of his Union Jacks restaurants and also shut his magazine Jamie, which had been running for almost 10 years.

In December of that year the chef also put £3m of his own money into his restaurant businesses. 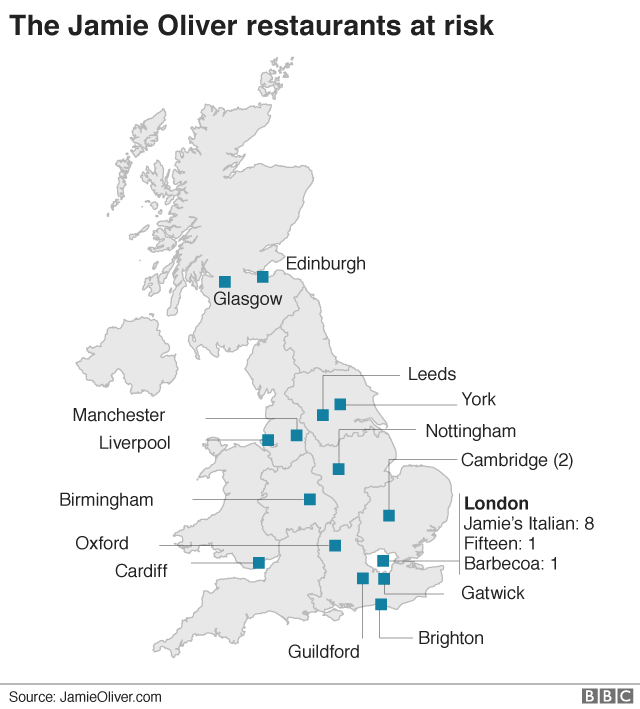 Simon Mydlowski, a partner at law firm Gordons and an expert in the hospitality industry, said Jamie's had failed to keep up with changing trends.

"To be successful in this sector you have to be constantly evolving - from the menus and the drinks choice, to the way you engage with customers."

"Faced with higher rent, rising food prices and increased competition, restaurants need a point of difference - it's no coincidence that smaller brands with the freedom and flexibility to keep things fresh are currently the ones performing well."