US threatens tax on champagne and French cheese

The Trump administration is threatening to slap import taxes on $2.4bn worth of French goods in retaliation for the country's new digital services tax.

The US says the tax penalises firms like Google, Amazon and Facebook, and is proposing to hit back with tariffs of up to 100% on products including cheese, champagne and handbags.

The digital tax is designed to prevent tech firms from dodging taxes.

"In case of new American sanctions, the European Union would be ready to riposte," the finance minister told French radio on Tuesday.

On Monday, US Trade Representative (USTR) Robert Lighthizer said the potential tariffs on French goods were intended to deter other countries from taking similar steps.

The items that could face tariffs includes champagne and sparkling wine, Roquefort and other cheeses, make-up, handbags, and homeware such as porcelain and bone china..

Mr Lighthizer said the tariff proposal "sends a clear signal that the United States will take action against digital tax regimes that discriminate or otherwise impose undue burdens on US companies".

Before the tariffs are confirmed, there will now be what the US called a period for public comment, including a hearing in Washington in January.

The French tax, condemned by US tech firms, is designed to prevent them avoiding taxes by putting headquarters in low-tax European countries. It imposes a 3% tax on any digital company with revenue of more than €750m ($850m; £670m) - of which at least €25m is generated in France.

But the US says the law is inconsistent with international tax norms and "unusually burdensome" for US tech firms. Mr Lighthizer said the US was exploring opening investigations into similar laws in Austria, Italy and Turkey. The UK has also taken steps towards a tech tax.

"The USTR is focused on countering the growing protectionism of EU member states, which unfairly targets US companies, whether through digital services taxes or other efforts that target leading US digital services companies," he said.

France has long argued that taxes should be based on digital activity, not just where firms have their headquarters. The tax will go into effect retroactively from early 2019 and is expected to raise about €400m this year.

About 30 companies are expected to pay it, mostly US firms such as Alphabet, Apple, Facebook, Amazon and Microsoft. Amazon has already responded by raising fees for French businesses by 3%. 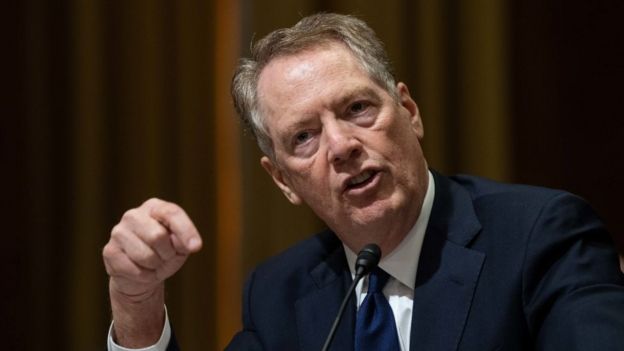 During the summer, President Donald Trump threatened to tax French wine over the issue - a plan that the French agriculture minister dismissed as "completely moronic".

But some US business lobby groups had warned against tariffs because of fears of escalating another trade fight, despite their opposition to the French law.

The US Chamber of Commerce, for example, said tariffs "may elicit additional rounds of retaliatory measures that represent a substantial risk to US economic growth and job creation".

This expected retaliation from the US could make troubling reading for the UK party leaders.

Labour Party leader Jeremy Corbyn's flagship election pledge - to give every home and business in the UK free full-fibre broadband by 2030 - was to be funded, at least in part, by a tax on "multinationals". In the party's press release about the plans last month, "Amazon, Facebook and Google" were mentioned specifically.

Prime Minister Boris Johnson has also backed the idea, calling out the so-called "FAANG" stocks - Facebook, Apple, Amazon, Netflix and Google - as paying "virtually nothing". The Tory manifesto pledges its own Digital Services Tax to fund improvements in broadband infrastructure, among other things.

Both leaders are capitalising on the growing momentum in Europe to tax tech firms based on their sales in a country - rather than profits, which are often funnelled through counties with a lower tax rate, such as Ireland.

But while promising a "Google tax" sounds great on the campaign trail, it only strengthens the view in Washington that American success stories are being unfairly targeted. And the move today suggests the US is ready to start fighting back.

Here's what might happen next: France has said it would drop its digital tax if Europe could, as a bloc, come up with an alternative that's consistent across the Union; a strength-in-numbers move that would be more difficult for the US to counteract. But the UK, post-Brexit, would be on its own - and needs to stay in Washington's good graces.

Financial Inclusion in the wake of COVID-19