Speaking at the launch, which was done online due to the Coronavirus outbreak, Dr. Bawumia described the digital payment innovation as a game changer in the government's quest to transform Ghana into a cashless society. 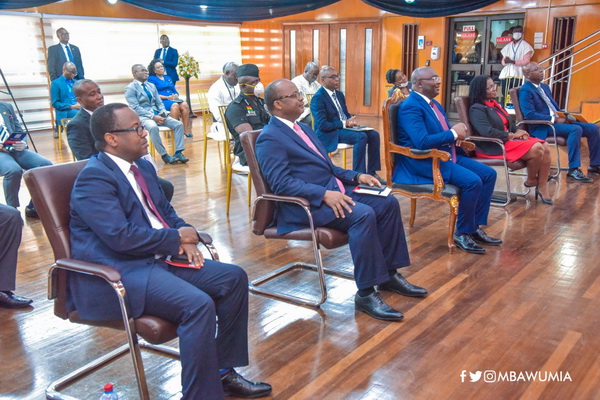 The universal QR Code payment system allows a customer to make payment for goods and services to a merchant from a mobile wallet or a bank account directly from a mobile phone.

The Vice President said in spite of the Bank of Ghana's efforts which have led to the implementation of mobile money and other digital payment options, many merchants and customers were still reluctant to make or receive payments digitally due to many factors, including the cost of point of sale devices, processing fees and card acceptance complexities.

"Even for merchants that accept electronic payments, there is no interoperability across the different banks or across the different telcos. If there is a merchant that has been acquired by Vodafone for example, then an MTN customer is not able to use their mobile account to pay that merchant. Also if Ecobank has acquired a merchant, a GCB customer cannot use the Ecobank terminal to pay from their GCB account. So there is no interoperability," the Vice President noted.

He was however optimistic that the introduction of the QR code system, which doesn't require the purchase of a point of sale device or attract huge charges, will be embraced by merchants and customers, and transform the economy into a cashless one.

"Our goal is to make a secure, convenient and low cost financial service available to the vast majority of people and to solve the pain point of traditional financial institutions," he said.

"In China and many parts of Asia, the universal QR code has come as the solution to these problems that I have been talking about."

"The universal QR code will bring about interoperability across the telcos and across all the banks and between the banks and the telcos. They will all be on the same platform and this is the game changer."

"When you go to the merchant with a universal QR Code, as long as you have a bank account from any financial institution or a mobile money account from a telco, you'll be able to pay the merchant regardless of which bank or telco has acquired the merchant or service provider instantly."

"Any merchant can have it so whether you are a chop bar operator, barber, carpenter, musician, mason, shoe shine boy, khebab seller, kofi brokeman seller, market trader, trotro, taxi driver, churches, schools, mosques and even funeral committees for donations, you can get the QR Code. Basically, any business can get a QR Code."

Vice President Bawumia said "We are breaking down the barriers and it is open for everybody to now get the QR code."

"What is very interesting is that any owner of a phone, whether it is a smart phone or a yam phone (feature phone) can use the universal QR code. So it is not limiting people to just smart phones because we have a large number of people who use feature phones or yam phones."

Dr. Bawumia added that thanks to the Bank of Ghana, the QR Code is easy to acquire through several points and urged merchants to acquire one and make their business transactions easier.

"The Bank of Ghana, through Ghipss, has made it possible for the QR Code to be issued to merchants by banks, rural banks, savings and loans companies, telcos and fintechs. So I will urge every merchant to get a QR code from these service providers."

"I expect that the QR codes will be provided at very little or hopefully at no cost at all to the merchants."

The Vice President allayed fears over security of payment, which is normally associated with bank cards and other electronic payment systems. He assured that payment will be secured for both merchants and customers because they will both be involved.

"The issue of security of payment is most critical in building confidence in the payment system. Credit and debit cards have suffered with this. However, mobile payments like the QR codes rank as some of the most secured of all currently available payment options because they require authentication for each transaction," Dr. Bawumia assured.

"So if you go to pay for a good with your phone, once you scan, you have to enter how much you are actually paying the merchant. So there is a lot of security in there."

"I will like to urge every adult to get either a mobile money account or a bank account so that we can get this thing to work."

On the Proxy Pay system, the Vice President explained that bank accounts for individuals and organisations will be given a phone number or an alias, which will be used as proxy to make payments for accounts linked to the number.

“So just like making payments to individual bank accounts, payments can be done through the phone number, similar to mobile money. So you can register an Alias, and have all payments made into your account. No need to memorise account numbers. I’m sure the churches and other large organisations will be delighted with it," Dr. Bawumia explained.

The Vice President commended the Bank of Ghana and other stakeholders for their efforts in making the digital innovation possible.

"Today is a historic day that all Ghanaians should be proud of. We owe today to the Bank of Ghana led by the amazing team of Govornor Ernest Addison, Deputy Governor Maxwell Opoku Afarie and Mrs Elsie Awadzie. And of course, to the management of Ghipss, led by Mr Hadze Hesse."

"Ayekoo to you all, your names will be forever written in the annals of Ghana's economic history."

Could churches double up as banks?

‘Tourism industry will bounce back’

Next admin will promote modern parks

Boost for global response to COVID-19

Use apps to purchase electricity
Next Item