Will Ferrell to star in a film based on Eurovision

Will Ferrell will star in a new film about the Eurovision Song Contest for Netflix.

The film, which will be called Eurovision, will be set at the music competition.

The Anchorman star was at this year's contest and is thought to have been a fan since being introduced to it by his Swedish wife. 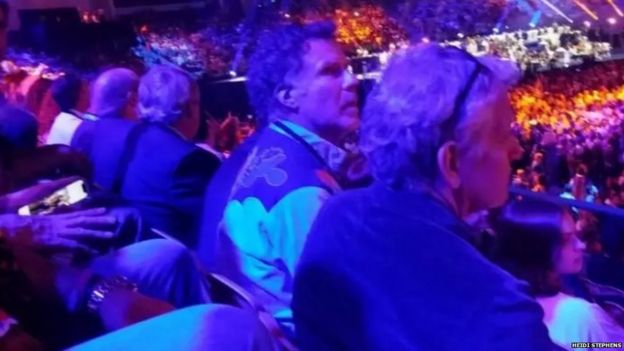 The actor was spotted in the crowd at this year's competition

During his visit to this year's Eurovision, Will Ferrell watched various stages of the competition - and was reportedly given the go-ahead to make the film by the organisers.

He also spent time with some of the contestants.

With Eurovision not being as popular in America as it is around Europe, the move has been seen as an attempt by Netflix to appeal to international subscribers.

The film will be Will Ferrell's second Netflix feature-length production.

He also worked on Ibiza, a comedy starring Gillian Jacobs, which was released last month.

It's not yet known if Will Ferrell will sing in the film but he has sung in films before, including a rendition of Por Ti Volare in Step Brothers.

He also sang in several skits during his time as a cast member on Saturday Night Live.

Elton John reveals he has COVID

Was Hefner a champion of women?

Dede,BBN among Ghana's most watched

A first look at 'The Proud Family'

Cardi B wins in defamation case

Heroes, on screen and off, win big
Next Item