Felicity Huffman was silent as she left court

US actress Felicity Huffman has pleaded guilty to fraudulently conspiring to win a college place for her daughter.

In a statement last month, she said she was in "full acceptance" of her guilt.

Prosecutors recommended a four-month prison term and a $20,000 fine. Huffman, 56, was among 50 charged in the college admissions scandal.

The wealthy parents charged in the investigation allegedly paid bribes, had exams altered, and even had their children edited into stock photos to fake sporting talents.

They managed to fraudulently secure spots for the teenagers at elite US universities including Yale, Georgetown and Stanford.

Parents and college athletics coaches were charged in the scheme, but none of the children were indicted.

Huffman did not speak to reporters outside court as she arrived to Monday's hearing holding hands with her brother. 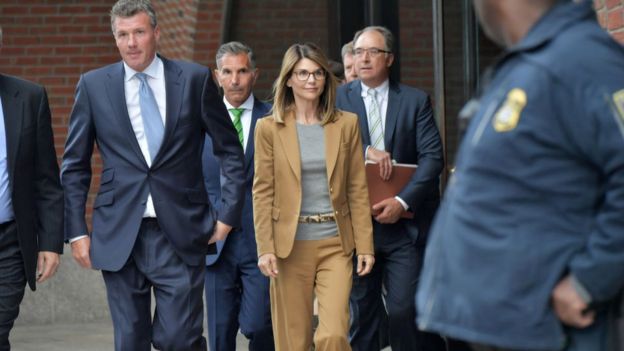 She admitted one count of mail fraud and honest services mail fraud.

The Emmy-winning actress cried while speaking to the judge, according to reporters in the courtroom.

Her plea deal recommendation of four months in prison was at the lower end of sentencing guidelines, which could have carried a custodial term of up to 20 years.

According to court documents, she was secretly recorded by the scam's confessed mastermind, William Singer, after he began co-operating with investigators.

When Sophia's school initially wanted to invigilate as she sat her test, Huffman expressed concern to Singer.

The actress emailed to him, "Ruh Ro!" - the catchphrase of cartoon dog Scooby-Doo when he was in trouble.

Singer arranged so that Sophia could complete the SAT, which is the US college entrance test, elsewhere.

Sophia scored an SAT score of 1420 out of a possible 1600 on the doctored test, about 400 points higher than a preliminary SAT she had taken a year earlier.

The actress made arrangements to cheat a second time, for her younger daughter, before deciding not to do so, according to prosecutors.

Huffman said her daughter was unaware of the cheating, and that she felt "regret and shame" for having "betrayed" her.

She will be sentenced on 13 September.

Last month, Netflix announced it would postpone the release of a movie, Otherhood, starring Huffman that was originally set for release on 26 April. It did not specify a new premiere date.

Though Huffman was among the most high-profile figures indicted, the $15,000 she parted with was among the smallest sums allegedly paid by any of the other parents charged in the scandal, according to court documents.

Lori Loughlin, another Hollywood actress ensnared in the scandal along with her husband, has pleaded not guilty to paying $500,000 in bribes to have their daughters accepted to the University of Southern California as members of the rowing team.

Nine films to look out for
Previous Item
NEXT

Darude's journey from Sandstorm to Tel Aviv
Next Item