Gomez is the second most followed person on Instagram

Actress and singer Selena Gomez says social media has been "terrible" for her generation, and has urged people to set time limits on online activity.

Speaking at the Cannes Film Festival, where she is promoting her new film The Dead Don't Die, the 26-year-old said: "I think our world is going through a lot obviously.

"But for my generation specifically, social media has been terrible."

She claimed many young people were unaware of important news issues.

"It's a useful platform but it does scare me when you see young boys and girls not really aware of the news going on," she added.

"It's selfish - I don't wanna say selfish, that's rude - but it's dangerous for sure."

Gomez who has 150 million Instagram followers, was last year overtaken by footballer Cristiano Ronaldo as the most followed person on the platform, and she has previously taken lengthy breaks from social media. 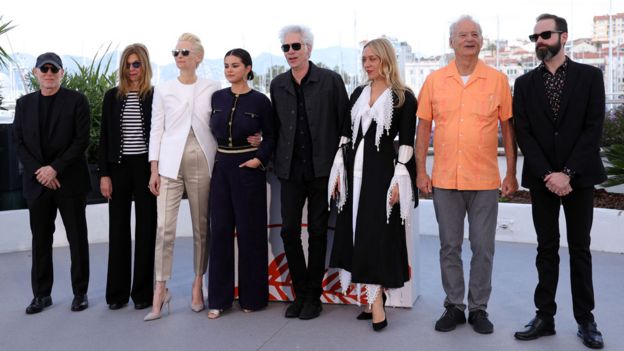 In her new horror-comedy, directed by Jim Jarmusch and co-starring Bill Murray, Adam Driver and Tilda Swinton, Gomez plays a "wifi-obsessed hipster" in the midst of a climate change-induced zombie apocalypse.

While she does post pictures and messages on Instagram and Twitter, Gomez said she tries to do so in a constructive manner, conscious of the dangers of online pressure for many of her young fans.

"I'm very grateful I have the platform in any way, I can still share things I'm passionate about," she said. "I don't take a lot of pointless pictures I like to be intentional with it.

"I see these young girls, devastated with bullying and not being able to have my voice.

"It can be great in moments, but I would careful and give yourself time limits in terms of when you can use it and not."

Director Jarmusch described the actress as "incredibly admirable" with regards to how she uses her celebrity platform.

"She's looked up to by so many people," he said. "She's a remarkable person."

The acclaimed filmmaker confessed he was actually "more of fan of vampires than zombies" but that he used the undead in his new film, which blames fracking for the zombie uprising, "as a metaphor".

He added that he's "with the teenagers" when it comes to being aware of climate change issues - which he says is "not a political issue".

The horror-theme continues later on Wednesday with John Carpenter set to receive the Golden Coach Award at the Directors Fortnight leg of the festival.

Bill Murray, who was constantly joking around with Jarmusch, Gomez and the rest of the cast/reporters gave the photographers a treat by pretending to pose for glamour shots on arrival.

The 68-year-old revealed he's "a better person when working on a film".

"The film is the high point of the week or month or year and my concern for the planet is demonstrated in my working on the film.

"This is how I operate," he added, "this is my little ice flow that I stand on and I hope it doesn't melt."

Adele to release album in Sept

Weinstein : From studio to courtroom

Kofi B's funeral to be held on April 25

Capaldi expected to triumph at Brits

Australia qualify for Eurovision 2019
Next Item