Jessie J on The Voice Kids and surviving fame

For most people, sitting in a big red chair on TV means you're about to be tipped backwards by Graham Norton.

For Jessie J, however, it's the chance to potentially make a significant difference to the career of an aspiring young singer.

She is one of four coaches on the current series of ITV's The Voice Kids, which is airing seven years after she first appeared on its sister show The Voice UK. Jessie sits on the panel alongside Pixie Lott, Danny Jones and Will.I.Am, in a contest where all the competitors are aged seven to 14.

But its third series comes at a time when questions are being raised about how TV contestants are cared for, after the recent deaths of former participants of Love Island and The Jeremy Kyle Show.

Given how young the show's hopefuls are and the size of the audience (over three million viewers a week), The Voice Kids gives children a public platform which could bring them a level of instant fame they're unprepared for.

"Kids that young need to be protected. And they're going to create these kinds of shows, whether I'm involved or not, right? But I want to be as involved as I can be, because I love to be able to have some sort of responsibility with what they're learning and what they're seeing. 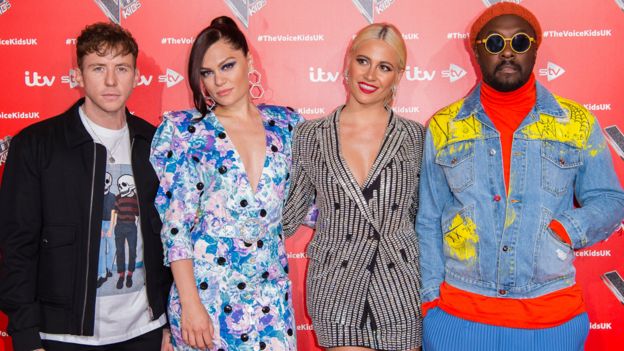 "I made a point of sitting with the producers and the heads of ITV and The Voice Kids, and getting to know everybody - the team, the crew, the chaperones, the parents... and everybody is very, very qualified to look after children."

Notably, the prize on The Voice Kids isn't a record deal. Instead, the winning child receives a £30,000 bursary towards their musical education - and a holiday to Orlando.

The focus on music rather than fame means "there's a different energy," Jessie argues. "And everybody at The Voice Kids loves and appreciates children and supporting them and being there for them emotionally."

Jessie may be in a judging role for the show, but just last year she was competing on a talent show as a contestant.

In early 2018, she won a Chinese TV show called Singer which sees established stars, rather than members of the public, compete. The huge exposure brought Jessie to a sizeable new audience in Asia.

"The show finished in April, and I did an 11-date arena tour in September. So that was a huge achievement," she says. "I felt really lucky to bridge the gap between English culture and Chinese culture and to let them see the side of us that they don't see.

"Every episode had been getting between 200 and 400 million viewers. And that puts in perspective that it's the biggest music show that exists in the world. And I really would love to bring it into the UK.

Jessie J has been in the limelight since 2011, the year that saw her top the BBC Sound Of list and score her first number one with Price Tag. Within a year, she had landed a coaching job on The Voice UK, which was then on BBC One.

But her meteoric rise to fame and instant success had its complications, not least with how her attitude was perceived by viewers.

"The public soon appeared to turn, following headlines of diva behaviour backstage and criticism of her apparently arrogant behaviour on screen," recalled Dan Wootton in The Sun. "Today, she is wise, mature and well aware of how the fame game can chew you up and spit you out."

Reflecting on that period now, Jessie points out: "No-one tells you how to do your first day at work. Whether you're a hairdresser or a plumber, you walk in, and you're scared, and you're awkward, and you say stupid things, and you make mistakes.

"But when you do those things in the limelight, they become something that people hold against you.

"Even watching The Voice Kids, I'm aware there are moments where I know how I can come across. Like, when my face isn't doing anything, but I'm actually really deep in thought and I'm taking a second. But it's read differently and it's really hard to constantly justify.

"A lot of people in the limelight become what people think they are. And I went that way for a little while. Like, there's a very thin line between diva and survival. And at the beginning of my career, I just felt misunderstood... I regret the way I handled certain things, but I can't define myself on the past."

The night she speaks to BBC News, Jessie is playing an intimate gig at Abbey Road Studios. 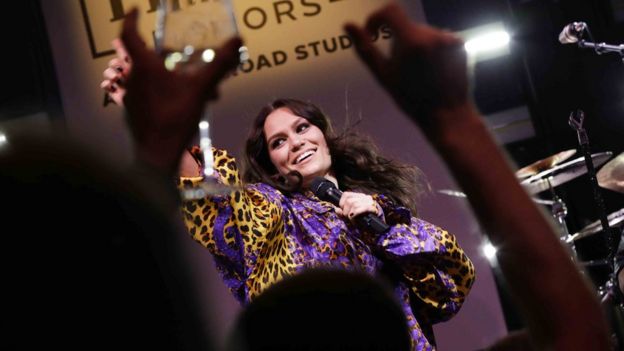 Even though she could fill a much larger venue, she says artists value opportunities to keep things more intimate. The British leg of Madonna's new tour, for example, will see her performing at the London Palladium rather than, say, The O2. "I definitely think there's a crave for connection and a crave for realness," Jessie says.

Her own desire to keep things real with fans recently expanded to sharing quite personal information about her struggles to have children.

She was diagnosed with adenomyosis five years ago - with doctors telling her it was unlikely she'd ever be able to conceive naturally.

The singer has since changed her diet and lifestyle in an attempt to defy the odds.

"There was a song on my album called Four Letter Word, which is about the day I found out about my fertility issues," she explains.

The four letter word in the song's title refers to "baby". In the lyrics, Jessie sings about crying at night, and hating the fact she's not fully in control of her own destiny.

Learn from the legends to stay relevant

Eilish is the big winner at the Grammys

Kyeiwaa remarries in the US

iProspect India to be SEO handler for ZEE5

Elton John, others to perform at Oscars