Tarantino and Peele: What do these two filmmakers have in common?

Quentin Tarantino's latest movie, Once Upon a Time in Hollywood, is only the second original film of 2019 to break $100m (£82.9m) at the US box office.

The recently released film is largely fictional, although it does intertwine real people into the story and uses the Charles Manson murders as a backdrop.

Jordan Peel's horror movie Us is the only other original film so far this year to have made more than $100m.

All the other $100m films are sequels, spin-offs or franchises.

"This is more evidence that Leonardo DiCaprio is the last old-school movie star we've got," wrote Scott Mendelson in Forbes about One Upon a Time in Hollywood's success.

"This is more evidence that Quentin Tarantino is a "butts in the seats" marquee director, especially when he's got big movie stars and/or razzle-dazzle in his corner." 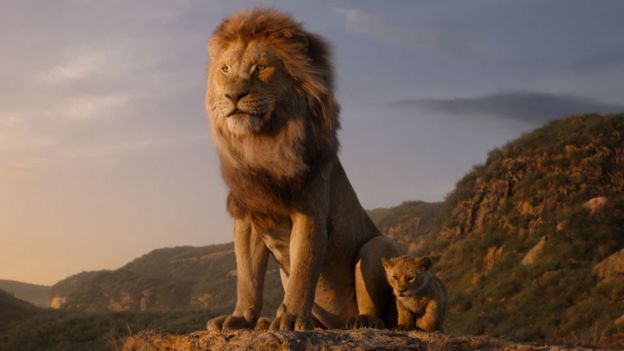 This year's highest-grossing film at the North American box office so far is Avengers: Endgame, having made nearly $858m (£711m) to date.

Disney's Lion King remake is in second spot with $473m (£392m). The top five is rounded out by Captain Marvel, Toy Story 4 and Spider-Man: Far From Home.

It was a similar pattern at the UK and Ireland box office last year, which was dominated by sequels, spin-offs and franchises, led by Avengers: Infinity War, Mamma Mia! Here We Go Again and Incredibles 2.

Meanwhile, the new Lion King's global success has led it to become the most successful animated film in history - depending on whether you classify it as an animation.

Disney bills it as "live action" because it looks realistic, but director Jon Favreau said that was "a bit misleading" because the vast majority of the film was made using computer animation.

Favreau told BBC Click: "Disney even refers to this as a live-action film, which is a bit misleading but tonally correct because we did use those techniques, and hopefully it does feel like something that was actually photographed - even though every shot, with the exception of one, is completely computer generated and every performance is animated."

FDA ban has pushed me out of media