A police officer is appearing on the Nigerian version of Big Brother despite bosses refusing her permission.

The Metropolitan Police said it was carrying out an internal investigation after PC Khafi Kareem went on the programme "without authority".

Scotland Yard said the 29-year-old had been granted unpaid leave for an "unrelated reason".

A spokesperson for Ms Kareem said she would "comment on the matter when she can".

A profile of Ms Kareem on its website reveals she would spend the prize money, reportedly worth 30 million naira (£68,000), on hosting a travel show in Nigeria, as well as investing in charitable causes.

On the show, Ms Kareem and seven other contestants are currently nominated for eviction.

Her social media pages have been promoting posts encouraging viewers to "save her".

The off-duty officer has also posted a statement requesting that the UK's Sun newspaper withdraw an article that alleges she faces the sack for having sex with another contestant on the show.

She said the paper had not contacted her for her side of the story and the article, which she described as a "defamatory outburst", was damaging to her image.

"Khafi's side of the story is deliberately and conveniently omitted… this comes from a repressive culture of shaming and characterising women for their sexual decisions and life choices," a statement on her Twitter feed reads. 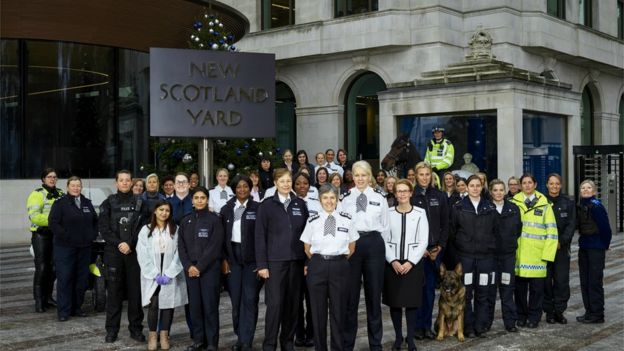 The Met said Ms Kareem had been granted unpaid leave ahead of appearing on the show, but her request to take part in the programme was denied.

A spokesman said: "A PC, attached to the Met's transformation command, requested permission to take part in a reality television entertainment show in Nigeria. Permission was not given.

"The Met is aware that the officer has since appeared on the show without authority.

"The Met does not support the officer's appearance nor does she represent the Met whilst appearing on the show."

The force added that any officer found to have breached police standards of professional behaviour could face misconduct proceedings.

In its statement Africa Magic said: "Police officer Khafi Kareem believes that you can have it all if you believe in yourself.

"She is not only hoping to win the prize money but she wants the exposure that being in Big Brother Naija House brings so that she can do societal good.

"What people don't know about her is that she is secretly talented in spoken word, singing and dancing. She is an Ekiti native who resides in London."

FDA ban has pushed me out of media

What do these 2 films have in common?
Previous Item
NEXT