Oscars 2020: 9 snubs, surprises and snippets you may have missed

This year's Oscar nominations have reignited the row about representation in Hollywood, as well as making some high-profile omissions.

Here are nine of the big talking points from this year's shortlists.

1. 'Congratulations to those men'

That's despite huge support for Greta Gerwig for her scintillating adaptation of Little Women, while there were also hopes for Lulu Wang (The Farewell) and Marielle Heller (A Beautiful Day in the Neighborhood).

It is an extremely competitive category this year, but that won't do much to soothe those who say that the Oscars still aren't doing enough for equality, despite the reforms made to its voting membership in recent years.

After announcing the shortlist, actress Issa Rae pointedly remarked: "Congratulations to all those men." 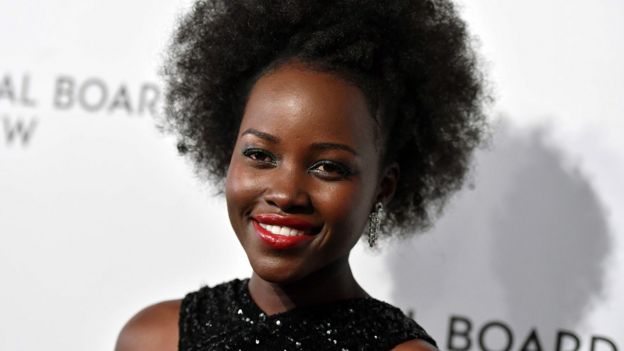 Lupita Nyong'o missed out on a nomination for Us

Nineteen of the 20 acting nominees this year are white - the highest number since the #OscarsSoWhite outcries of 2015 and 2016, when there was a total whitewash.

After three actors of colour won golden statuettes in 2019, this year the main films in the awards race have largely not been those that are telling diverse stories with diverse casts.

The Oscar nominations come a week after the Baftas announced an all-white line-up of acting nominations. Embarrassingly for Bafta, the one black star up for an Oscar is a Brit.

That is Cynthia Erivo, who made her name across the Atlantic on Broadway and is now nominated for playing slave-turned-abolitionist Harriet Tubman in Harriet.

But there is still much unrest that this year's list is not more diverse. There was evidently no space for Lupita Nyong'o for Us, Golden Globe winner Awkwafina for The Farewell, or Eddie Murphy for Dolemite Is My Name, to name but three. In fact, all three films were shut out entirely.

Meanwhile, some are pointing out that there was room to nominate Scarlett Johansson twice, for best actress for Marriage Story and best supporting actress for Jojo Rabbit - her first Oscar nominations.

3. Erivo in line for an EGOT 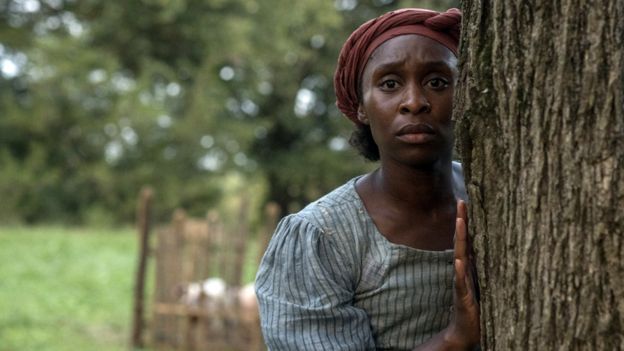 If Erivo does win, she will become only the second black best actress winner - after Halle Berry in 2002.

Not only that, but at 33 she will become the youngest person to become an EGOT - the winner of Emmy, Grammy, Oscar and Tony Awards - according to the Los Angeles Times.

She won the Tony in 2016 for starring in The Color Purple on Broadway, and the Grammy for the show's cast recording. She got a Daytime Emmy for a cast performance on NBC's Today (although the paper points out some people don't count Daytime Emmys towards an EGOT).

And she has two shots at an Oscar this year. As well as being up for best actress, she is nominated for best song for writing Stand Up, which appears in Harriet.

4. Jenny from the block is blocked 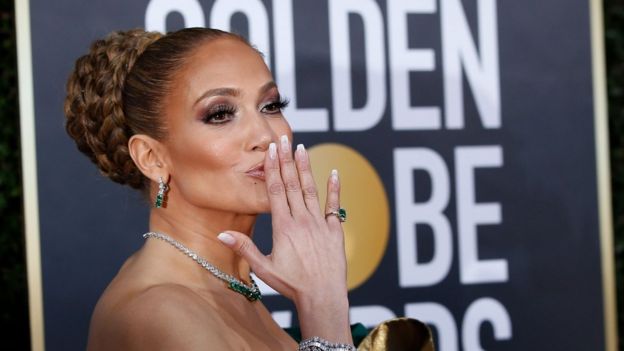 Jennifer Lopez won't make it from "the block" (that's somewhere in the Bronx) to Hollywood Boulevard on Oscars night.

She had been among the favourites to be nominated for best supporting actress for Hustlers, the true story of a ring of women who drugged and swindled rich men at strip clubs.

It would also have been rare recognition for a Latin American performer.

Instead, Kathy Bates - who had been a relative outsider - got the nod for Clint Eastwood's controversial film Richard Jewell. It's her fourth nomination, and her first since 2003.

Still, at least all the praise J-Lo has received for her role probably means she won't have to face the indignity of adding to her tally of 10 nominations for the Golden Raspberries - for the worst films of the year. 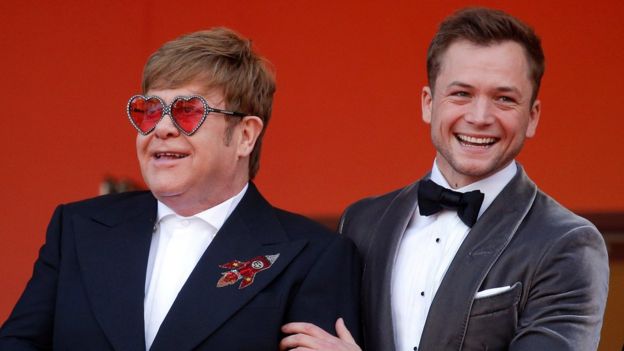 Sir Elton John is nominated, but Taron Egerton is not

But despite winning a Golden Globe last week, the British actor has missed out on an Oscar nod. In fact, it looks like he was edged out by a fellow Welshman, with Jonathan Pryce sneaking in to get his first Oscar nomination at the age of 72 for The Two Popes.

Rocketman got one nomination - for Sir Elton himself and Bernie Taupin for best original song for (I'm Gonna) Love Me Again - but missed out on categories like costume design, make-up and hair, and sound mixing, for which it had been tipped. 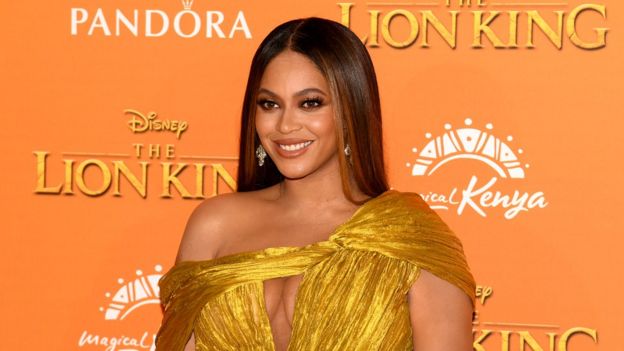 Beyonce at the Lion King premiere

Not only have the Oscars missed the chance to get Jennifer Lopez on the red carpet, but they have also passed up the opportunity to give Beyonce a ticket.

She was thought likely to be in the running for best song for Spirit from The Lion King, but it was not to be.

That category also contained a hope for a song called Glasgow, sung by rising Irish star Jessie Buckley in Wild Rose. That too was shut out. But she'll surely get to the Oscars in an acting capacity before too long. 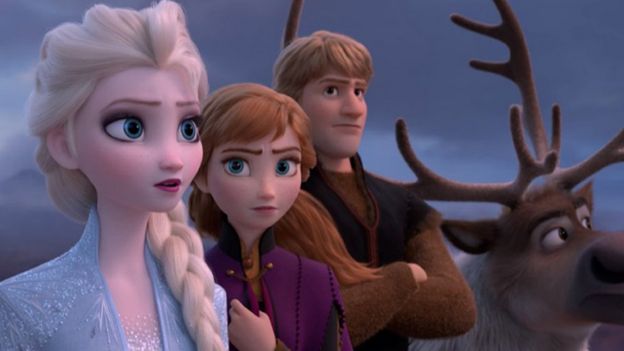 This time, the sequel is nominated for best song, for Into the Unknown - but it's been left out in the cold when it comes to the best animation category.

That category does include Toy Story 4, Missing Link, How to Train Your Dragon: The Hidden World, I Lost My Body and Klaus. The latter is a Netflix Christmas animation, and its inclusion is a big surprise.

8. The return of the Oscar darlings 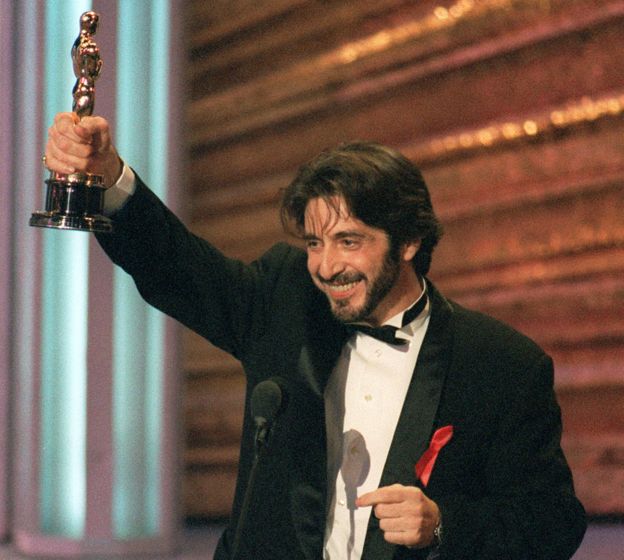 Al Pacino pictured the last time he was nominated for an Oscar, in 1993

A number of past Oscar favourites have been welcomed back into the fold.

Al Pacino now has nine career nominations, with the latest coming for his turn as union king Jimmy Hoffa in Martin Scorsese's The Irishman. It's his first since 1993, when he was up twice (and won for Scent of a Woman).

Sir Anthony Hopkins has his first nomination since 1998, and his fifth overall, for The Two Popes.

Tom Hanks was once Mr Oscar and has won twice, but remarkably his nomination for A Beautiful Day in the Neighborhood is his first nod since 2001 (for Cast Away).

Renee Zellweger is favourite to scoop best actress for playing Judy Garland in Judy - her first nomination since she was shortlisted for three years in a row from 2002-04.

And Charlize Theron is nominated for Bombshell - her first nod since North Country in 2006.

9. A country for old men 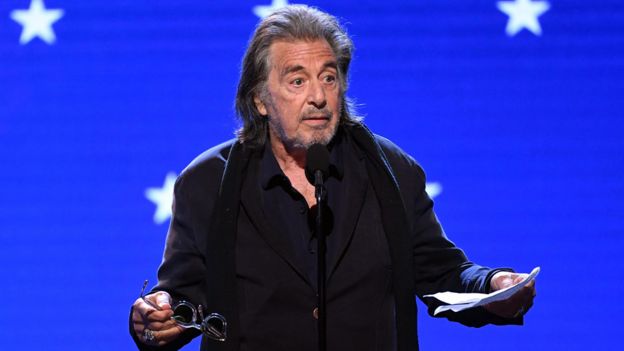 Al Pacino pictured at the Critics' Choice Awards on Sunday

Even across both male acting categories, the average age is 60, whereas the average age of nominated actresses is 40. Which ties in with previous research that Hollywood prefers its female characters to be younger than its men.

A look at 'The Lion King's visual effects
Previous Item
NEXT

Don’t force yourself to be relevant – Coded
Next Item