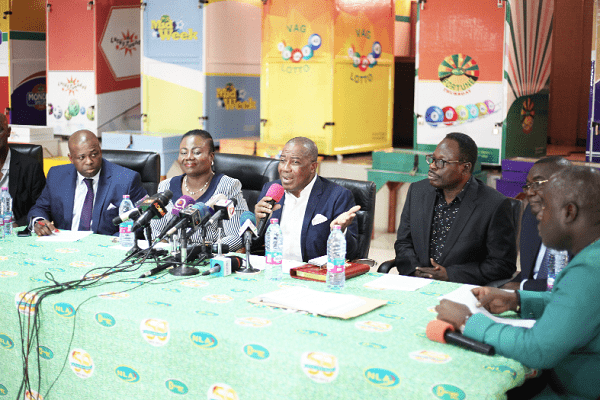 The National Lottery Authority (NLA) has resolved its 30-year-old impasse with private sector operators (PSOs) over the operation of the Veterans Administration Ghana (VAG) lotto.

Consequently, the VAG lotto will be operational, starting this January 2020.

In a joint communique issued at a press conference in Accra on Tuesday, the Director-General of the NLA, Mr Kofi Osei-Ameyaw, said with the resolution of the impasse, the NLA would restore the PSOs who previously held licences issued by VAG under new terms and conditions.

Mr Osei-Ameyaw explained that under the terms of their contract, licensed PSOs would migrate from paper-writing to an I.T platform for effective monitoring, regulation and more revenue mobilisation for the state.

He said the NLA and PSOs would execute two separate contracts, covering the qualified PSOs operation of the VAG Lotto under Act 844, and qualified PSOs participation in NLA 5/90 Fixed Odds Game in accordance with Section 2(4) of Act 722.

Mr Osei-Ameyaw said to ensure the smooth implementation of the road map towards the successful adherence to the signed contracts, the Joint Technical Committee had put in place Joint Dispute Resolution Mechanisms to forestall unilateral breaches, unfavourable media publicity or adverse actions that might create national security concerns.

The Veterans Administration Ghana Act 2012 (Act 844) vests in VAG the mandate to hold lottery, lotto and other games of chance in accordance with The National Lotto Act, 2006 (Act 722), to cater for the welfare of retired personnel of the Ghana Armed Forces.

Pursuant to Section 22 of Act 844, VAG licenced five PSOs to operate the VAG lotto upon agreed terms and conditions which committed the five PSOs to make huge financial commitments towards the operation of the VAG lotto.

Counsel for the PSOs, Dr Ato Koduah, explained that in 2013, NLA went to court to seek interpretation of Section 22 of Act 844 and by the ruling of His Lordship Francis J.Obiri, the court upheld the right of VAG to operate its lotto, but in accordance with the National Lotto Act, 2006 (Act 722), thereby recognising the regulatory function of NLA over lotteries in Ghana.

He indicated that the court process delayed VAG Lotto operations and rendered the five companies unable to operate the VAG Lotto.

The lawyer noted that in July 2018, VAG entered into a Collaboration Agreement with NLA to operate VAG Lotto, pointing out that : “The PSOs were of the view that execution of this collaboration agreement constituted an infringement on their agreement with VAG,” he said.

Mr Koduah explained that in February 2018, the Board of NLA caused an advert to be placed in some newspapers, inviting private sector lotto operators to apply to operate an NLA approved Banker-to-Banker Lotto under Act 722, stressing that “several PSOs responded to the advert, paid the prescribed licensing fees and some submitted the required security guarantees”.

“After a year of not receiving their licensing certificates from NLA, this state of affairs incensed PSOs to organise a press conference in Accra. This press conference was seen as a national security threat according to the National Security Aparatus, Police CID and the government at large. After an invitation to the Bureau of National Investigations to give their statement, the PSOs and NLA were subsequently invited to mediation at the Police CID Headquarters in Accra in October 2019, to resolve the impasse.

“After four meetings, the parties agreed to set up a joint technical committee made up of four representatives each from NLA and the PSOs to resolve the impasse,” Mr Koduah said, adding that the Joint Technical Committee used eight weeks in finding an amicable solution to the impasse between the NLA and the PSOs.

African youth optimistic about the future

IPV is safe to protect children against Polio

Be circumspect in reportage — GJA