Heavy flooding in the Canadian city of Toronto nearly caused two men trapped in an elevator to drown.

Police rescued the two men who were standing on top of a handrail in order to stay above 6ft of water (2m) as rising waters flooded a basement below.

A police spokeswoman said there was "only one foot of airspace left" for the two to breath.

Elsewhere in the city, the police marine unit had to rescue drivers whose cars were flooding.

Police officers received a call on Tuesday evening that two men were trapped in an elevator in a basement on the north side of the city, spokeswoman Constable Jenifferjit Sidhu said.

When they arrived, they found the basement covered in water.

"Officers got a crowbar, swam to the basement and pried open the elevator door to come to the rescue," Const Sidhu said.

"Police rescued the two men with only one foot of air space left," she added.

They were taken to hospital and treated for non-life threatening injuries. 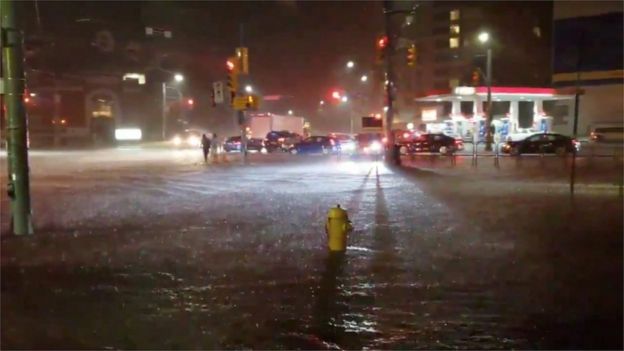 The dramatic rescue was not the only one of the evening.

Earlier, police rescued passengers from four vehicles that were completely submerged in water in a flooded underpass in downtown Toronto.

Environment Canada said 2.5in (64mm) of rain fell in just over two hours Tuesday night in some parts of the city, and rain continued on Wednesday morning.

I will champion the progress of women

Migrants strike in Italy after road deaths
Next Item